THIS STORY HAS BEEN FORMATTED FOR EASY PRINTING
Bruins 4, Canadiens 1 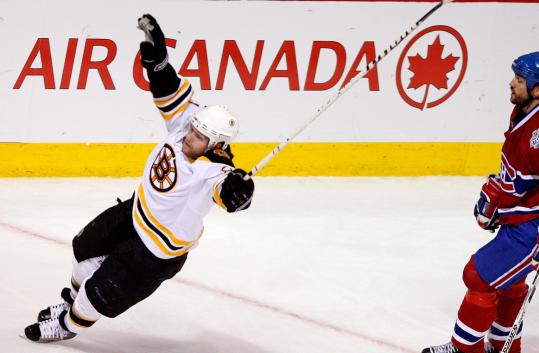 Phil Kessel appears ready for takeoff as he celebrates his goal at 11:58 of the second period, which gave the Bruins a 3-1 lead. (Globe Staff Photo / Barry Chin)
By Fluto Shinzawa Globe Staff / April 23, 2009
Text size – +

MONTREAL - On the dressing room wall at Ristuccia Arena in Wilmington, Mass., there is a magnetic board that is updated each morning with the NHL standings.

One offday during the regular season, when the slumping Canadiens were in danger of falling out of the Eastern Conference's top eight, Michael Ryder walked by the board.

"Montreal dropping," said Ryder out loud to himself. "Got to love that."

Ryder's satisfaction became even sweeter last night when the hated Habs, his former employers, fell off the board.

And now it's the team that saw its 100th season come to a whimpering close, the latest chapter slammed shut by a behemoth of a Boston club that rolled to a 4-1 victory before 21,273 at the Bell Centre and swept the NHL's most glorious franchise in their best-of-seven first-round playoff series.

It was only appropriate that Julien masterminded the discipline-first Bruins and Ryder drove the offensive bus by tucking two pucks behind a shellshocked Carey Price.

"There's a lot of pressure playing against his old team and maybe trying to be conservative," said Aaron Ward of Ryder. "But he stepped up. He's been great for us."

For the Bruins, this was a series about keeping their cool. In the last regular-season meeting, the Bruins, led by chief culprits Milan Lucic and Shawn Thornton, blew their tops and tried to deliver frontier justice to the Canadiens. Entering the playoffs, the Bruins knew the shorthanded Canadiens (missing defenseman Andrei Markov and center Robert Lang for the entire series, while forward Alex Tanguay and defenseman Mathieu Schneider sat out last night's game) would try to entice them into taking penalties.

"I think that was our biggest thing: discipline," said Marc Savard, whose team gave up only eight power plays, blanking the Canadiens on all eight. "We didn't talk to the refs. We didn't complain. We just went out and played hockey. We took some shots that we shouldn't have taken and there probably should have been more penalties. But we just kept playing and kept looking for the end result."

Conversely, the Canadiens gave the Bruins 16 power plays over four games. The Bruins scored on four.

It was also a sweep that underscored the Bruins' knack for timely goals and keeping their skates on the Canadiens' throats. Last night, for the second straight game, the thump-first Canadiens burst onto the ice and threatened to blow the Bruins' doors off. At one point, the Canadiens held a 13-4 shot advantage in the first period, with one of those attempts finding the back of the net.

Only 39 seconds into the night, top-line left wing Andrei Kostitsyn took a drop pass from captain Saku Koivu, took advantage of loose defensive coverage, and fired a shot past Tim Thomas (26 saves) to put the Canadiens up. But late in the first period, also for the second straight game, the Bruins punched back.

David Krejci, the lead man on a furious forecheck, forced defenseman Roman Hamrlik to cough up the puck in front of the Montreal net. The puck rolled out to Ryder in the slot. The right wing fired a blink-of-an-eye snap shot past Price (26 saves) at 17:27, a tying kick to the gut for a Montreal club that had been battering the Bruins.

It would get worse.

Krejci triggered yet another scoring attack by winning a puck battle against forward Christopher Higgins along the wall. Krejci gave the puck to Ryder, who drove wide of the net around defenseman Ryan O'Byrne. At the same time, Krejci drove to the net and made himself available at the far post. Ryder gave it back to Krejci, and the center slammed it home with 34.4 seconds remaining in the period, delivering the uppercut from which the Canadiens would never recover.

"We really calmed things down and talked on the bench to really settle down and go back to the way we can play," Zdeno Chara said of the rally. "Control the play, control the puck, and make good decisions with the puck."

The Canadiens had a second-period chance to tie the score when Phil Kessel was sent off for slashing at 9:51. But the Bruins killed the penalty, and just as Kessel stepped out of the box, Patrice Bergeron pinballed an indirect pass off the boards to his streaking teammate.

"Knowing that the penalty box is on the opposite side, I knew he would go across the ice," said Bergeron. "I just banked the puck. I didn't see him exactly. I knew he was going to be there."

And that was that.

"It's not easy to sweep a series," said Julien. "We know that they were a team that was pretty banged up. But the way they came out in the first period, we knew they weren't going to roll over and die. They were going to give us everything they had."

The Bruins have today off, a gift to rest their bodies and their heads as they prepare for their second-round opponent, which may be the Rangers (up, 3-1, over Washington). For Julien, who turns 49 today, the rest day was an early birthday present from a team that dismantled the Canadiens with fearsome efficiency.

How sweep it is.