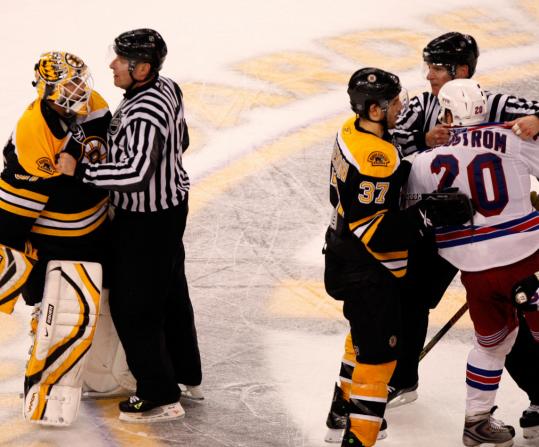 Tim Thomas (far left) was separated from Sean Avery (far right), who had to answer to Steve Montador after whacking the Bruins goalie in the head with his stick. (Barry Chin/Globe Staff)
By Kevin Paul Dupont April 5, 2009
Text size – +

It wasn't Tim Thomas's birthday, but hey, who needs a cake when the boss smiles and hands you a $20 million guarantee? Thomas, who won't turn 35 for a few more days, can live every day the rest of his life as if it's his birthday now that he has his new contract to keep him in Boston.

Nonetheless, Sean Avery felt yesterday was the perfect time to give Thomas one to grow on - specifically, a smack to the back of the helmet as the Bruins' No. 1 goalie was stretching his legs during a TV timeout in the third period.

"Unwritten rule," Thomas mused, following his 31-stop afternoon and a 1-0 win over the Rangers that led to the Bruins clinching the Eastern Conference regular-season title. "Nothing happens during TV timeouts."

Like most parts of the rulebook, the TV timeout rule hasn't been committed to memory by the pugnacious Ranger forward. With Thomas some 30 feet out in the slot, stretching his hamstrings, Avery oh-so-subtly cruised up from behind and smacked his stick to the back of Thomas's head.

"You look up and see who it is," recalled Thomas, "and you're like, 'You've got to be kidding me.' So it was just reflex."

More to the point, it was emotion, which is something Bruins coach Claude Julien said he wishes Thomas could better control in such circumstances. Julien fully appreciates the Thomas spunk, but he would prefer him to leave retaliation to his teammates. Some three weeks earlier in Columbus, Jiri Novotny put a smack on Thomas behind the net and no one in Black and Gold made the big Blue Jacket forward answer for it.

With the Avery cheap shot ringing in his ears, and rattling around the back of his helmet, Thomas decided to answer this one for himself.

"There are some lines that can't be crossed," said Thomas, who graciously gave Avery credit for his gritty, and usually fair, play around the net during the times when there weren't TV timeouts. "He has a hard time figuring out what the lines are."

That, of course, is an Avery trademark. In a fit of calm, and no doubt calculation, the 28-year-old Avery temporarily lost his NHL career some four months ago while he was with the Dallas Stars. Before a Dec. 2 game in Calgary, he made a vulgar remark about his ex-girlfriends, which was promptly followed by a league-mandated suspension and therapy for anger management.

Obviously, Avery's therapist forgot to mention the part about goalies being in vulnerable positions. Only the Rangers, desperate to make the playoffs, were willing to give Avery another shot at work, and even then the Stars had to agree to pick up millions in salary just to waive him good-bye.

"Yeah, sure, it's, 'I did it by accident,' " said Thomas, interpreting the nonchalant manner and sweet-faced innocence with which Avery delivered the smack. "Yeah, sure, come on . . . like anyone would believe that's an accident."

Thomas quickly pulled up out of his stretch and raced up from behind on Avery, then followed through by using his bulky glove hand (left) to smack Avery on the side of the head. Blueshirt winger Fredrik Sjostrom, he of a rather courteous and nondescript 30 penalty minutes this season, entered the fray as if to support Avery. The incensed Thomas, of little mind to bargain or mediate, promptly smacked Sjostrom in the kisser with a rabbit punch.

Thomas, the more he grows into the job, and up the scale of respect around the league, takes on the air of Battlin' Billy Smith, the great backstop of the Islander dynasty during their four Stanley Cups (1980-83). Off the ice, Thomas is far more gregarious than Smith ever was, but on the job, he's got that little flip factor that sometimes leads him to be liberal with his sticks and shoves.

Most nights it is all of little consequence, but his attitude has a valuable way of getting opposing forwards to watch their feet and backs when they are around his cage. Nothing wrong with that.

Avery, said Thomas, earlier gave him a poke to the back of the legs. He also witnessed a similar poke that Avery delivered to young defenseman Mark Stuart in the neutral zone.

"You know, it's all an accident," said a sardonic Thomas. "And we should believe it, because it's Avery."

Avery had nothing to say to the media. A Ranger spokesman shooed reporters when they approached Avery after the game. Blueshirt coach John Tortorella, his team clinging to relevance in the East, figured Thomas should have been assessed an extra two minutes (both combatants were assessed minors). That sounds like the funny math that Bernie Madoff once employed, before he began scratching his computations on a cell wall.

The way it looks right now, if the Rangers make it to the postseason, they'll meet the Bruins in the first round. If so, that means more Avery, more sweet looks, and more accidents.

And if that doesn't sound like enough, even the TV timeouts will be worth watching.