THIS STORY HAS BEEN FORMATTED FOR EASY PRINTING
Bruins 3, Lightning 1

Bruins show a lot of spark against Lightning 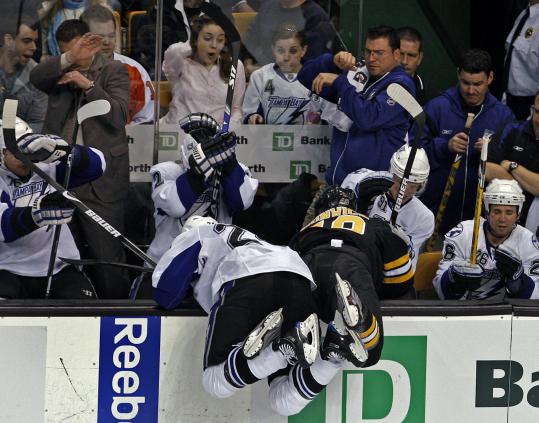 Tampa Bay's Matt Pettinger (left) and the Bruins' Matt Hunwick either are searching for a contact lens or they're about to land on the Lightning bench. (Jim Davis/Globe Staff)
By Kevin Paul Dupont Globe Staff / April 1, 2009
Text size – +

The Stanley Cup playoffs are but two weeks away, and the Bruins, some 37 years past their last rhumba with the Cup, appear to be shaping into a formidable postseason contender.

Case in point: Last night's 3-1 dusting off of the lowly Tampa Bay Lightning, who these days are playing for 2009-10 paychecks and possibly the first pick in the June draft (be afraid, John Tavares, be very afraid).

Paced by goals from Blake Wheeler, Zdeno Chara, and Chuck Kobasew - the latter two delivered by a red-hot power play - the Bruins won for the fourth straight time and have lost only once in regulation over the last eight games (6-1-1).

"We are getting better," said coach Claude Julien, whose club could clinch the Eastern Conference regular-season title tomorrow when the Senators are in town. "There's no doubt there."

No doubt that the power play, all but dormant in stretches of February and March, is a big part of this late-season renaissance. The Bruins were 2 for 6 on the advantage against the Bolts, and they are now 7 for 15 (46.7 percent) over the four-game winning streak that numbers New Jersey, Toronto, Philadelphia, and now Tampa as its victims.

Julien these days has two potent power-play units, one with Mark Recchi, Marc Savard, and Michael Ryder up front with Matt Hunwick and Dennis Wideman at the points, and the other with Patrice Bergeron, David Krejci, and Kobasew up front with Andrew Ference and Big Z at the points.

If the Bruins keep up their rhythm, they could be too much for anyone in the East to handle right on into May, and could stack up well against the talented likes of, say, San Jose or Detroit in the West.

OK, that's getting ahead by a smidge, isn't it? Especially for a club that has made it beyond the first round only once in the last 15 years. But as the Garden crowd of 16,996 witnessed last night, it is a squad with growing confidence and pluck, even with its speediest, highest-scoring winger, Phil Kessel, out of the lineup with an undisclosed injury until at least next week.

If they have clinched the Eastern title by then, it wouldn't be a surprise to see Kessel (believed to have a bad shoulder) stay on the sideline until the start of the playoffs (most likely April 16).

An added plus last night was Manny Fernandez's second win in as many starts, something the Boston netminder had not experienced since Jan. 1 and Jan. 8. After winning a shaky outing in Toronto Saturday (7-5), Fernandez looked more composed and confident on home ice, snuffing out 23 shots until Steven Stamkos lifted a Ryan Malone rebound by him with 12:07 gone in the third period.

Having a competent Fernandez would allow workhorse Tim Thomas to get adequate rest prior to the postseason, and he could also provide assistance, if necessary, for the playoffs.

"I felt different today for some reason," mused Fernadez, who has been fighting both puck and confidence, as well as injury, for the last couple of months. "You work hard for a period of time and the balance changes over. I've just got to keep it up and grind it out."

The Bruins took a 1-0 lead with 14:03 gone in the first when Wheeler followed up a Savard attempt at the right post with a quick backhand swat that netted the rookie his 20th goal.

"Savvy made a smart play calling for the puck," said Wheeler, who labeled No. 20 a "neat" milestone. "I was just at the right spot and got a good whack at it."

The killer strikes, both on the power play, came in a stretch of less than seven minutes in the second period, the first with Evgeny Artyukhin (high-sticking) in the box and the other with Richard Petiot (hooking) in the box.

On the first, by Chara, the Boston captain pressed in from the right point and slammed in a textbook backdoor feed from the skillful Bergeron at 6:56. The second, recorded by Kobasew, came off a deflection of a one-time blast from the point by Chara, who was set up by a delicious feed from the soft-handed Krejci (two assists).

After a slump that ran some six weeks, Krejci is now 1-6 -7 in the last three games, in large part because of his growing confidence and effectiveness on the power play.

"The first one, Bergy made a beautiful play and a really nice pass," said Chara, who earlier tangled with Artyukhin in a monster mash fight in the neutral zone, after Artyukhin smacked Krejci in the head. "The second one, we just tried to move the puck, and any time we thought we had a chance to shoot . . . we [took] it."

The victory lifted Boston's point total to 108, a 9-point lead over No. 2 Washington and 10 over New Jersey. Only six games to go before the second season officially starts, even if the Bruins already seem to have started their run.