Rusty Fernandez may get to work out kinks 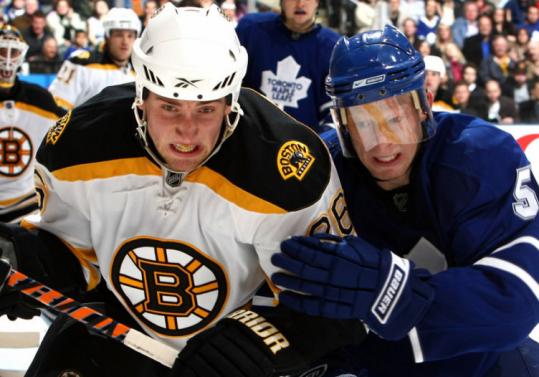 TORONTO - Manny Fernandez was a surprise starter in the Boston net last night, but it won't be a surprise if the inconsistent backstop gets a couple more starts in the final two weeks of the regular season.

"We want both of our goalies to be in a position of strength," said coach Claude Julien, noting he'd like to use Fernandez again over the final eight games. "That will allow Manny to find his game, and it will allow Timmy [Thomas] to get his rest."

Fernandez looked shaky for much of the first period en route to his 7-5 win over the Leafs. But he gave up only two goals on 24 shots across the second and third periods, his game showing slight signs of confidence and consistency.

"He was a little rusty, but he battled through it," said Julien. "I thought he made some good saves in the third period. He did a lot of good things. I don't think he was as bad as the score indicated."

Montador punches in
Steve Montador, acquired at the trade deadline from Anaheim to help add depth to the Boston back line, played right wing on the No. 4 line with Shawn Thornton and Stephane Yelle. He didn't factor in the scoring, but he logged 10:14 of ice time and he took on strapping rookie defenseman Luke Schenn in a fight with 10:35 gone in the third period.

"Just try to keep it simple and be physical," said Montador, who played about half of last season as a forward with the Ducks. "Overall, I felt pretty comfortable out there."

In the midst of the fight, television cameras caught Maple Leafs general manager Brian Burke with binoculars trained on the combatants. The ex-Ducks' GM appeared to have a slight smile on his face as he lowered the glasses.

"You know Burkie," said Montador, "he likes his fights."

Rolling sevens
It was the fifth time this year the Bruins have scored seven (or more) goals . . . Milan Lucic, who picked up a pair of assists, registered four hits, tying Michael Ryder for the team high. Schenn led the way for Toronto with five . . . Dennis Wideman (three assists) and Patrice Bergeron (no points) were the only Bruins without a shot on net . . . Montador's inclusion as a winger left rookie Byron Bitz on the sideline, along with veteran defenseman Shane Hnidy . . . Look for Thomas to get the start tonight in Philadelphia.
Defensive gem
Selected members of the Professional Hockey Writers' Association will make their picks for the NHL's 2008-09 awards two weeks from tomorrow, and this could be Zdeno Chara's year to walk off with the Norris Trophy as the best defenseman.

Chara, the 6-foot-9-inch tower of power, is the game's No. 1 shutdown defenseman. If the award was based strictly on taking care of the defensive end and intimidating and closing off opposing forwards, Big Z would be a lead-pipe cinch to win his first Norris (his best finish was runner-up to Scott Niedermayer in 2003-04).

However, the award encompasses more than defensive skills, which is why Detroit's Nicklas Lidstrom has won six of the last seven (following three seasons in which he finished runner-up). The slick Swedish blue liner, a key reason the Red Wings won the Stanley Cup in 1997, 1998, 2002, and 2008, has been much more of an offensive force during his career, and at 38, he remains one of the top back-line point producers.

"The first time I was among the finalists - I think it was 2002-03 - I was like, 'Wow, I never thought I would be considered,' " recalled Chara. "There have been so many great defensemen during my time in the league . . . guys like Lidstrom and Niedermayer and [Chris ] Pronger, and when I got in the top three, it was, 'Wow, this is something that's possible,' and then it became, 'Wow, I'd like to win it.' "