THIS STORY HAS BEEN FORMATTED FOR EASY PRINTING
Bruins 7, Maple Leafs 5

Raking Bruins do a spring cleanup on Maple Leafs 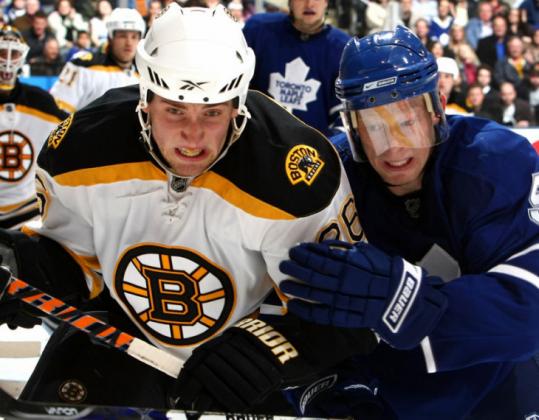 TORONTO - Nearly a week off helped the Bruins recapture their scoring touch, and it also sent them into a slight defensive tailspin, all of which was on display at Centre last night as the Eastern Conference leaders handed the Maple Leaf woebegones a 7-5 loss before a sellout crowd of 19,360.

Led by a pair of Mark Recchi power-play goals, and three assists each from Dennis Wideman and Matt Hunwick, the Bruins rallied from deficits of 1-0 and 3-2 for their 47th victory this season. They also overcame some shaky goaltending by Manny Fernandez, who made his first start since his loss to the Rangers in a nearly slapstick-like performance almost three weeks ago at Madison Square Garden.

The victory ended a string of five Boston losses on the road and it tightened the Bruins' grip on first place in the conference. With but eight games left on the regular-season schedule, they may not have a stranglehold on the top spot, but now, with 104 points, they likely could lock up the conference title even if they play only .500 hockey the rest of the way.

"Not the way we want to play," noted Recchi, now with six goals since joining the Bruins March 4 in the trade that sent Matt Lashoff and Martins Karsums to the Lightning. "But we're never not going to take the win, obviously. We just didn't play the way we're capable of playing, especially defensively."

Both sides could claim their share of defensive blunders and breakdowns, as well as, shall we say, spotty netminding. Fernandez, who looked out of synch on two of Toronto's three goals in the first period, made it through the full 60 minutes, while rookie Justin Pogge, the Toronto starter, was yanked after a three-goal blitz in the second period boosted Boston's lead to 6-4. Curtis Joseph played the final 27:16 and gave up but one more Boston goal.

"It was a battle from the drop of the puck," said Fernandez, who pinned up his first victory since Jan. 8. "Those first few minutes . . . I don't know what it is . . . it goes well in practice, but for some reason I get in a game, and I have to expect the unexpected. It's not maybe [something will happen], it's going to happen. It was a tough night - and some nights you have to battle."

The Bruins bolted to a 2-1 lead on Chuck Kobasew and Michael Ryder strikes, but John Mitchell knotted it on a power play at 12:04 of the first when he was left with a wide-open right side. Less than five minutes later, Fernandez overreacted on an Alexei Ponikarovsky snap shot on the left side, a shot the goalie should have fielded easily with a glove stop or deflection. But with 27 seconds left in the first, Recchi brought it square, 3-3, when he tipped home a Hunwick shot from the point.

"That's what [Recchi] does," said coach Claude Julien, who was looking to add some front-of-the-net moxie when general manager Peter Chiarelli dealt for Recchi at the trade deadline. "He throws his body around out there. He's 40 years old, and he still gets in those dirty goals and in all the dirty areas out there. That makes everyone want to do that."

The Leafs needed just more than six minutes of the second to knock home the 4-3 lead (Ponikarovsky again), but then it all fell apart for the southern Ontario also-rans when Recchi, Shawn Thornton, David Krejci, and Blake Wheeler ran off four straight goals in a span of 8:03, building a 7-4 margin with just less than three minutes to go in the period.

Amid the deluge, Leafs coach Ron Wilson called a timeout when Thornton wristed home the 5-4 lead at 11:30. Not that the break did the embattled Leafs much good. Only 1:14 later, Krejci, nearly stone-cold on offense for two months, rushed in to sweep the 6-4 lead through Pogge's pads. The game was all but gone, and so was Pogge, replaced by CuJo.

Thornton's goal was his first since Feb. 1, ending a streak of 22 games in which he did not pot a puck. Rarely do his goals lead the other team to take a timeout.

"C'mon, all my goals do that," said the self-effacing Thornton. "Any time I score, the other team's panicking, they're thinking, 'If that guy gets one, anyone can.' "