A hurting Lucic did not pull any punches 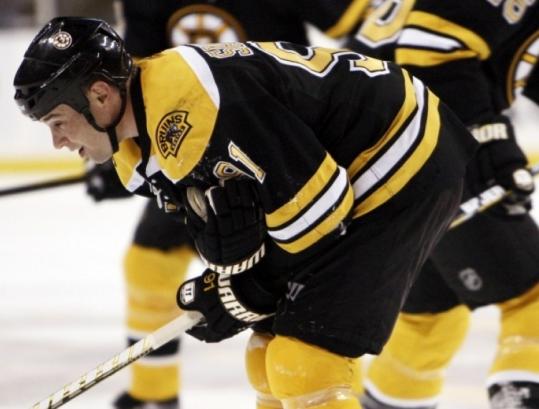 WILMINGTON - The Code dictates that when one combatant goes down in a fight, the other should refrain from throwing punches. But at 14:49 of Thursday's second period, with the Ducks down, 3-0, Milan Lucic saw Mike Brown tumble forward and hit the deck, but proceeded to hammer him with a barrage of right hands to the back of the head.

That's because Brown, counter to The Code, had thrown an early right (he was called for instigating, fighting, and a 10-minute misconduct) that tagged an unsuspecting Lucic square on the jaw, prompting the second-year winger to blow his stack.

After the fight, Lucic did not return to the game. He is questionable for today's matinee against Washington at TD Banknorth Garden, suffering an upper-body injury - the big winger had cuts on his right hand - that occurred during the fight.

Earlier in the period, Marc Savard took a tumble into the boards when he was rolled by heavyweight George Parros. After the hit, Savard left the ice doubled over. He returned to the bench, but didn't take a shift in the third and is also considered questionable today because of an upper-body injury. Neither of the top-line forwards practiced yesterday at Ristuccia Arena.

Also absent was Blake Wheeler. In the first period, Wheeler took a Chris Pronger slap shot off his foot that left him hobbled. Wheeler finished the game and said he was fine, but he was given yesterday off. Coach Claude Julien said Wheeler should be available today.

Lucic missed seven games last month because of a shoulder injury. He sat out against Ottawa Feb. 5 after taking a shot off the foot the night before. Savard, the team's leading scorer (21-46 -67), is one of seven Bruins to appear in every game this season. Wheeler also has not missed any action.

Yesterday, the Bruins brought up Vladimir Sobotka from Providence on emergency recall and placed Petteri Nokelainen (eye) on injured reserve. Matt Hunwick, who appeared in his first game since Feb. 7 Thursday, skated at forward alongside Martins Karsums on a makeshift fourth line. On Jan. 27 against Washington, Hunwick played on the fourth line in his only game as a forward this season.

"We don't know what we're going to have [today]," Julien said after practice. "But no matter what, we're still a good enough team to win hockey games. It doesn't matter who you put out there. I think we've got enough depth that if every individual plays to his level, we should be fine."

Limiting Ovechkin
Alex Ovechkin has 44 goals, and hopes to reach 60 for the second straight season. But only one of those strikes this season (an empty-netter) has come against the Bruins, no doubt a result of playing against Zdeno Chara, but also a function of thorough team defense.

"I don't think it's done too much damage for us, because if you look at the games, he hasn't scored that way," Julien said of Ovechkin's preference to curl in the offensive zone and slash into the high slot.

"We have back pressure that we use a lot when guys stop. Our forwards come in and play him so we don't get our D's sucked up into that [area]. We have a way of defending against him that works well for us. It's worked well against him so far after three games. Hopefully, it will be the same [today]."

Aaron Ward, who should also be matched against Ovechkin, said the winger is especially dangerous in close quarters because of his powerful stride.

"It's his short-distance speed," Ward said. "Most guys have to come out of the move. He's already coming out of the move as he's crossing over. When I was with the Rangers two years ago, he'd go down the left wing and cut across the middle. If you gave him too much room across the middle, he'd take the short side. If you were playing him tight, he'd just keep going. Your speed backward doesn't match his speed forward."

Habs add Metropolit
Montreal claimed ex-Bruin Glen Metropolit off waivers yesterday from Philadelphia. The Flyers placed the center on waivers to clear cap space for forward Daniel Briere. Metropolit (4-10 -14 in 55 games for the Flyers) is in the first season of a two-year, $2 million deal. "Glen is a seasoned veteran who played very well against us in last year's playoffs against the Bruins," Montreal general manager Bob Gainey said in a statement. "We are very pleased to have him on our roster." . . . Tim Thomas is expected to start his third game in a row. "Last year, we put Tim in a lot of situations where he got tired," Julien said. "When Timmy gets tired, he's like anyone else. He doesn't perform at the top of his game. As long as we have that luxury of being able to put someone else in net to do the job and give Tim some rest, Tim's going to play well. That's why he's been consistent. He'll be the first guy to tell you that he feels a lot better at this time of year this year than he did last year." . . . Ward, knocked out of Thursday's game because of flu-like symptoms, returned to practice . . . Chara and Andrew Ference will make donations to Right To Play based on the ice time they receive against the Capitals today. Ference will pledge $100 per minute, although Chara had not decided on an amount. Given Chara's expected matchup against Ovechkin - the Washington winger will also donate to Right To Play based on ice time - the captain should be getting plenty of action.