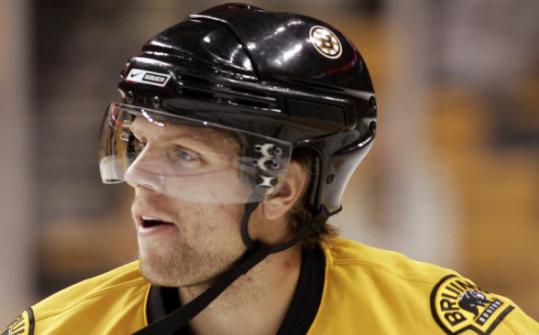 WILMINGTON - Phil Kessel has had enough of tracking his teammates on television.

"I hate watching," said Kessel. "It's tough when you want to be out there helping your team. But the boys did a great job."

On Tuesday, prior to the Bruins' 3-2 overtime win over Washington, Kessel got some good news when he was cleared to play by team doctors. Yesterday at Ristuccia Arena, he went through his first full practice with his teammates since his last game, Jan. 10 against Carolina. Barring a last-minute change of plans, Kessel will be back in the lineup tonight against New Jersey after missing only six games because of mononucleosis.

Kessel, the team's leading goal scorer (24-17 -41 in 42 games), was originally expected to miss a month. However, he thought he was suffering from mononucleosis for several weeks before he was diagnosed.

"I didn't feel very good for a while," Kessel said. "Just wasn't feeling like myself."

In the last nine games before he was sidelined, Kessel totaled only three goals and one assist. Prior to the nine-game stretch, he had scored at least 1 point in 18 straight games.

"I thought I had it for a while," said Kessel, who had been skating on his own prior to yesterday's practice. "I went in there probably about a month before. They said no, but I knew I had it. Whatever, though. It's finished now."

Yesterday Kessel practiced on a line with Milan Lucic and Patrice Bergeron. If he plays tonight, he is expected to be reunited with regular center Marc Savard, who was given yesterday off along with the team's three other All-Star participants (Zdeno Chara, Tim Thomas, and Blake Wheeler). Kessel should be back in uniform one game after the Bruins welcomed Lucic, Bergeron, and Andrew Ference back.

Kessel wore a protective wrap around his midsection for precautionary purposes - contact to the spleen is dangerous for patients with mononucleosis - but was involved physically in two-on-two and three-on-three drills down low. He stayed on the ice after practice for some skills work with assistant coach Doug Houda.

"He hasn't done much over the last couple of weeks, so it's more about timing," said coach Claude Julien of Kessel. "That's what we tried to do with him at the end of practice, having him work on his skills and handling the puck to see if we can help him get his timing back."

On the bubble
Byron Bitz, who threw down with heavyweight Donald Brashear for his first NHL fight Tuesday, could be facing an assignment to Providence as the Bruins return to full health.

"I try not to think about that," said Bitz (0-1 -1 in seven games). "I don't look too far ahead in the schedule just because it's day by day for me. I'm just trying to enjoy every day. I don't worry too much about getting sent down. Just trying to get more comfortable as we go along and try to do what I can."

Bitz, more of a skilled player at Cornell (he manned the point on the power play), said it took some time to adjust to a conservative, pro-style game, but credited ex-Providence coach Scott Gordon and then-assistant Rob Murray for helping him learn the basics last season. Julien has praised Bitz for being responsible defensively, finishing his checks, and making safe plays, while Shawn Thornton gave him props for accepting Brashear's challenge.

"It shows about his character," Thornton said. "I know the guys love having him in the room and love having him on the team. I know I love playing with him. I can't say enough about that kid. He has great character."

Right of center
One day after playing right wing for the first time since he was a rookie in 2003-04, Bergeron was back at center. He counted Brian Rolston and Michael Nylander as two of his centers during his rookie season. In 2005, Bergeron centered Sidney Crosby and Corey Perry for Canada in the World Junior Championships. During the 2006 World Championships, he served as Crosby's wing along with former teammate Brad Boyes. Bergeron said one of the biggest adjustments of playing wing Tuesday was stopping and starting instead of flowing as a center . . . Michael Ryder practiced after missing Tuesday's win because of flu-like symptoms. Ryder said he felt better and was kept away partly to prevent teammates from catching his illness . . . Petteri Nokelainen didn't practice because of an undisclosed injury. Nokelainen is questionable for tonight. "I don't think we're going to write him off, but I can't honestly say that he's for sure [tonight]," said Julien . . . With Thomas given yesterday off and Manny Fernandez sidelined because of back pain, goaltending coach Bob Essensa manned the crease opposite Tuukka Rask.