The first-place Bruins are after something bigger than wins: Making an old hockey town believe again 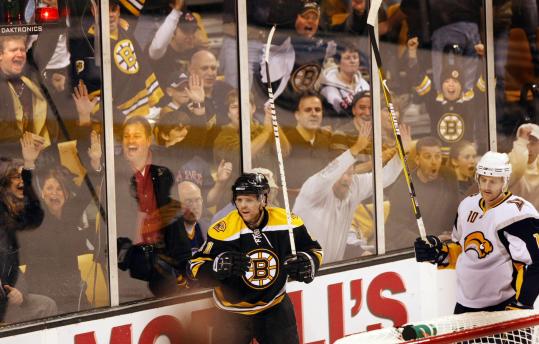 The line of fans stretched from the TD Banknorth Garden Pro Shop down the length of the arena, curled left, and extended another 30 yards into the cold fall air. Some waited almost two hours in the 34-degree weather. Some took their children out of school. One family drove 12 hours from Ontario just for the chance to meet some players from their favorite team and buy the latest souvenir jersey.

A black and gold jersey, no less.

Something strange is happening in Boston. The Bruins matter. A proud, old hockey town has rediscovered its pulse. When was the last time anyone could say that?

This young and feisty team has vaulted to unexpected relevance with 18 wins in its first 26 games, and to first place in the National Hockey League's Eastern Conference. Built from the ground up by a revitalized front-office team, the new Bruins aren't exactly big or bad, but they have so far showcased the essential elements of success on ice: shifty scorers, a fists-up enforcer, a towering defenseman, a rock in goal. And not one household name in the bunch. Not yet.

Average attendance is up 10 percent; pro shop sales, 30 percent. Home game sellouts are no longer a dream but a growing expectation. Even the team's flatline TV ratings, rivaled only by the New England Revolution for local sports broadcast oblivion, have begun to perk up.

It's enough to make Cam Neely jump out of his seat.

A relentless presence, Neely was the team's big scorer when it was last a championship contender, 18 years ago. And with his mix of flash and passion and grit, he was a direct link to the days when the Bruins really were NHL champions - 36 years ago, in the Age of Orr.

Today, Neely is the team's vice president, one of those trying to return the franchise to something like its old self. Watching a recent game from his skybox perch, he could barely contain himself, leaping up with every up-ice rush, flinching at every miscue, shouting "yes!" at every Bruins score. Restless, writhing, impatient, it was as if he embodied the rising stakes for the team - the rekindled hopes to sustain, the doubts of a generation to overcome.

In the stands below him, two fans hold a sign. "Boston can believe again," it says.

It is general manager Peter Chiarelli's job to make the answer, yes. Every good team needs an architect and that is the GM's charge, as he enters his third year on the job. He is a steady presence, a big believer in long-term planning, which is a pleasant change for fans turned off by the team's sometimes inexplicable personnel shuffling in recent years.

He is also a big believer in keeping things simple. He admired last season's miracle on the Green end of the Garden, as the Celtics went from league worst to league best, after acquiring two all-star players in a pair of blockbuster trades. But he knows that sort of quick turnaround simply doesn't happen in today's NHL.

"There's nothing magic about this," said Chiarelli, who came to Boston from the Ottawa Senators. "You've got to go out and beat the bushes for the players, make sure people are on the same page internally and on the ice and grind it out. It's hard to do that Celtics-type trade. You can't do that in hockey."

When Chiarelli arrived in the summer of 2006, he wanted young players and "character players" who took pride in the Bruins jersey, gave the team an identity, and fostered chemistry. He talked about retooling, not rebuilding, because he thought "stripping it all down is a risky proposition" that could create an environment where young players pick up bad habits and become accustomed to losing. He envisioned a hard-working, defense-first team, acquiring players like captain Zdeno Chara, recognized as one of the NHL's top defensemen and, at 6 feet 9 inches, the tallest player in league history.

The players he has acquired have quickly coalesced into a team that management and coach Claude Julien like to describe simply as "tough to play." Last season, the Bruins proved that, taking the Montreal Canadiens to seven games in the first round with an astounding four-goal, third-period comeback in Game 6. The comeback set the stage and the tone for the resurgence that would continue this season. There already have been a host of memorable moments, from the 6-1 dismantling of mighty Montreal last month, to last Saturday's romp over the reigning royalty of the NHL, the Detroit Red Wings.

Still, the doubts linger. It isn't so very long ago that this was a team that fully deserved its obscurity in a city grown accustomed to professional sports champions. "We weren't a team that was [worthy] of representing the Boston Bruins," said defenseman Aaron Ward, recalling the state of the Bruins just two seasons ago. "You can't blame people for not coming and not caring."

And then there is the question of ownership. All the other local teams that have tasted championship champagne have done so under new owners determined to win, and prepared to pay the price to do so. The Krafts in Foxborough, the John Henry group at Fenway, Wyc Grousbeck and company with the Celts. But the Bruins ownership remains firmly in the hands of the Jacobs family - team chairman Jeremy Jacobs is in his 34th year of ownership, still in search of his first Stanley Cup - which is viewed by many fans as a flinty group, more willing to off-load star players than shower cash on them.

There are hints of change on that front, too.

"I have as much pride of authorship of this team as Peter, Cam, and the rest of the group," said executive VP Charlie Jacobs, the owner's son. "We're on top of the world today. We're sitting in a good place. Let's hope we feel the same way at the end of the year. If we do, we'll re-up so to speak."

It's hard to remember how big hockey once was in this town, especially in the early '70s, when the team, one of the original six franchises in the league, sported both the game's greatest superstar in defenseman Bobby Orr, its most prolific scorer in Phil Esposito, and a complementary cluster of lesser stars. Gerry Cheevers. Ken Hodge. Derek Sanderson.

It didn't take much effort to build a fan base in those days, especially in a city like Boston where schoolboy hockey and youth leagues flourished. Team legend Johnny Bucyk recalls every game as a sellout and constant chatter about the team around town. In those days, Orr's number 4 was as ubiquitous an emblem of the region as Ted Williams's number 9.

Rebuilding the fan base today is much harder work, though the base of youth hockey enthusiasm remains very much in place.

And so it was no small accomplishment that a long line of loyalists queued up on Nov. 24 for a fan event, where they were promised a chance to buy the team's new third jersey - and to meet players like Chara, forwards Milan Lucic, Patrice Bergeron, Marc Savard, Blake Wheeler, and Phil Kessel, and goalie Tim Thomas.

For the Bruins' sales and marketing team, the Pro Shop event's success was a small victory in its ongoing campaign to win new fans and reengage old ones. When the hockey side retooled, the business side restructured, shedding its outdated "If we win, they will come" philosophy. The Bruins increased their sales force, collected data on fans, launched targeted ticket sales campaigns, and marketed the new "character players."

Following the lead of the on-ice product, the sales force stayed aggressive with calls and e-mails, most emanating from the "2 MILLION DOLLAR" room at the Bruins offices. The name refers to one of this season's ticket revenue goals, which would double last year's take.

Entering the 2008-09 campaign, the Bruins season ticket base increased more than 40 percent from last season to more than 8,000. Season sales had been declining since the new Garden opened in 1995, from 14,000 to just over 6,000. Overall attendance is also up, and the last two home games were sellouts. Even scalpers are seeing increased demand and marking up tickets $10 to $20 for weekend games at the Garden.

"As players, we look out in warm-ups to see how many fans are coming into the building," said Ward. "We want to make this building a tough place to play. You've got fans that are ravenous."

Given the economy and desire to keep seats filled, senior vice president of sales and marketing Amy Latimer foresees the Bruins "keeping the pricing structure for next season basically the same."

The team relies heavily on market studies and database work to devise its marketing approach, she said, but everyone knows the formula is ultimately pretty basic. "The winning team is where you reach the tipping point," she said.

But it also matters what kind of winning team it is. An aggressive, unselfish, playoff-focused team. There are Bruins billboards at all interstate entrances to the city that proclaim, "We Want It As Bad As You." That appeal to old-school hockey sentiment resonates with Bruins fans in the stands, who appreciate the current team's hard-working style.

TV viewers seem to savor it, too. NESN has seen the average household rating for Bruins hockey increase 27 percent over last year through the same number of games, though the ratings still pale in comparison with the other pro franchises in town. The Celtics, for example, draw about twice as many viewers.

For Chiarelli, it made sense to tap Bruins nostalgia when building for the future. He has sought a blend of finesse and toughness, and so far the team has delivered, scoring more goals than any other Eastern conference team through the end of November and allowing the fewest.

"It was important that we established an identity and that there was a link to the Bruins of old," said Chiarelli. "Part of that is because that's what the fans want. Another part of it is that it's entertaining to watch. Another part is that you'll have success if you follow through with that plan."

But while he is optimistic about the team he has, he is not about to overpromise that it is the team fans dream it could be. It is too early for that kind of talk.

"There's an improvement curve and we're on it," said Chiarelli. "The grade of improvement has just steepened . . . I've seen fans lately saying: 'This can't last. Let's be careful. Let's not anoint these guys.' I understand fans' reaction. We've got to perform. But we're progressing. Let's see where it takes us."