Keeping the Bruins, and their skates, sharp 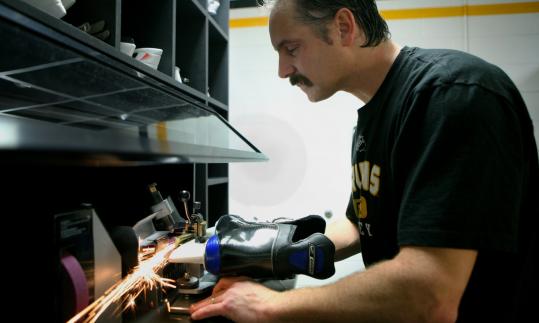 As equipment manager for the Boston Bruins, Mark Dumas estimates he does about 80 loads of laundry a week, including everything from towels to practice jerseys. But taking care of sweaty gear is only part of his job.

Dumas also needs to make sure that all the other equipment - skates, sticks, pucks, helmets, pads, and more - is ready for a tough outing on the ice. With a practice rink in Wilmington and games at TD Banknorth Garden, he needs to keep a close eye on those XXL Reebok pants and skate laces to make sure that the supply never runs out. For hockey pucks alone, this means ensuring that 20 or more pucks are handy for a single game, which adds up to 3,000 game pucks and 10,000 practice pucks for the season.

Dumas is the guy who orders not just the pucks, but the chewing gum, hockey tape, and Gatorade. He also makes sure that the video equipment shows up on time and, of course, that all the skates are sharpened and free of nicks. The skate sharpening alone is a time-consuming endeavor, to make sure each player has the kind of edge they prefer, and that the skates are in top condition.

Dumas says that an National Hockey League equipment manager can earn from $55,000 to $120,000 a year or more depending on the team and location, and that one of the common misconceptions of his job is that he just sits on the bench and watches the game.

"'Man, you have the best job,' is what I'll hear; but what they don't see is when you're at the rink at 3 a.m., unpacking a wet bag, and getting only three to four hours sleep, because you have to be back at the rink in a few hours for practice," says Dumas.

Like the players, he's on the road constantly - "today it could be Chicago, tomorrow onto Vancouver" - slogging through the season from September all the way until May. "It's tough, you're tired of being on the road for so long, and when you walk in the door, there's no one to greet you, no dog or kids," says Dumas, who lives in upstate New York.

This sounds like the kind of job a hockey fan would love to have. How did you get to be an equipment manager?
I played hockey when I was younger, but after a while, it was apparent that I wasn't good enough to go pro, so I started hanging around the rinks. One day, a trainer said to me, "You're here more than we are, why don't we give you a job?" And I said, "Yeah, why don't you?" And that's how it all started.

This is sort of an obvious question, but why is equipment so important in hockey? The last thing you want to think about on the ice is that something is not going to hold up when you're going full speed out. Like Patrice Bergeron, our forward who skated for the first time since suffering a severe concussion. I spoke to him before he went out there, and he said he was really nervous. After he came off the ice, he said, "First period, I was scared, not knowing how I'd feel, but I have more confidence now." When we were in Montreal last season, he actually went to the Reebok factory and had a helmet designed just for him. Guys are getting bigger and stronger, and there's a need for better equipment and better gear.

What do you supply to the players that people may not think of? We always have to provide chewing gum - bubble gum and sugarless gum; I get them in those big containers of 300 pieces. And, maybe I shouldn't tell you this - a lot of sports frown on it - but we supply them with Red Bull as well. We have to set up the locker room with a full set of everything, from 120 towels to 20 rolls of each color tape, as well as hot packs, ice bags, bottled water, whatever you can think of. Ditto for the visiting team's room as well.

What about when you're traveling?
Let's say we're practicing up in Wilmington. We'll leave out of Hanscom, so I'll pull the skate bags and duffle bags out and leave them right in front of the player's stalls, so they can undress and put the stuff right into the bag. We'll get the bags into the truck, shoot up to the airport, go right onto the tarmac, and load everything onto the plane. When we get to our game location, everything is reversed; I'll also go to the rink, sharpen the skates, set the colors out for the morning skate, and take care of all the other details. It can be an 18-20 hour day when we're on the road.

Have you ever forgotten anything?
We bring everything, so not too much is ever forgotten. We even have little feet carpets with the Boston emblems on them, with one large mat for the center of the room as well, so the players feel like they're at their home dressing room. It just makes everything look more professional.

How many sets of skates does Bruins player Zdeno Chara go through in a season? That's a sore subject - 14 skates a year, and 16 pairs of gloves. He wants to change skates every 8-10 games. He's such a big guy, so he sweats a lot and plays 28-30 minutes a game, so the stuff breaks down because it's so wet all the time and never gets a chance to dry.

Do you play hockey yourself now? My brothers are always razzing me, they say, "Man, you've been an equipment manager for 25 years, and you don't even have a set of gear for yourself."