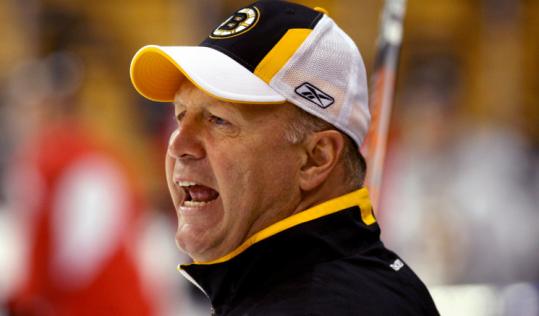 WILMINGTON - The Bruins are in Chicago tonight to play the Blackhawks, a speedy and exciting team with some of the NHL's top young offensive players. After the game, the Bruins dash home to take on their perpetual nemeses, the Montreal Canadiens, tomorrow night at TD Banknorth Garden.

"It's ironic that it's always them waiting for us at home," said coach Claude Julien, whose team lost a shootout in its first matchup with Montreal this season Oct. 15.

"So be it; we have to deal with what we can control. I think the best way to control that is to have all 19 guys going tomorrow, and being able to stretch your bench as much as you can and getting the results that you want, then trying to get home as quick as possible and getting a rest for the following night."

While the Bruins (8-3-3) are beginning to build buzz in Boston, winning six of their last seven games, Chicago is already ringing with full-throated cheers for the resurgent Blackhawks. Chicago, which hasn't been to the playoffs in six years, is 7-3-3 and has won four in a row. Since Joel Quenneville replaced Denis Savard behind the bench, the team is 5-1-2.

But it's the packed house that provides the biggest boost. The Blackhawks are 6-0-2 at home and boast the highest average attendance in the NHL, at 21,377 for seven games. A rocking United Center helps make every game fast-paced.

"It's going to be work for us to really eliminate turnovers in the neutral zone. That's something that I know I say a lot, but against this team, it's crucial; they'll thrive on those kinds of things.

"If we can get the puck in deep and try and stay in their end as much as we can and work that part of the game, it'll take away some of the momentum and hopefully take the crowd out.

The Bruins are building their success on a deeper pool of talent than they've had in the last few years, and their offense has been distributed across the team. Marc Savard leads the scoring with 6 goals and 16 points, and there are seven forwards with 9 or 8 points, as well as defenseman Dennis Wideman (4-4 -8).

This week will test the Bruins' confidence.

"We're coming to a really, really important time in the schedule," said Wideman. "If we play really well, we can move up. If we don't come to play, we'll find ourselves down a lot lower pretty quick.

"We've had a pretty good start to the year. It's later on when it gets really hard. Teams start seeing teams for a second time and then you actually see how good you are."

Defenseman Shane Hnidy, who has missed the last two games with a lower-body injury, returned to full practice. "I was in the gym for a while doing stuff there, and it helps, but it's a grind," Hnidy said. "So it's nice to be back on the ice with guys. I felt really good out there, so it was a really good first day." Hnidy will travel to Chicago but is not likely to be in the lineup. "Today was his first day skating," Julien said. "I don't think I'm going to dress him because, you know, it's been a while, but is he a possibility for Thursday? Yeah." . . . Patrick Kane, who leads the Blackhawks with 7 goals and 18 points, has a four-game point streak, including a 3-point effort in Chicago's last game, a 6-1 victory over Calgary Sunday. Kane, a week shy of his 20th birthday, told the Chicago Tribune he wasn't going to shave until the streak was stopped. That brought a chuckle from Bruins goalie Tim Thomas, who played with Kane in the World Championships. "I think that's a joke because I don't know if he really needs to shave," said Thomas.

'If we can get the puck in deep and try and stay in their end as much as we can and work that part of the game, it'll take away some of the momentum and hopefully take the crowd out. If we're sloppy, they'll eat us alive.'

claude julien on playing the blackhawks