Colborne grows on you

Bruins have big plans after sizing up their No. 1 choice 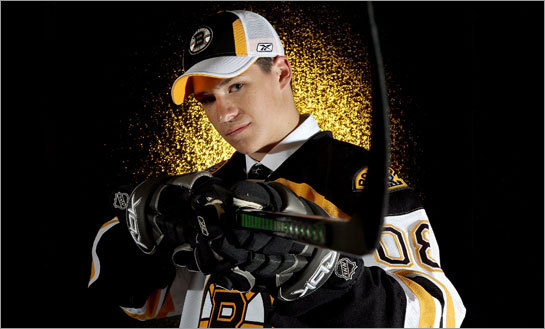 Joe Colborne is big - so big, in fact, that even he is having trouble keeping up with the measuring tape that runs up his backside. Just some six weeks ago in Toronto, the NHL Combine calculated the now-promising Bruins center at 6 feet 4 3/4 inches. On Tuesday, when he checked in for Boston's weeklong development camp in Wilmington, the long and lanky kid from Calgary, Alberta, topped out at 6-5 1/2.

"If I keep this up," said the amused Colborne, not sure whether to attribute the growth spurt to mathematical error, rarefied Boston air, or just good home cooking, "I'll be 7 feet tall by the end of the week."

Truth is, said Colborne, he thinks he's done growing. He's now 18, roughly 6-5, and really only in need of adding about 20-25 pounds to his frame of 190. That kind of mass and muscle ought to take him no more than a year or two to add, and he'll do that beefing up at the University of Denver, where he'll enter this fall as a wide-eyed freshman slotman on the perennial Division 1 powerhouse.

"I think you'll see him play pro at age 19 or 20," mused Boris Rybalka, his coach the last two years with Camrose in the Alberta Junior Hockey League. "He's kind of like Bambi right now, you know, still growing into his arms and legs. But when he's up around, say, 220, he'll be this unstoppable machine, and the guys he's out there playing against will be saying, 'Hey, where'd this guy come from?' "

Good question, in part because the AJHL, much like the British Columbia Junior Hockey League, remains a league with an asterisk invisibly attached to its masthead. Both leagues are considered Tier 2, or Junior A, just a cut below Canada's top (major) junior programs, the Western, Quebec, and Ontario leagues.

Just three years ago, Colborne was tooling around as a skilled but averaged-sized high school player in Calgary. He was only 5-9 and about 150 pounds. At age 15, just as a growth spurt was about to trigger, he enrolled at Notre Dame in Wilcox, Saskatchewan, the hockey factory that churned out the likes of ex-Bruins Gord Kluzak and Lyndon Byers. (For the record, the mention of both names drew only what could be described as a polite stare and apologetic shrug from Colborne.)

Colborne played well at Notre Dame, but didn't dazzle to the point where he drew serious interest from the WHL. He went undrafted by "The Dub," and was left with only a couple of training camp invites. Enter Rybalka, who had been charting Colborne's progress since before Notre Dame, and by the fall of 2006, Colborne was officially a Camrose Kodiak.

"He said he liked my work ethic," recalled Colborne, who flourished in his two years at Camrose, and this past season was Canada's Tier 2 Player of the Year, connecting for 33 goals and 90 points. "And he told me if I was willing to put in the time, he'd help me get to the next level. I wouldn't say he took a risk with me . . . I think commitment is a better word. Everyone else was telling me, 'Oh, come to camp and we'll see what happens.' "

Now the Bruins have what Rybalka calls "a real gem." Projecting him as a possible elite scorer, and a commanding presence in the middle, the Bruins made Colborne the 16th pick in last month's amateur draft in Ottawa. True, he didn't have the major juniot pedigree that typically comes attached to a first-round pick, but according to Scott Bradley, the club's director of amateur scouting, the Bruins were more concerned with the player than the embroidered dossier.

Bradley, who watched from the stands in Wilmington yesterday while Colborne skated with the rest of the eager kids, seriously began tracking Colborne early last season, and became increasingly interested with each look.

"He possesses a lot of the attributes we like - puck possession, a power-play guy, and probably can penalty-kill, too," said Bradley. "We didn't have to get over major junior vs. Tier 2 stuff, because the NCAA has been a viable route for a lot of NHL players, and this is a kid that's proven he's serious about making it, with his work ethic, and just things like leaving home at a young age [to go to Wilcox]."

Not afraid of hard work

When it started to become evident that his sprouting, determined son was serious about hockey as a career option, Paul Colborne took him out back to the shed. In this case, it was not the woodshed, but the tractor shed, a 2,000-square-foot structure with smooth concrete floor behind the family home at the outer edge of Calgary.

A multimillionaire from his success in building oil and gas companies, the elder Colborne converted the shed to a practice facility, one with a hockey net at one end for Joe, and a basketball net at the other end for daughters Lauren, Melissa, and Claire. Melissa, a standout for the Yale basketball team, will enter her junior season this fall in New Haven.

"I'm a believer in sports," said the 49-year-old Colborne, once a University of Calgary quarterback, and a self-taught hockey coach who helped craft his son's early playing career. "And I'm a believer in dedication and consistency to training. Joe has spent hours in that shed, shooting and shooting. And before we lived in that house, he would be in our basement, shooting for hours there, too. I get a laugh sometimes to hear people talk about his soft hands and how he's just a natural."

The reason for the laugh?

"I don't think any of that's true," Paul Colborne said. "It's all come from practice."

Rybalka has seen that work ethic firsthand for the last two years. During his stint with Camrose, said Rybalka, Colborne was always first to the rink for practice and first on the ice to work, often alone, on his stickhandling. He then would be last off the ice, and last to leave the weight room. According to the elder Colborne, his son began a serious weight training program five years ago, the same time he first hooked up with a personal trainer.

Last year, according to Rybalka, Colborne added a summer's worth of boxing lessons to his get-ready-for-the-NHL regimen.

"You never want your best players out there fighting all the time, obviously," noted the 41-year-old Rybalka, who is also the general manager in Camrose. "But every player has to be able to defend himself, too. People might be shocked to see that he can throw 'em pretty good out there. He fought once for us, and you know, it wasn't his fight . . . somebody went after one of his teammates and Joe shot out there like a lightning bolt. He knows if you're going to win, it's got to be a unified team thing."

For a couple of years now, Colborne has carried the moniker "Jumbo Joe," a tag applied by an Alberta sportswriter who made the obvious comparision between the kid and Joe Thornton, the towering ex-Bruin. Colborne admires Thornton's game, but tries to envision an NHL career in which he plays more like fellow big boys Vincent Lecavalier and Jason Spezza.

"My Joe's a little more of a scorer," said Paul Colborne. "I mean, God bless, I think Joe Thornton is one of the NHL's great players. But Joe [Colborne] is a really good passer, and he'll shoot and get to the net. He likes to think of himself more the Lecavalier kind of scorer and set-up guy."

"He'll be the first guy to pucks in the corner," added Rybalka. "He'll get in and out of the corners with the puck. And with that long reach and drive of his, he's able to thread pucks through legs and sticks at full stride."

Yesterday, in the embracing chill of Ristuccia Arena, Colborne took his first steps in the Hub of Hockey. An anonymous No. 47 on his back, he zipped around the ice as one of the baby-faced Black-and-Gold dreamers. He will be here for the week (camp wraps up Saturday), then head home to prepare for the college season.

Cam Neely, the club's vice president of passion, was among the front-office cognoscenti in the stands. Asked about the new top pick, the Hall of Fame right winger offered that though Colborne looked "pretty raw, obviously," his "hockey sense was noticeable." The same was true, said Neely, of Mikko Lehtonen and Blake Wheeler.

Coach Claude Julien said he was impressed by Colborne's size, sense, and hands.

"You can see all of that in him," said Julien, "and I think going to college will serve him well."

For now, there is no telling how soon Colborne will return, or where all the projections and promise will lead.

The last Jumbo Joe to come here left town with his potential largely unfulfilled, the hopes and wishes of a fan base and franchise crestfallen. But that Jumbo Joe was a No. 1 pick (1997), a burgeoning national hero, hyped to the hilt as an Eric Lindros-Mike Modano hybrid. Could it get any better? No. And it didn't.

This Jumbo Joe comes our way tucked in the thick of the draft's first round, with a load of schoolbooks and Mapquest directions to Denver tucked snuggly under one arm. Same sort of body, but a vastly different body of work. In a year, maybe two, we will begin to learn where it all will lead.

"For me, it's always been about hockey," said Colborne. "The way I'm looking at Denver now, if things work out well, I won't be there for four years. But we'll assess after each year, decide from there."

Sounds like a plan . . . and with plenty of room to grow.