THIS STORY HAS BEEN FORMATTED FOR EASY PRINTING
Panthers 1, Bruins 0

They salvage point in an overtime loss 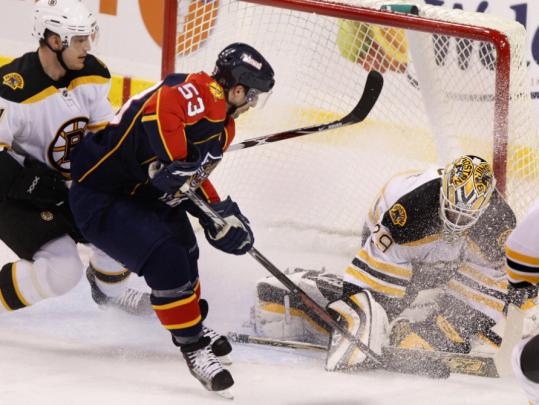 One night after nothing went right for the Bruins, they returned to Causeway Street and played a bit better. They were much tighter on defense, smarter with the puck in all three zones, and, all in all, played considerably more like a team with a reasonable shot at making the playoffs.

But for all their improvement, they were also losers.

Nathan Horton, with help from Stephen Weiss and Magnus Johannson, raced down the left wing and nailed in the only goal of the night, a wrist shot with 22 seconds gone in overtime, to hand the Florida Panthers a 1-0 win over the Bruins in front of 14,473 at the Garden.

"We're a good team, but we're not that good," lamented coach Claude Julien, displeased with a general malaise in his club's game of late. "We know our hockey club, and we know to win that we have to be a committed and determined team. We aren't finishing our checks, and we haven't been committed in front of the [offensive] net."

Johansson triggered the winning drive, gaining possession deep in his own end and quickly pivoting the transition game, headmanning the puck to Weiss for a rush up into the neutral zone. Weiss, spotting the breaking Horton, dished to his left, sending Horton streaking toward the left circle. As he closed toward the net, taking aim on goalie Alex Auld, he had defenseman Mark Stuart as the only Bruin to beat.

"I was right in front of him," said Stuart, who tried to straighten up and deflect Horton's quick snap. "He shot it, and I thought for sure that I blocked it."

Stuart blocked it, but not all of it, the puck ricocheting off his left knee just enough for Auld not to be able to track it. It ended up beating Auld on the short side, and handed the Bruins their second loss in as many nights, following a 10-2 shellacking in Washington.

Auld finished with 31 saves while Craig Anderson, the distant backup to Florida's top tender, Tomas Vokoun, turned back 40 for his second shutout in as many starts.

"He said it just sort of grazed his knee, and it hopped," said Auld, referring to Stuart. "I mean, it's tough, I don't know what to say, but we have to keep getting points, and we got 1 tonight - and that's better than nothing."

The night was in sharp contrast to the eight-goal pasting the Bruins took the night before in D.C., where the Capitals needed less than 20 minutes to pile up a 6-0 lead and wipe away Boston's six-game winning streak.

"It's important to regroup," said Auld. "You get judged on that a lot in this game, and we made steps tonight, but we need more."

After getting a refreshing night's sleep at a nearby hotel, the Bruins were tighter all around on defense, but they were also tight with their shooting game. Through 40 mintues, the sides remained scoreless, with the Bruins holding a slight (27-23) shot lead. They also too often turned the puck over in their own end and neutral zone, and would have been burned a few times if not for Auld's sharp work.

Olli Jokinen led the Florida attack in the first 40 minutes, hammering a half-dozen shots on Auld, while no fewer than seven Bruins had three shots apiece on Anderson.

The Bruins were without Aaron Ward, one of their top four defensemen, who sustained a deep contusion in his right foot against the Capitals. With Ward on crutches, Julien summoned Bobby Allen off the inactive list, and the ex-BC Eagle was rotated in sparingly - a total of 1:46 in the first period and two more shifts in the second to boost his meager total to 3:27 through the first 40 minutes.

The Bruins held a 40-31 advantage across the first three periods.

Some of the stats may look good, said Julien, but the digits can be deceptive. At some point, after winning six games, and positioning themselves well in the tight Eastern pack of playoff contenders, they lost their edge.

"I don't think there is any reason to panic," said the concerned coach. "But we have to get back to our good habits, and get them back as soon as possible. It wasn't disastrous on our part, but it's the time of year now when little things matter."