THIS STORY HAS BEEN FORMATTED FOR EASY PRINTING
Hurricanes 1, Bruins 0

One and done: Punchless Bruins stall 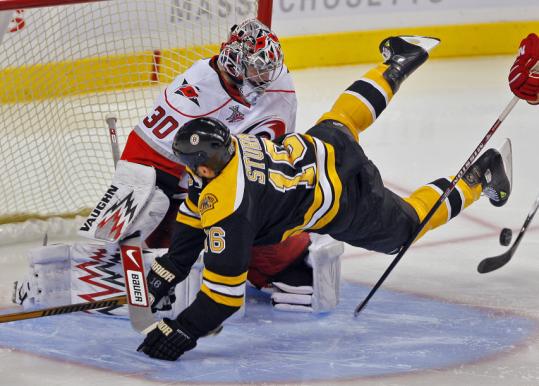 Aside from stretches in the first period and approximately 90 seconds in the third, the Bruins floated through last night's showdown against Carolina - a battered club without forwards Justin Williams (knee), Ray Whitney (flu-like symptoms), and Matt Cullen (head), and defensemen Bret Hedican (knee) and Glen Wesley (flu-like symptoms) - in hopes of winning their fourth in a row.

"When you don't work, you don't win," coach Claude Julien said after a 1-0 loss before 14,549 at TD Banknorth Garden, a setback that busted the Bruins' winning streak at three. "This team has not been capable of working for 60 minutes for a while now. That's something that's been addressed in the dressing room. Until we manage to do that, we're going to have our ups and downs."

In the second period, Carolina backed Boston into a corner, outshooting the Bruins by a 17-6 count and putting one of those shots past Tim Thomas.

The Hurricanes breezed through most of the third period, hardly breaking a sweat until late when the Bruins decided to shake their stupor, pound shots through traffic, and enter the danger zones they had no interest in breaching earlier.

Glen Metropolit and Petteri Nokelainen, the team's third- and fourth-line centers during the winning streak, were among the most aggressive Bruins late in the game, barreling into defenders and doing whatever they could to score the tying strike.

"In the second period, we just stopped playing," said David Krejci. "We tried to come back in the third period. It was too late."

Approximately halfway through the third, Julien shifted his centers in hopes of generating some offense and sending a message. Metropolit was promoted to the No. 1 line with P.J. Axelsson and Phil Kessel. Marc Savard was dropped to the second line with Marco Sturm and Chuck Kobasew, while Krejci moved down to center Milan Lucic and Peter Schaefer on the No. 3 trio.

"Metropolit is a good player," said Julien. "But when he's your best forward, that means there are a lot of guys not playing at their potential."

Julien saw the trouble signs earlier. He noted that, yes, Saturday's 4-3 victory over New Jersey was just that - a 2-point win. But in the third period, when Boston was outshot, 20-1, the hustling Devils rolled over the Bruins, who didn't respond to New Jersey's attack.

"Just because you win and say, 'Well, it's OK,' it's not OK. Because eventually it catches up," said Julien. "Tonight, it caught up to us in the second period."

Carolina's second-period assault started when No. 1 center Eric Staal winged a wrister off the crossbar. It continued when waiver-wire pickup Sergei Samsonov dangled around Andrew Ference and snapped a short-range shot that Thomas tipped with his glove.

Later in the period, Thomas came under fire during a sequence that started with forward Jeff Hamilton's off-speed shot from the right wing that the goalie punched into the far corner. Forward Craig Adams found the rebound and fired a shot that ticked off Thomas's glove. Hamilton swooped in for the rebound, but Thomas (16 second-period saves, 27 total) covered his backhand attempt at 8:07.

"He made big saves for us," said Savard. "That's what goalies do."

But Thomas cracked at 18:20 when Staal scored the lone goal. After some strong cycling in the Boston zone, the Hurricanes kicked off the scoring sequence when Wallin fed Staal the puck along the wall. Staal emerged from the corner, spotted some space under Thomas's right arm, and threaded the puck through the hole with 1:40 remaining in the period.

And until the waning minutes, the Bruins didn't do anything to wipe out Carolina's lead.

"It's pretty tough sometimes to make guys accountable when we were all pretty bad tonight," said Julien when asked about the third-period line juggling. "There weren't many players that could walk out of the dressing room tonight with their heads up."