Fernandez to take weekend off 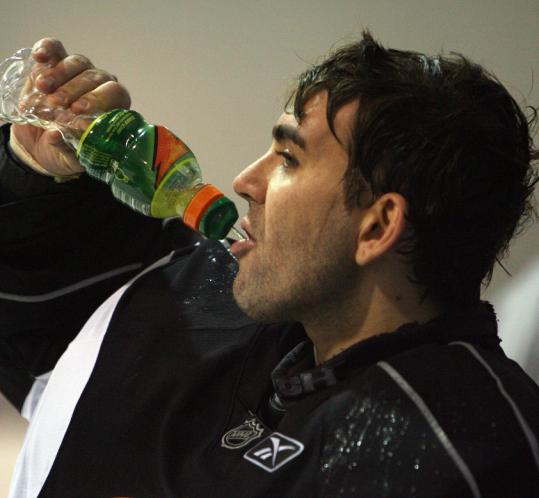 Upon the news that his offseason netminding acquisition will most likely be shelved through this weekend because of back spasms, general manager Peter Chiarelli preferred to dwell on the positive.

"At least it's not the knee," said Chiarelli during yesterday's practice at TD Banknorth Garden.

Optimism has been spare regarding Manny Fernandez's three months plus as Bruins property since Chiarelli obtained the netminder from Minnesota for forward Petr Kalus and a 2009 fourth-round pick July 1.

The 33-year-old Fernandez was projected to at least split the workload with Tim Thomas this season. But because of his troublesome left knee, which he originally sprained against Dallas Jan. 20, then reinjured two more times while in a Wild uniform, Fernandez has turned into a $4.33 million millstone whose return to game shape is unknown.

Fernandez (2-2-0, 3.93 goals-against average, .832 save percentage) hasn't played in over a month, with his last start coming Oct. 22 in a 6-1 wipeout against Montreal. And although he tweaked his knee during practice Oct. 30 after stepping on a puck, the discomfort that Fernandez still feels leads to speculation that the Bruins might have taken on damaged goods when Wild GM Doug Risebrough shipped him to Boston.

"He was cleared to play by our doctors twice," said Chiarelli. "Once prior to the deal and prior to training camp."

Before Fernandez's most recent setback (he first experienced back spasms during a solo workout Tuesday, then had to leave practice early Wednesday), Chiarelli had noticed improvement in the goalie's game.

"He tells me it's better," said Chiarelli of Fernandez's knee. "From what I saw the week before, he was quite good, in fact. He just needs peace of mind to know exactly what it is. He knows that now. When he's on, he can be an elite goalie. We're trying to get him back to that level."

Fernandez's unavailability has created an unexpected trickle-down effect. Chiarelli's game plan was to develop rookie Tuukka Rask in Providence this season under the tutelage of P-Bruins coach Scott Gordon, a former NHL goalie.

But because of Fernandez's knee, Rask has served as Thomas's backup for five games, then made his first career start Tuesday, stopping 30 shots in Boston's 4-2 victory over Toronto.

Rask looked sharp against the Maple Leafs, but two days earlier he struggled in a 17-save, 3-2 loss to Springfield while playing for Providence. If Fernandez remains on the sideline for an extended period, Chiarelli made it sound like he would rather acquire a proven No. 2 goalie instead of tabbing Rask for heavy-duty big-league service time this season.

"It would be unfair to have him play 10-15 games here," Chiarelli said. "It's just not good for his development. I know he feels that he's ready, but he also understands our plan."

The Bruins are still sticking to the prognosis that he will miss 2-4 weeks because of the injury.

The defenseman has been sidelined for six games this year (two because of the knee and four with an upper core injury). Before the injuries, Ference had been enjoying a solid season. He had notched three assists in 13 games, logged only four penalty minutes, and averaged 23:20 of ice time per outing, second behind Zdeno Chara.

The Bruins are 2-2-2 in games without Ference. They were also without Patrice Bergeron in all six games.

"We realize we lost one of our top forwards. And we've lost a defenseman that easily fits into our top four, or maybe even better," said coach Claude Julien. "We've had our challenges, but I think our team has responded well. Guys have stepped in and been given more responsibility. It's not just one guy that has to step up. It takes the whole corps. And I think our defensive corps has done a great job."

Ference had been skating mostly with Andrew Alberts during even-strength play. Alberts is now paired with Dennis Wideman, who looks to jump up into the play more regularly than Ference. "I always knew where he was at and what he was going to do," Alberts said of Ference. "Wides can make plays and beat guys one-on-one. It takes a little time to get used to and I hang back a little more as a safety belt. But he makes things happen."

Thomas, spelled by Rask Tuesday after having started the 10 previous games, will return to the pipes today. Thomas said he was able to enjoy the mental and physical rest. Thomas's last start came last Saturday in Boston's 7-4 stinker against Montreal. "Goaltenders are out there for 60 minutes," said Julien. "It's not like a player who can come to the bench and sit down. He can let his guard down and catch a second wind. Goaltenders have to be focused for 60 minutes and possibly more, game after game. A lot of it is a mental break. You hope that the whole week will pay off." . . . Matt Hunwick was recalled from Providence yesterday. Hunwick was a healthy scratch against Toronto. During practice yesterday, Hunwick and Alberts manned the points on the No. 2 power-play unit, with Phil Kessel, Chuck Kobasew, and Peter Schaefer up front . . . Glen Metropolit centered the No. 2 line yesterday, skating between Kobasew and Marco Sturm . . . Stick salute to hobbled enforcer Shawn Thornton (broken left foot), who hosted some of the single Bruins, including the recent Providence call-ups, at his downtown home along with his wife, Erin, for Thanksgiving dinner. "Had to do that a few years ago," said Thornton of spending Thanksgiving in a hotel room. "So I said, 'I'm never going to let that happen to other guys.' " One of hockey's general rules is that the tough guys often have the biggest hearts.

Fluto Shinzawa can be reached at FShinzawa@globe.com.