THIS STORY HAS BEEN FORMATTED FOR EASY PRINTING
Senators 2, Bruins 1

They lose lead, then shootout 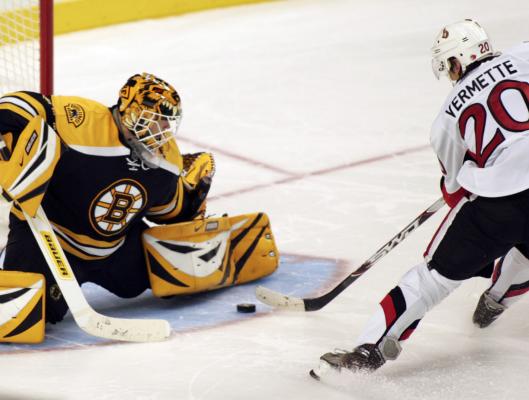 The replay and the scoresheet from last night's 2-1 setback to the Senators will show that the Bruins lost the game in the shootout, when Ottawa sharpshooters Daniel Alfredsson and Antoine Vermette beat Tim Thomas and Martin Gerber saved shots by Chuck Kobasew and Phil Kessel.

But the game was lost in the third period in a situation during which such swings never should take place.

Leading the Eastern Conference-best Senators by a 1-0 score, the Bruins went on their second power play when first-year forward Nick Foligno was sent off for interference at 3:33.

Twenty-eight seconds later, Thomas found himself swiping a puck out of his net.

It wasn't how coach Claude Julien and assistant Geoff Ward, who oversees the club's power play, would have drawn it up. A sloppy dump-in gave the Senators the puck. A pass along the wall got behind the Boston forwards and sprung the Senators loose for a three-on-two rush. And a decision by Zdeno Chara to pressure penalty-killer Chris Kelly against the boards gave defenseman Anton Volchenkov, the high man joining the play, a clear shooting lane on Thomas.

"That goal was a poor dump, three guys get beat with a rim, and they get off to a three-on-two," Julien said. "Certainly not something we teach them. I can tell you that."

With Vermette creating a screen in front, Volchenkov winged a shot that deflected off the left post.

"I thought he was going to tip it," Thomas said. "Then I heard it hit the post. But I never did find it again."

The next time Thomas spotted the puck, it was behind him. It had angled off the post and toward the slot where Vermette was stationed, and all it took was an easy backhand flick for the center to tie the game at 4:01.

It was the second shorthanded goal the Bruins had allowed in four games. Philadelphia forward Mike Richards slipped behind Chara to net a shortie that erased a 1-0 Boston lead Oct. 27. The Flyers went on to win, 2-1.

"We gave up that shorthanded goal again," said Julien. "It was a backbreaker."

Vermette's four-on-five goal was also the third bona fide scoring chance the Bruins had allowed on the power play in the last four games. Last Thursday, forward Jason Pominville - also with Chara manning the point - broke loose for a shorthanded bid that Thomas turned aside.

"We have to look at not necessarily making personnel changes, but we have to make changes in certain areas," said Julien.

Vermette's strike wiped out a lead Kobasew had given his club in the first period, when he netted his third goal in the last two games. Kobasew started the play by rushing the puck into the Ottawa zone. The puck landed on the stick of Kessel, who curled out of the left corner and spotted an unmarked Kobasew in the slot. Kobasew controlled Kessel's feed and winged a shot under Gerber's right arm at 4:13 for his team-leading sixth goal.

The Bruins controlled the play in the first period, limiting Ottawa to seven shots. But the Bruins became unsettled in the second, taking three penalties in the first 5:05 (Kessel for holding the stick, Chara for hooking, Aaron Ward for delay of game).

But while the Senators couldn't convert their second-period power plays, they gave Ottawa the momentum. They sent 16 shots on Thomas in the second period while holding the Bruins to four on Gerber.

Then came the ugly shorthanded goal. And then came the shootout, with Alfredsson beating Thomas with a forehand and Vermette tucking a close-quarters backhander between the netminder's pads. On the other end, Gerber foiled Kobasew and Kessel to close out the shootout.

"It would have been nice to do a little more in this back-to-back against Ottawa," Julien said.

"[Saturday], even though we really got outplayed, with six minutes left, we were still in position to pull out at least a point. We have to realize the importance of those situations. You're allowed to get points out of games you don't deserve."

One point was all Julien and his team could scrape together last night.