THIS STORY HAS BEEN FORMATTED FOR EASY PRINTING
NHL Playoff Roundup 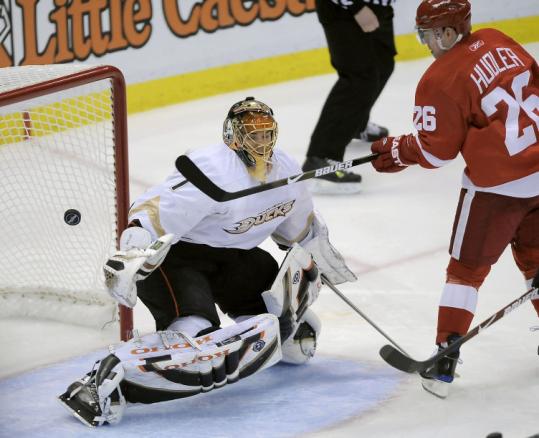 Johan Franzen usually blends in behind the Detroit Red Wings' other stars.

Unless it's the playoffs.

Franzen led the way as he did during the playoffs last year. He has 20 goals since the start of last year's title run, a 25-game postseason span.

The Swede acknowledged being amazed by his scoring tear. "Maybe I'm a little bit surprised," he said.

Game 6 will be tomorrow night at Anaheim.

Franzen scored the first goal at 3:23 of the second period. He skated up the right boards, swooped into the circle, and flicked a wrist shot high on Jonas Hiller after many of Detroit's first 16 shots were low.

"We're giving him a lot of shots every night, so maybe we're wearing him out a little bit," Franzen said. "I think it's more that we know where to shoot on him."

With Chicago on a power play and the puck on Patrick Kane's stick, David Bolland found a soft spot behind the defense and trusted the puck was coming. The hardest part was waiting.

When the puck finally arrived, Bolland patiently gathered it and then snapped a shot past the stick of a diving Roberto Luongo and into an empty net. The goal with 5:05 left gave the Blackhawks the lead they turned into a 4-2 victory in Vancouver Saturday night.

With the victory, the Blackhawks took a 3-2 lead in their Western Conference semifinal series. Game 6 is tonight in Chicago.

Chicago defenseman Brian Campbell set up a pair of goals by Dustin Byfuglien, including the tying tally during a power play in the second period.