THIS STORY HAS BEEN FORMATTED FOR EASY PRINTING
On hockey

On the Wings, and a prayer 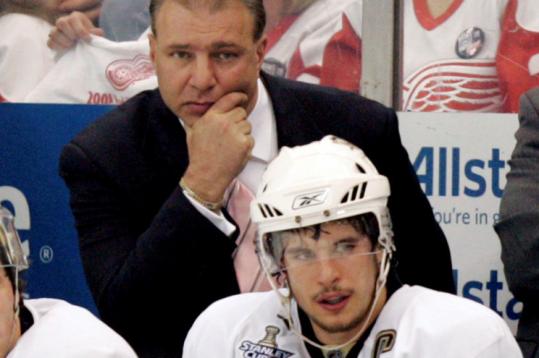 PITTSBURGH - Not to sound presumptuous, but are you picking Nicklas Lidstrom or Henrik Zetterberg to be in the lead float (or a freshly-made UAW convertible) for this week's Stanley Cup parade in Detroit?

If you think you missed the decisive game of the Cup finals, relax, because the Red Wings and Penguins play tonight, in what has turned into the Clinton-Obama matchup of puck primaries. If the Stanley Cup turned on superdelegates, then right now Wings coach Mike Babcock would be the guy parked at the bar, surrounded by adoring delegates, every one winking and elbowing each other, tucking stogies in Babcock's hand, their inflated chests stretching wide that Red Wing logo across the front of their souvenir sweaters.

Detroit, after Saturday night's 2-1 win here, holds a 3-1 lead in what has turned into a best-of-seven beatdown of a series for the Penguins. Pittsburgh's game has lacked imagination and creativity, which could be a product of coaching and/or inexperience, or simply a lack of talent. Whatever the reason(s) - including the likes of their "Lost" co-star Evgeni Malkin - the Penguins have been outplayed, outclassed, and profoundly outscored nearly every minute of the series.

Pittsburgh's best stretch came over roughly 20 minutes in Game 3, beginning late in the first period, during which Sidney Crosby banged in a couple of goals that helped pace a 3-2 win. But other than that, the Winged Wheels, even with Tomas Holmstrom (leg injury) sidelined in Game 4, have been airtight on defense and at times mesmerizing and magical when in possession of the puck.

"If you look at the last couple of games, they haven't really got that much, as far as scoring chances," said an optimistic Crosby, an ever-upbeat captain. "And we've done a pretty good job of really limiting them. They've got a lot of shots, but especially last game, there [weren't] as many quality ones as maybe in the past three games. So we've done a pretty good job of limiting their chances. And we've created our own."

That's the admirable, and understandable, talk of the man who wears the "C." Kudos to Crosby for maintaining a brave front amid the Steel City meltdown. But through four games, the Red Wings have a lopsided 11-4 scoring advantage, and have outshot the Penguins, 134-88. Sometimes statistics don't offer a fair portrayal of how a series has gone, but in the 2008 Cup finals, the numbers are as accurate and hard on the eyes as those we see at the gas pump these days.

Lead time also adds to the story. Through four games, Detroit has led for 97 minutes 38 seconds, compared with Pittsburgh's 47:50. True enough, the Penguins made it tighter in their building, but they're back in the Joe tonight, where they failed to score in Games 1 and 2 and trailed for 80:04 of the 120 minutes.

"I've been in exactly this situation in the Stanley Cup finals," said Babcock, whose Anaheim Mighty Ducks took the Devils to Game 7 of the 2003 finals before losing. "Won 15 games and you think that everything's going to go your way . . . and last time I got to watch someone else lift the Cup."

But these Wings aren't those Ducks, and these Penguins, though skilled and enthusiastic, don't have the postseason presence and seasoning the Devils had in 2003 - back when Scott Stevens still fronted Martin Brodeur.

Does Babcock have anything to worry about? Of course, because it's still hockey, and because goaltending can be such a decisive factor it isn't always the case that the best team wins (just ask the '71 Bruins about the influence of some upstart Cornell kid in the Montreal net).

The delightful truth about a 3-1 series lead in hockey, though, is that it nearly always allows the better team to prevail, immediately or eventually. Yes, the Penguins have a chance to delay their execution tonight because goalie Marc-Andre Fleury could seal the net, allowing Pittsburgh to chisel out, say, a 1-0 or 2-1 win. And, sure, he could do that for a second or third time, too, but from what we've seen of him in the series, that's just not going to happen.

Fleury, like the team he backs, just isn't quite there yet in his final-round maturation. Exhibit A: Detroit's winning goal in Game 4 by Jiri Hudler. Not only did the Penguins lapse in their defensive-zone coverage, leaving the fourth-line Hudler wide open, but Fleury should have been able to handle, with ease, the quick backhander Hudler zipped his way. A backhander on the short side is one awful way to lose a pivotal playoff game. Buckneresque.

"Their second goal, it was a break," said Penguins coach Michel Therrien. "It's a broken play, but good teams find ways to win. And you have to give credit to the Red Wings."

The credit will be the Cup, probably sooner than later.