THIS STORY HAS BEEN FORMATTED FOR EASY PRINTING
Golf Roundup 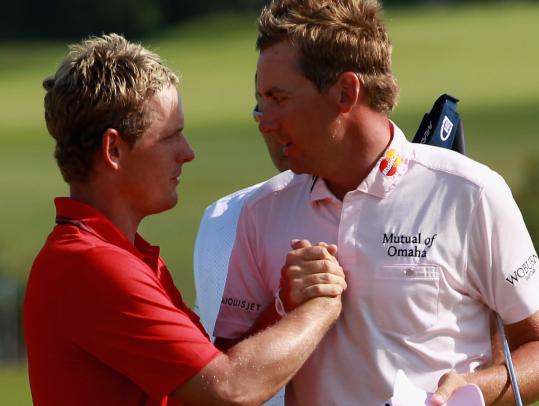 Ian Poulter denied Luke Donald the top spot in the world rankings yesterday, beating his fellow Englishman, 2 and 1, in the final of the World Match Play Championship in Casares, Spain, to claim his first title of 2011.

The second-ranked Donald could have risen to No. 1 for the first time, supplanting compatriot Lee Westwood if he’d won.

Poulter, who ousted Westwood in the Round of 16, was 1 down to his Ryder Cup teammate on three occasions in an error-strewn match, but a 45-foot putt won the 12th hole and birdies on the 14th and 16th sealed Donald’s fate.

“I didn’t play my best, but I played the right shots at the right times,’’ said Poulter, whose 14th career title will lift him from No. 22 to inside the top 15 when the new rankings are released today. “It’s a very special day.’’

Poulter picked up a check for $1.14 million and became the first player to win both match play titles, having won the tournament last year.

Like he did last month — when he lost a playoff to Brandt Snedeker at The Heritage in South Carolina — Donald missed an opportunity to climb to No. 1, acknowledging fatigue had caught up with him.

“I just ran out of steam a little bit,’’ said Donald, who made only one birdie against Poulter. “I really didn’t play well. I had some opportunities on the greens that I usually can do in my sleep.’’

Poulter, who beat Nicolas Colsaerts on the first playoff hole in the second semifinal, had been taken to at least 18 holes in his five previous matches.

Donald, on the other hand, had marched relentlessly to the final despite struggling with a throat infection, overwhelming third-ranked Martin Kaymer, 5 and 3, in the semifinals.

PGA — More than five years after he last won, a week after losing in a playoff, and a day after blowing a seven-stroke lead at Colonial to go into the final round trailing, David Toms shot a 3-under-par 67 to win at Fort Worth.

“This is actually happening, right?’’ Toms asked when he entered the interview room wearing the championship plaid jacket. “Wow, I didn’t know if this day would ever come again.’’

Toms regained the lead for good from Charlie Wi with an eagle with a wedge shot from 83 yards at the par-5 11th hole, and finished 15 under — a stroke ahead of Wi.

Toms’s elusive 13th career victory came a week after a playoff loss to K.J. Choi at The Players Championship, when he missed a short par putt on the extra hole for his sixth runner-up finish since last winning in January 2006 at the Open in Hawaii.

Wi started the final round with a one-shot lead that he quickly expanded with birdies on the first two holes. He finished with a 69 for his fourth career runner-up finish without a win.

Bo Van Pelt (65) finished third at 10 under. Defending champion Zach Johnson also shot a closing 65 to finish at 9 under in fourth place.

Leading, 1 up, and with Kerr facing a 10-foot birdie attempt on the par-5 18th, Pettersen curled in a left to-right 15-footer for birdie to seal the victory.

Pettersen, who beat top-seeded Na Yeon Choi, 4 and 2, in the semifinals yesterday morning, never trailed in winning for the first time since the Canadian Women’s Open in September 2009, and for the seventh time in her LPGA Tour career.

The fourth-seeded Kerr, who won the final two holes in beating Angela Stanford, 1 up, in the semis, had her putter to blame for failing to win for the 15th time on tour. The American missed four putts of less than 10 feet — all for hole victories.

Norfolk County Classic — Kevin Carey won for the third time, overcoming a four-shot deficit by shooting a final-round 68 at Presidents Golf Course in Quincy, good for a three-stroke victory.

Carey trailed Brendan Hester by three shots after the first round, and fell another shot back when he three-putted No. 1 for bogey. But the 56-year-old from Dennis Pines picked up seven shots on Hester over the next five holes, taking the lead for good with a 15-foot birdie putt on the par-5 fifth.

Handa Cup — Sherri Steinhauer remained unbeaten in this Solheim Cup-style event, beating Sally Little, 8 and 7, as the US team won seven of 12 singles matches at Wentworth by the Sea Country Club in Rye, N.H., and beat the International team, 34-14.

Michael Whitmer of the Globe staff contributed to this report.