Bulging disk could be cause of pain 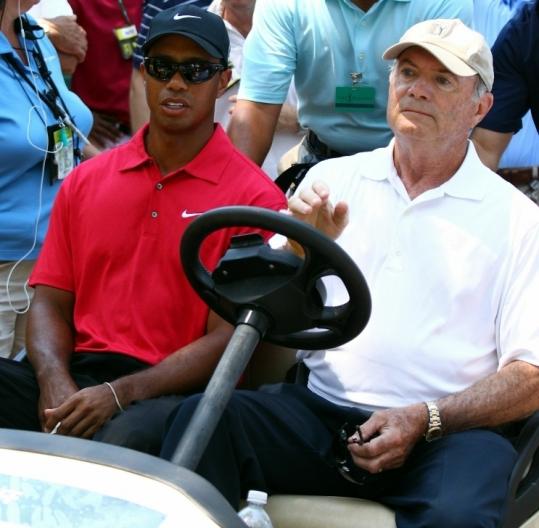 Tiger Woods got a ride to the clubhouse after withdrawing from the tournament while playing the seventh hole. (Richard Heathcote/Getty Images)
By Michael Whitmer Globe Staff / May 10, 2010

PONTE VEDRA BEACH, Fla. — Even when he’s 12 shots back, playing spotty golf with no chance of winning, Tiger Woods has a way of becoming one of the day’s biggest stories. Suddenly, someone with a past that’s been recently sullied finds his competitive future temporarily muddied.

Woods withdrew from The Players Championship yesterday with a neck injury, ending his day after hitting his second shot on the seventh hole.

Woods said he began feeling pain before the Masters, said he’s had a tingling sensation on his right side down to his fingers, and doesn’t know what caused it.

“Setting up over the ball is fine, but once I start making the motion, it’s downhill from there,’’ Woods said.

After hitting his drive well right of the seventh fairway, Woods was slightly slumped over on the tee box, in apparent discomfort. He asked for a PGA Tour official, put his arm around him, and said something. While the official talked on his cellphone, Woods walked to his drive, hit his second shot short of the green, grimaced again, and then walked into the fairway to shake hands with playing partner Jason Bohn and others, a clear sign he was withdrawing from the tournament.

Bohn, who was met by a throng of media after shooting an 80 (“Are you guys wondering how I made triple on 18?’’ he cracked), said Woods offered no indication that he was in pain before his decision to withdraw, but he noticed something upon being told the news.

“When I shook his hand he kind of flinched a little bit. He definitely looked like he was in a lot of pain,’’ said Bohn, who had three back surgeries in 2008 and missed five months. “I saw him on the first tee doing some warm-up exercises with his neck, but I don’t know his routine, if that’s part of his stretching or getting himself ready to go.’’

Woods wasn’t playing well: 2 over for his first six holes, which made him 2 under for the tournament. He had hit only one fairway, three-putted the par-3 third hole for bogey, and put his drive on the fifth hole into the water, which led to a second bogey.

“I think some of the shots that he hit were quite a bit farther off line than you would expect from the best player in the world,’’ said Bohn.

Woods occasionally has been asked about his physical condition since returning from a five-month break brought on by a sex scandal, and the only time he mentioned his neck was during his pretournament news conference at the Masters. Responding to a question about the Nov. 27 car crash that spawned the scandal, Woods said, “Yeah, I had a busted-up lip and a pretty sore neck.’’

Then again, this is the same person who wouldn’t admit to the severity of a knee injury while famously winning the US Open two years ago, and having surgery days later that sidelined him eight months. Woods also said in that pre-Masters news conference that he had multiple tears on his right Achilles’ last year, an injury that he never publicly had disclosed.

Woods did discuss neck injuries with at least one tour player.

“He and I were talking about my neck injury earlier in the week and that I needed to work out more,’’ said Davis Love, who has had lingering disk issues. “We were talking about working out some together, and he pulls out for the same thing that bothers me.’’

After being brought in from the course on a cart, Woods entered the tour’s physical therapy trailer, where he stayed nearly 30 minutes. Shirt untucked and sunglasses on upon emerging, Woods got into the passenger seat of a waiting SUV courtesy car and was driven away.

Woods hadn’t been sharp all week, hitting some wild, wayward drives and popping up a few others, all uncharacteristic of the world’s top-ranked player. In rather docile scoring conditions the first three days, he had rounds of 70-71-71, and started the final round in a tie for 45th.

It’s the first time he’s withdrawn during a round because of injury since the 1995 US Open at Shinnecock Hills, when he was a 19-year-old amateur and hurt his wrist while making a swing. He also withdrew from the 2006 Nissan Open before the third round because of flu-like symptoms.

But he’s played hurt before, and at a very high level. Woods won the 2008 US Open in a playoff against Rocco Mediate, limping throughout the week at Torrey Pines and doubling over in pain after numerous swings, using his club as a crutch. Days after the tournament, it was announced that Woods had competed on a leg that was terribly damaged: He had a torn anterior cruciate ligament and a stress fracture.

Now, five weeks before this year’s US Open at Pebble Beach — the same tournament and the same venue where he won by 15 shots in 2000 — Woods’s availability is anything but certain.