Tabloid tenacity was news to him 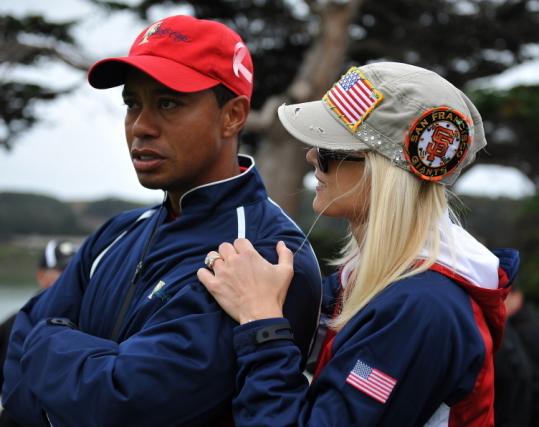 Somewhere down Tiger Woods’s swelling list of recent “transgressions’’ is a glaring miscalculation regarding the changing media landscape.

Team Tiger’s typically vague, thin-on-details approach to handling the news of his bizarre middle-of-the-night car accident - which came in the aftermath of a National Enquirer allegation that Woods, married and the father of two, had a longtime mistress - was an arrogant jab at the willing suspension of disbelief of anyone possessing a hint of logic or skepticism.

That wouldn’t have been damaging for Woods had it not also essentially offered an indirect challenge to the increasingly brazen tabloid media:

Heroically and with uncommon brute strength, my wife freed me from the car by smashing the back window with a golf club. No, she’s never heard of the Enquirer; she prefers Golf Digest or Swedish Nanny Monthly. That’s my story and I’m sticking to it. Catch me if you can. You won’t.

Yet they did, quickly and easily feeding a voyeur’s appetite for salacious details. The failure of Woods and his agents and image-shapers at International Management Group to recognize that going into lockdown mode after the crash was the wrong approach is fascinating. He had to know there were cocktail-dress-wearing skeletons in his closet willing to sell their stories if the public and the press didn’t buy his. He had to know they’d be unearthed for a fee eventually.

Or was he really that sheltered, that disconnected, that oblivious to this 24/7 media world of Twitter and camera phones and leaked-sex-tapes-as-a-career-move? Did he and IMG really expect the status quo to continue?

The tactic of stonewalling the conventional media, which fights daily to adhere to the blurring line between journalism and rumor-mongering, probably would have worked a dozen years ago, maybe even two years ago.

Perhaps it’s not entirely fair to suggest he should have known his personal life would be scrutinized to this degree, simply because it never has been since his fame exploded.

Considering that he is an honest-to-goodness global icon - which means that major developments in his personal life are news - Woods has managed to live a remarkably private existence since Charles P. Pierce’s infamous 1997 article in Esquire included the shocking - shocking! - revelation that he had the crude sense of humor of a 21-year-old frat boy. Which is exactly what he was, of course, albeit one with a flawless swing.

Having his humanity exposed was apparently bad for the bank account. After the Pierce article, Woods’s public persona was expertly manicured and seemingly bulletproof, cultivated and controlled by Woods and his faithful coterie of insulating handlers. Presenting him as an actual fallible person was not a consideration. He made a conscious choice to live by that old (and given his recent revelations, ironic) Andre Agassi slogan: Image is everything.

If not for those meddling kids at the National Enquirer, Us Weekly, and TMZ, he might have gotten away with it. Instead, they were fueled by a challenge that Woods didn’t even know he’d issued. These days, tabloids, gossip websites, and blogs can be relentless, thorough, and selectively ethical. They will gleefully expose faults and indiscretions a man may have forgotten he had.

That they have led the reporting charge on this story is confirmation that the culture has changed. No longer is their territory limited to Brangelina, Jon and Kate, and the Kardashians. Sports is now on their radar. When Angels pitcher Nick Adenhart was killed by a drunk driver in April, the story was not broken by ESPN or the Los Angeles Times. TMZ had the scoop, and had it right.

If certain superpowers in the mainstream media weren’t wholly complicit in protecting Woods’s image, then they certainly went above and beyond in respecting his wishes, fearing the fallout (specifically, a lack of access) should they cross him.

ESPN, which sometimes gives the impression that nothing is news until it informs us that it is, blatantly underplayed the story, right up until Wednesday morning, when Us Weekly posted the damning voice-mail allegedly provided by Jaimee Grubbs, a Los Angeles cocktail waitress who claims to have had a 31-month affair with Woods.

It was the smoking gun, and the story could no longer be brushed off. Not only did ESPN finally give it appropriate consideration, but so did some unlikely media outlets. Thursday morning, the Weather Channel had Mark Potter reporting live from somewhere in the vicinity of the Woods home. Presumably he was there to report on the current temperature of the marriage. Instead, Potter read from Woods’s day-old statement, the one posted on his personal website under the almost comical headline “Tiger Comments On Current Events,’’ as if he were finally going to give his take on the health care crisis.

His statement included the requisite apologies and scoldings (“I have been dismayed to realize the full extent of what tabloid scrutiny really means’’) as well as a plea for privacy. Which goes to show that after all that has happened this week, he’s still capable of wishful thinking.

While he will never again receive the privacy he desires, even with IMG providing cover, he will recover from this. In fact, redemption will come easily. Athletes of great accomplishment who were accused of greater misdeeds have climbed back to acclaim. Ray Lewis is a preening face of the NFL. Kobe Bryant had the best-selling jersey in the NBA in 2009. Brace yourself now: The next time Woods challenges for a green jacket, the schmaltz will be off the charts.

Of course there are second acts in American life, especially for the rich and famous. That’s another thing about the new media Woods will learn soon enough.

They’ll gladly profit from tearing your image down to nothing. But it sells just as well when you’re building it back up.

Listen up
In its battle with upstart challenger The Sports Hub, not only did WEEI hold its audience in the November ratings, but it improved in two crucial time slots in the most important demographics. In the morning (6-10), WEEI’s “Dennis and Callahan’’ show was first in the market in the coveted male 25-54 demo, up to an 8.3 from last month’s 7.7. And in afternoon drive (2-6), “The Big Show’’ was second only to classic rock station WZLX with an 8.2 among males 25-54. In the same demo, WEEI’s midday “Dale and Holley’’ program earned a 7.7 share, good for second, while “The Planet Mikey Show’’ was first in nighttime with an 8.7. Overall among men 25-54, WEEI (7.7 share) trailed only WZLX (8.1). Ratings for The Sports Hub, which since debuting Aug. 13 has established itself as a viable alternative to WEEI, dipped slightly in November, its third full month in the Arbitron books. Among men 25-54, it finished tied for fifth in the market with a 5.0 share, down from 5.9 in October, when it was third.