Woods is smiling all the way to the Bank 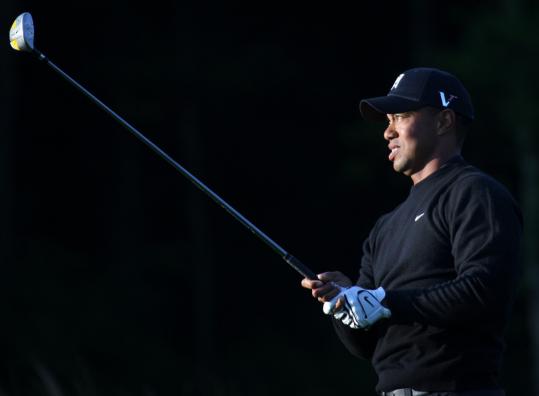 Tiger Woods is glad to be back at TPC Boston after missing last year because of knee surgery. (Bill Greene/Globe Staff)
By Michael Whitmer Globe Staff / September 4, 2009

NORTON - After his only practice round for the Championship, Tiger Woods said all the right things yesterday. He’s upbeat, confident, and happy to be back in Boston.

“I’ve always liked this area. I’ve played well here, and the people are thoroughly enthusiastic about sports,’’ Woods said. “You don’t find that everywhere you go. It’s just neat to come to an area like this where you can see it is truly a sports town.’’

Woods missed last year’s tournament, recovering from reconstructive knee surgery. But his record at TPC Boston, as it is at most places, is impressive. He won in 2006, tied for second in 2004 and 2007, and tied for seventh in 2003, the first year of the tournament. His range of scores (a low of 63, high of 73) has produced a stroke average of 68.15, so it’s a plot of land he’s pretty comfortable on.

“The greens are perfect. The fairways are in great shape,’’ said Woods, who was paired yesterday with, among others, Deutsche Bank CEO Seth Waugh. “Surprising how dry it is considering how much rain they’ve gotten here. The golf course is really draining well.’’

There’s been some attention on Woods’s putting this week, after his last two starts resulted in second-place finishes. Missed putts in the final round at the PGA Championship opened the door for Y.E. Yang’s historic win, and a 6-footer on the 18th hole at The Barclays last week would have forced a playoff with Heath Slocum. Quite telling, actually, that Woods is being scrutinized over a pair of runner-up finishes.

“I don’t think he made as many putts as he normally does, but the stroke looked fine,’’ said Steve Stricker, who was paired with Woods for the first two rounds of The Barclays. “I don’t see anything different. I guess we’re just shocked when he doesn’t make one because he’s made so many over his career. But it still looks good. He putts it pure. I mean, he’s the best, you know.’’

Said Woods, “I’ve worked on it just a little bit. Not much, though. This last stretch there, I think I’ve hit the ball pretty good. I’ve putted well in stretches. Win, win, second, second. That’s not too bad.’’

No, it’s not. For most everyone else, a four-tournament stretch like that brings parades and keys to the city. For Woods, it brings questions. His five victories this year lead the Tour, and he also leads the money list and the Cup points list.

This time last year, he was just getting off crutches, and yesterday he was asked if he could offer suggestions for another popular sports figure coming back from reconstructive knee surgery to repair a torn anterior cruciate ligament.

Tiger, any advice for Tom Brady?

“Well, you have to understand that you’ve done the legwork, you’ve busted your butt all these months to get to this position, which I know Tom has,’’ Woods said. “He’s worked extremely hard. He’s taken a few shots and, obviously, I think it’s good. He needs the experience.

Asked if he and Brady now share a special bond, Woods said, “Blowing out ACLs is definitely not a bond you want. But certainly, I’ve always admired him for what he’s done, even though that tuck rule got us.’’