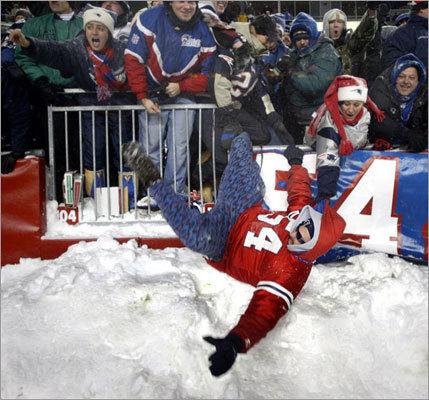 Fans were tumbling out of the stands and into the snowbanks alongside the field during this one, which was played at the end of a two-day snowstorm and was the first of three snow games the Patriots would play during the 2003 season. The Patriots defense shut down the Dolphins to lead New England as it clinched the AFC East title, and fans celebrated by tossing snow in the air caught the attention of the players.

“I give everybody credit and I am happy that we have the fans that we have,” linebacker Mike Vrabel said. “I know it was tough getting here. Guys had a tough time getting here. The way that they timed up the cheer, whoever came up with that, they did a great job and it was well executed.”