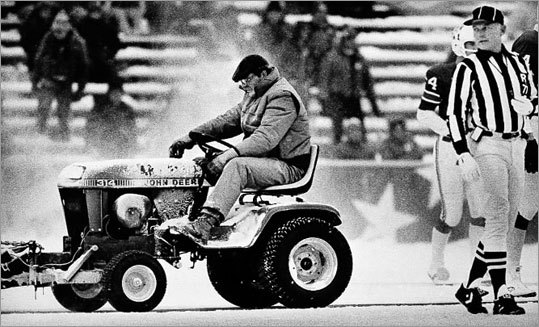 One of the most famous snow games featured convicted criminal Mark Henderson, on a work release program, driving a plow on the field to clear the way for John Smith's field goal, the only score in a game dubbed the "Snowplow Game." Patriots coach Ron Meyer ordered the path cleared, prompting Dolphins coach Don Shula to later call it the "most unfair act" ever. The league banned the use of snowplows after the season. Photos not available: The Patriots defeated the New Orleans Saints 7-0 in cold, snowy conditions on Dec. 4, 1983, and edged the Buffalo Bills 26-24 on Dec. 10, 1978, a day that featured both snow and sun.