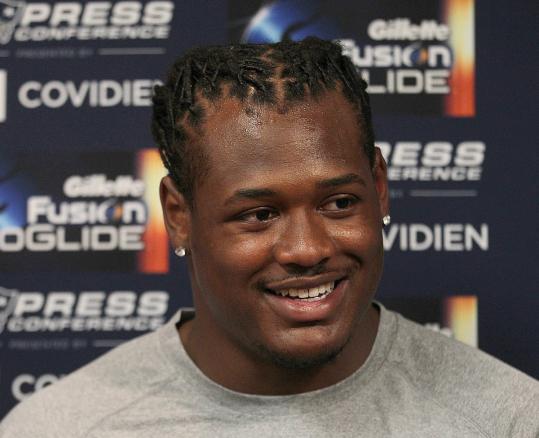 FOXBOROUGH - To hear Dont’a Hightower speak, it’s easy to see why he did so well playing for Nick Saban at Alabama, and why he’ll likely get along swimmingly with his new coach, Bill Belichick.

The versatile linebacker, the second of the Patriots’ two first-round picks in the draft, is all business when it comes to talking about football.

It wasn’t that he was gruff when he met with the media Friday before an on-field session at rookie minicamp, and he did crack a smile or two, but for the most part Hightower was matter-of-fact when talking about acclimating himself to the playbook, the coaching staff, and learning how to do whatever it takes to help the Patriots win.

In other words, he’s a Belichick kind of guy.

Hightower was happy to be back at Gillette Stadium without all of the pomp and attention that came with his first trip, the day after he and Chandler Jones were drafted 25th and 21st, respectively.

“That’s fine with me. I’d rather have it that way, I’d rather not have the spotlight on me, so I’m glad that’s over,’’ said Hightower. “That was fun and everything, but I’m ready to get down to business and get on the field and contribute to this team.’’

After serving as captain and relaying defensive signals for Alabama, Hightower is low man on the totem pole, but that’s fine with him.

“It’s a little easy right now,’’ he said of starting over. “A little calm before the storm. But I know what’s on my plate and what I have to do in order to be a part of this football club.’’

The Patriots’ seven draft picks, seven undrafted rookies, three tryout players, and a handful of second-year players, such as Markell Carter, Aaron Lavarias, and Mike Hartline, are taking part in minicamp, giving them ample opportunity for one-on-one time with the coaching staff.

“It helps a lot, being able to have the hands-on coaching that everybody wants,’’ said Hightower. “It feels good to have coaches eyeing you and making sure that you’re doing everything you need to do and be the best player you can be in this situation that you’re in.’’

After playing for Saban, who not only is a friend of Belichick’s but was his defensive coordinator in Cleveland 20 years ago, Hightower saw some similarities between the Patriots’ playbook and Alabama’s, but he isn’t banking on his past to get him through his current situation.

“Some of the terms are the same, but at the same time it’s going to be more about me getting in the playbook and learning the different terminology,’’ he said, adding that he will also look to older players for help.

On draft weekend, Hightower called Belichick and Saban two peas in a pod, and expounded on that Friday: “The one thing that really sticks out to me about those two guys is they’re very intelligent and they’re very good coaches. Wherever they’ve been, they’ve had a lot of success, so I feel real honored to be coached under Coach Belichick.’’

If Hightower’s transition from Alabama to the Patriots is as seamless as some believe it could be, he, Jerod Mayo, and Brandon Spikes will form an all-Southeastern Conference linebacking corps. The rookie said he watched Mayo at Tennessee and Spikes at Florida, and copped to taking some of their moves.

His braids pulled back tightly, Hightower showed inside the Dana-Farber Field House that he truly does mean business. When linebackers and defensive linemen lined up during Friday’s practice, he used his powerful legs to push a heavy blue blocking sled almost off the ground.

He may be all about the work, but Hightower did allow that the last two weeks, being drafted and starting his professional career, is the fruition of a long-held dream.

“It just means a lot to me to have my dreams come true, once being that little boy who wanted to play in the NFL, and now doing something that you love to do with so much passion,’’ he said. “It definitely means a lot to me and it’s definitely the No. 1 priority for me right now.’’