Follows deaths of other athletes with brain trauma 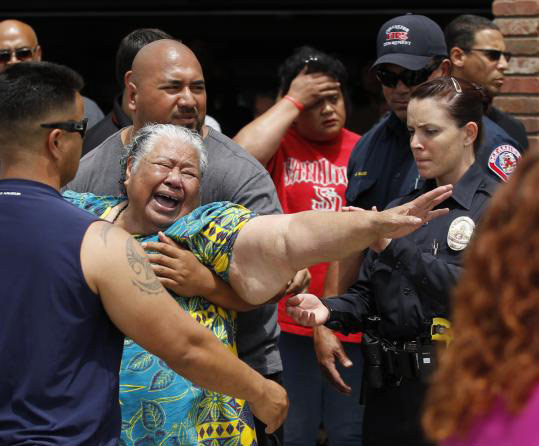 Luisa Seau, mother of Junior Seau, grieved in the driveway of her son's home Wednesday in Oceanside, Calif. (Getty Images)
By Greg A. Bedard Globe Staff / May 3, 2012
Text size – +

Junior Seau, one of the greatest linebackers in NFL history and an emotional leader on four Patriots teams, including the 2007 squad that went 16-0 in the regular season, was found shot to death at his home in Oceanside, Calif., on Wednesday in what police said was an apparent suicide.

Seau was 43 years old and less than three years removed from his final NFL game - at Gillette Stadium in the Patriots’ playoff loss to the Ravens on Jan. 10, 2010.

“All of us are deeply saddened about Junior Seau, a great player loved by teammates who also worked hard to serve his community,’’ said NFL commissioner Roger Goodell.

Seau’s post-career life previously came under some scrutiny in October 2010, when Seau’s car plunged 100 feet off a cliff in Carlsbad, Calif., shortly after he was released from jail following an arrest on a felony charge of spousal assault without injury. Seau said he fell asleep at the wheel. He sustained a concussion and some minor injuries.

Seau’s body was found Wednesday by his girlfriend in a bedroom with a gunshot wound to his chest, and a handgun was near his body, police said. Seau apparently did not leave a note.

Seau’s mother, Luisa Seau, sobbed as she talked to reporters outside her son’s home, where hundreds had arrived to mourn the loss of one of San Diego’s favored sons.

The NFL and its fans have become accustomed to dealing with the early deaths of its former heroes.

Former Falcons safety Ray Easterling, a plaintiff in a high-profile lawsuit against the NFL concerning concussion-related issues, died last month at the age of 62 from a self-inflicted gunshot wound.

In February 2011, former Bears star safety Dave Duerson, 50, committed suicide - a gunshot wound to the chest - and left a note asking that his brain be donated for the study of brain trauma in athletes. Recent research has focused on the long-term effects of concussions in sports.

Seau’s similar method of suicide has sparked speculation about brain preservation. Seau, a violent tackler and physical player, was never listed on an NFL injury report with a concussion, according to ESPN. But during the earlier years of his career, awareness of brain injury and concussion was far less than today. The NFL did not institute its first “return-to-play’’ guidelines until 2007.

Also, in 2006, former Eagles safety Andre Waters, 44, committed suicide with a gunshot wound to the head.

Seau played 20 years, tallied 1,524 tackles, 56 1/2 sacks, was a six-time first-team All-Pro selection and was named to the Pro Football Hall of Fame’s All-Decade Team of the 1990s. He is likely to be voted into the Pro Football Hall of Fame in 2015, his first year of eligibility. Off the field, the Junior Seau Foundation distributed over $4 million to youth organizations.

That he decided to end his life so soon after a standout career will have the NFL, from the top down, taking a deeper look into what is being done to help players in the transition from the field to regular life.

“I am pleading with all my brothers and NFL family,’’ Nolan Harrison, the senior director of former players for the players’ union, said in a statement. “If you need help, someone to talk to, if you know someone who does, please reach out!’’

Seau, a native of Oceanside, was drafted fifth overall by the hometown Chargers in 1990 after a standout career at Southern California. After being an alternate for the Pro Bowl as a rookie, Seau was voted to the next 12 all-star games.

“I can’t put into words how I’m feeling right now. I’m shocked and devastated,’’ said Chargers team president Dean Spanos. “He transcended the game. He wasn’t just a football player, he was so much more. This is just such a tragic loss. One of the worst things I could ever imagine.’’

In 2003, Seau was traded to the Dolphins. After starting 15 games in his first season, Seau retired after two injury-filled seasons with Miami. That lasted four days - until Patriots coach Bill Belichick called him while Seau was surfing.

Seau would go on to play just 38 regular-season games with the Patriots, but Seau’s emotional style and his love of all things football made it feel as if he had been a Patriot his entire career.

Despite breaking his arm late in the 2006 season, Seau re-signed with the team and was named a captain for 2007.

That team would enjoy the greatest regular season in NFL history - the only team to go 16-0 - before losing Super Bowl XLII to the Giants. Seau, who would play parts of the next two seasons in New England, never got that elusive Super Bowl ring.

Seau’s seemingly limitless energy and passion for the game, the humor he showed in the locker room and his preference for referring to everyone as “buddy’’ - mostly because he had a tough time with names (close friends were “buddy buddy’’) - endeared him to teammates at all three of his stops.

“Every day, Junior Seau greeted his teammates and coaches with an energetic ‘Hey, buddy!’ It was genuine, enthusiastic and backed by his radiant smile,’’ Kraft said in a statement. “For four seasons, after every game he played, he would always find me in the locker room just to give me a big hug and squeeze tighter than anyone I remember. It was one of the many things I enjoyed about him.

“He was passionate about football and always spoke with great conviction. He may have been one of the most charismatic Patriots players in franchise history. I loved listening to him when he addressed an audience. I will never forget presenting him with his AFC Championship ring at Seau’s Restaurant in San Diego before our game against the Chargers in 2008. It was a memorable moment shared by both Patriots and Chargers fans, who that day celebrated pregame together as Junior Seau fans. He was beloved in his hometown of San Diego and quickly became a fan favorite in New England. Today, the fans of the teams for which Junior played – San Diego, Miami and New England – lost more than a legendary football player. We lost our ‘Buddy.’ My thoughts and prayers are with his family and I extend my sincere condolences to his many friends and former teammates.’’

Patriots defensive captain Vince Wilfork said on Twitter, “[My wife] and I are heartbroken about Junior. He’s one of the greatest people I shared the field with.’ ’’

“One of the true warriors,’’ running back Kevin Faulk said. “I can honestly say it was an honor to be his teammate. Always ready to give everything he had.’’

“Junior was one of the most positive, uplifting people I have ever known,’’ said former Dolphins end Jason Taylor. “He was always full of life and energy and had an infectious spirit that lifted everyone around him . . . I’m going to miss you buddy.’’

Seau is survived by three teenage children: a daughter, Sydney, and sons Jake and Hunter.

“The only memory I have is being able to be part of something special. It was a special journey for all of us,’’ Seau, referencing the ’07 season, told the Globe in 2008. “I’m going to hold on to that forever. There are only a certain amount of days, a certain amount of moments in life, that you can cherish. Being part of the New England Patriots, in the two years I was there, especially last year 18-1, is something I can rest with.’’