THIS STORY HAS BEEN FORMATTED FOR EASY PRINTING
Combine notebook 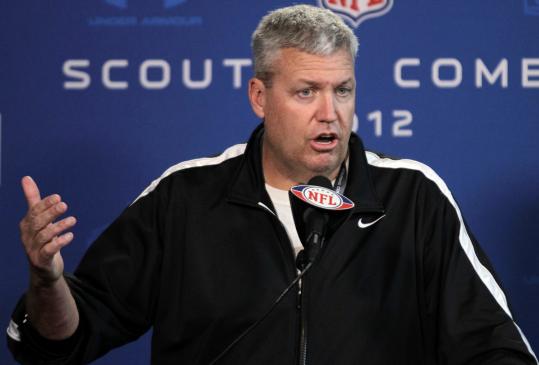 INDIANAPOLIS - A year after boasting of a Super Bowl championship in the 2011 season, Jets coach Rex Ryan had a decidedly different tone yesterday at the NFL Scouting Combine because he thinks his own words set up the Jets’ “terrible’’ season.

“The infamous Super Bowl guarantee was here,’’ Ryan said at Lucas Oil Stadium. “Looking back, obviously, it was a huge mistake to make that guarantee. At the time, we were coming off two [AFC] Championship games, I really thought it would be a thing that would actually motivate our team, you know to really talk about the Super Bowl, to focus on the Super Bowl. But, in hindsight, I think it put undue pressure on our team and we kind of lost focus, and really we lost focus on what we do best.

“It was obviously a big mistake. I think it contributed to the season we had. Obviously, we had a terrible season. I’ll take full responsibility for it. I think part of that guarantee really contributed to that.’’

The Jets slumped to 8-8 and finished behind the Patriots for the third straight year under Ryan.

“We always look at the moves of every team, especially New England,’’ Ryan said. “This is a team we have to beat, clearly. The three years I have been here, they have won our division all three years. That’s something we want to do, so there is a chess match going on. We always look at what they are doing, but the main thing is building our team.’’

Ryan said there will be “no promises’’ moving forward.

“I think you’re seeing a lot of sincerity in it,’’ said Jets general manager Mike Tannenbaum. “And the only thing you can take from 2011 is the lessons from it. And I think, with Rex, what you see is what you get. He’s a very genuine guy who wants to be very good at what he does. We’ve asked ourselves a lot of hard questions over the last couple weeks.’’

That could include Mark Sanchez’s future as the Jets’ quarterback. Both Ryan and Tannenbaum reiterated that Sanchez is their guy, although both said they would explore any opportunity to improve the team, regardless of position.

Might that include Peyton Manning, who is expected to be released by the Colts in the next week? “First off, Peyton is under contract with a different team, so I can’t talk about him specifically,’’ Ryan said. “But with our organization, we will look at everyone.’’

New Buccaneers coach Greg Schiano, who coached Patriots cornerback Devin McCourty at Rutgers, is very confident that his former pupil will regain the form that sent him to the Pro Bowl as a rookie.

“He’ll be back. There is no doubt about it,’’ Schiano said. “I didn’t really know he was having a rough patch. I know he got [injured] a little bit. He’s been fortunate that hasn’t happened to him very much in his career. I know that’s one thing, if he didn’t play at the level he did before, that probably had something to do with it.’’

Schiano has close ties with Patriots coach Bill Belichick. Schiano received advice from Belichick when he left Rutgers, and Schiano hopes the relationship continues in the NFL.

“Bill has been an incredible person for me, not only professionally but I’ve gotten to know Bill - his son Stephen played lacrosse at Rutgers, thus Bill was down there a lot, he’d come to work out some of our players,’’ Schiano said. “Every time we visited, I learned a ton, No. 1, and No. 2, I felt very comfortable with [him]. This is a no-nonsense guy, I kind of think that’s what I am, and it’s fun to be with people that it’s just it is what it is, there’s no agendas. As these [NFL job opportunities] began to kind of show their head, I called him and asked him for some advice and he was great.’’

Bears coach Lovie Smith said the struggles of former Patriots safety Brandon Meriweather, who signed a one-year deal with Chicago after being released by the Patriots, were emblematic of the team itself.

Meriweather will be a free agent when the signing period begins March 13.

If the Patriots had interest in two of the top players scheduled to be free agents, Steelers receiver Mike Wallace and Lions defensive end Cliff Avril, they’ll likely have to look elsewhere. Both teams sounded confident they will retain their players.

“We’re going to do everything we can to make sure Mike Wallace remains a Pittsburgh Steeler. I think that’s Mike’s belief as well,’’ said Steelers GM Kevin Colbert. “Usually when you have two parties that share the same goal, it’s usually easier to achieve that goal. The thing I can say for sure about Mike is that we want Mike to finish his career with the Steelers.’’

The Lions are hoping to reach a long-term contract extension with Avril, who had 11 sacks, 4 forced fumbles, and 4 passes defensed last season.

The Bills will meet this week with the representatives for receiver Stevie Johnson, who also is scheduled to be a free agent, but coach Chan Gailey didn’t sound quite as optimistic.

In praise of Worcester

Not only did Dolphins coach Joe Philbin attend Worcester Academy, but two of his assistants - offensive coordinator Mike Sherman and receivers coach Ken O’Keefe - were on the Hilltoppers’ staff at that time.

“Worcester Academy was a special time; I only spent one year there,’’ Philbin said. “My dad always said it was the best money he ever spent. It was a great experience. Those guys inspired me to get into the coaching profession, so I’m very lucky to have two of them on my staff right now.’’

Christopher L. Gasper of the Globe staff contributed to this report. Greg A. Bedard can be reached at gbedard@globe.com. Follow him on Twitter @gregabedard.