The entire offense dropped the ball 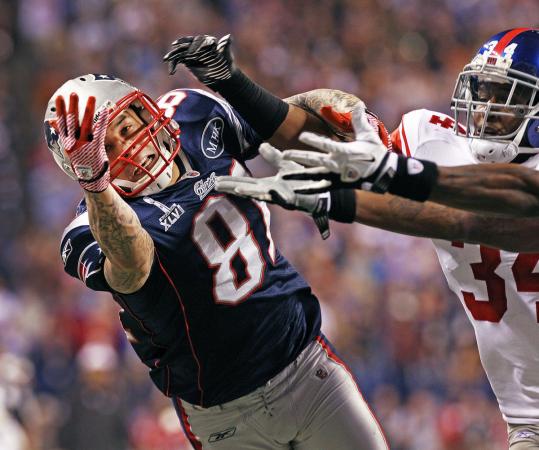 Aaron Hernandez carried the Patriots in the first half of the Super Bowl but had two big drops down the stretch. (Jim Davis/Globe Staff)
By Greg A. Bedard Globe Staff / February 9, 2012
Text size – +

For all the talk about what the Patriots did or didn’t do in their 21-17 loss to the Giants in Super Bowl XLVI - be it losing time of possession, not getting three fumbles, or this or that penalty - the fact is, they held a 17-12 lead and the ball with 6:37 to play in the third quarter and failed to score any more points.

Well, the Giants certainly had something to do with it. The game plan by defensive coordinator Perry Fewell - to take away the short timing passes, crowd the middle to make Tom Brady throw outside the numbers, and have the safeties basically sit at 12 yards to make the Patriots throw deep, where they are uncomfortable and lack weapons - was very well-executed by a disciplined defense.

But it wasn’t terribly original. The teams that give the Patriots trouble - the Jets, Ravens, and the Cowboys and Browns with Rob Ryan - have done the same thing.

It’s just the Patriots usually have two things that help them win out in the end: a dangerous Rob Gronkowski and excellent execution. The offense had neither down the stretch in what looked to be a cavalcade of errors that should have just about everyone kicking themselves during the offseason.

Even the coaching staff didn’t appear immune. It was stunning to see that on the biggest play of the season - third and 11 at the Giants 44-yard line with 4:00 to play - the personnel for Brady to throw to was running back Danny Woodhead, tackle/third tight end Nate Solder, and receivers Wes Welker, Deion Branch, and Chad Ochocinco.

In a season defined by the two-headed tight end monster of Gronkowski and Aaron Hernandez, neither was on the field with a Super Bowl in the balance.

That was just one questionable play in the final 21:37 for an offense that experienced two sacks, six quarterback hurries, three quarterback knockdowns, three drops, two stuffed runs, and an interception - among other miscues - in its 28 snaps.

A rundown of some of the miscues:

Patriots 17, Giants 12, 6:37 left, third quarter First and 10, New England 17: The Patriots went back to the same outside sweep that had picked up 17 yards earlier in the game. It’s a play they hardly ever ran during the regular season. They knew they had a good game-plan-specific play, and went back to it. Instead of staying outside, BenJarvus Green-Ellis cut it back when he saw a hole but was swallowed up after a 2-yard gain by Jason Pierre-Paul (who had beaten Brian Waters) and linebacker Chase Blackburn. If Green-Ellis stayed outside, the play was set up again. But he didn’t.

Second and 8, NE 19: Brady didn’t have anything open but a dump-off to fullback Lousaka Polite, as the Giants dropped eight into coverage, so he threw it away after 6.62 seconds.

Third and 8, NE 19: The Giants rushed just three again. Brady tried to keep the play alive instead of taking the safety valve in Hernandez - who can certainly make plays in the open field - and was sacked (and shaken up) after 5.41 seconds by Justin Tuck.

Fourth and 12, NE 15: Zoltan Mesko punted 43 yards with a poor hang time of 3.78 seconds that didn’t allow Matthew Slater to get in position for a proper tackle on a 10-yard return. The Giants started at the New England 48 and soon kicked a field goal.

First and 10, NE 43 (four plays later): Logan Mankins allowed Linval Joseph to flush Brady from the pocket. Waters slipped and Pierre-Paul knocked down Brady as he underthrew a 52-yard pass to Gronkowski that was intercepted.

First and 10, NE 46 (five plays later): Gronkowski showed the affect of his ankle injury when he allowed Tuck to toss him aside and tackle Woodhead after 1 yard.

First and 10, NY 43 (three plays later): Mankins was easily beaten by Chris Canty, who took down Green-Ellis for a 1-yard loss.

Second and 11, NY 44: Brady chose not to throw in the seam to an open Welker, who dropped a back-shoulder pass that hit his hands.

Third and 11, NY 44: Brady threw incomplete after 5.09 seconds to an open Branch. Brady either expected Branch to sit or the pass was behind the receiver.

Giants 21, Patriots 17 0:57 left, fourth quarter First and 10, NE 20: Brady rightfully gets antsy in the pocket after releasing the ball to Branch after 4 seconds. If Brady waited one more beat, Branch was wide open with a lot of room to run. Instead, the pass was incomplete.

Second and 10, NE 20: Pass was dropped by Hernandez while Sebastian Vollmer allowed a knockdown by Osi Umenyiora.

Third and 10, NE 20: Vollmer allowed pressure from Umenyiora, making Brady step up into a sack by Tuck, who had beaten Mankins on a stunt.

After that, it was all but over with 32 seconds left and 67 yards to go for a winning score. A stunning, confusing end for an offense that had executed so well all season.

Here are the positional ratings from Super Bowl XLVI:

The safety was a bad play and put the team in a bad spot. Brady just should have thrown it out of bounds or at the feet of Green-Ellis. Brady knew he couldn’t hold the ball for 4.5 seconds against that defense as he did there. For the game, Brady held the ball for more than 4 seconds on 13 of 44 dropbacks. That’s a high percentage for him and likely an indication of how much the Giants were taking away the preferred short routes. When holding for more than 4 seconds, Brady was 4 of 11 for 44 yards with an interception, a sack, a safety, and one defensive penalty (11.2 rating). On the rest of Brady’s dropbacks, which were thrown in 3.27 seconds or less, he was 23 of 30 for 232 yards and two touchdowns (120.4 rating). The Giants blitzed Brady just four times - a season-low 9 percent - and rushed just three four times. Brady had a shaky start and finish, but in between he was sensational. We had Brady for 12 plus plays against four poor throws or decisions, plus a sack, safety, and interception. Up and down but certainly good enough to win a tough game.

Woodhead was terrific, with three tough catches, including his touchdown, and crucial yards after the catch on his 19-yard pickup on third and 5 on the penultimate possession. Outside of his 17-yard run that was the result of terrific blocks by Branch and Connolly, Green-Ellis was ordinary (nine carries, 27 yards, 3.0 average). The entire run apparatus, which had been so good down the stretch, was back to its subpar ways. The Patriots didn’t get much movement on inside runs and had to live outside.

Hernandez carried the team for much of the first half. Great move on Blackburn - a total mismatch in space - to get open on the Patriots’ final touchdown, and then to bounce off Deon Grant’s attempted tackle at the goal line. The ball was behind him, too. Once the Giants realized Gronkowski’s ankle wasn’t going to allow him to do much, they got physical with Hernandez, and he had two drops down the stretch to go along with Welker’s fateful drop. Branch actually played very well, and outside of his and Slater’s key run blocks, this group was not good in that department.

The 17 quarterback pressures allowed were the most since the Chargers game last season in Week 7. Only the Dolphins (15 and 16) got that much pressure on Brady this season. The Patriots allowed just three pressures - one on Brady, Matt Light, and a free blitzer - and one stuffed run (1 yard or less outside of short yardage) on the first 19 snaps. On the final 45, they allowed 14 pressures and three stuffed runs. Right tackle was a borderline disaster, as Solder played the first half and was basically benched for Vollmer after allowing 2.5 hurries and two other poor blocks. Vollmer (three hurries, knockdown) didn’t do much better. Everyone had trouble against Tuck (two sacks, three hurries, knockdown, stuffed run). Mankins (sack, two hurries, stuffed run, penalty) didn’t cover himself in Super Bowl glory. Waters (half hurry, knockdown, penalty) was solid. Connolly (knockdown) and Light (knockdown, stuffed run) were excellent.

Defensive line Rating: 2 out of 5

After dominating the previous two games, this group was a disappointment against a Giants line it should handle. The Patriots pressured Eli Manning 21 times during the regular-season game. In this one, they totaled 10 pressures (tied for third-fewest this season), and only one came on the final two drives when the Giants passed on 16 of the first 18 plays. Manning barely looked rushed. Two of the three sacks came when the backs failed to execute chip blocks. After killing the Ravens, Vince Wilfork was erased from this game. The Giants did run away from him at times, and he was doubled 17 times on his 69 snaps (24.6 percent), but even when single-blocked, Wilfork wasn’t able to do much outside of one drawn hold - a huge surprise. Same with Kyle Love, who blew two gaps that allowed big runs. Gerard Warren and Shaun Ellis (2.5 pressures each) did bring it.

Linebackers Rating: 4 out of 5

The Patriots blitzed twice on the Giants’ second possession and then not again until New York was deep in New England territory on the final drive (three times). A very conservative game plan, and it nearly worked thanks to some very good play out of the linebackers (two sacks, half knockdown, 3.5 stuffed runs). But the overall lack of playmakers and aggression was glaring. Brandon Spikes was terrific again, and Rob Ninkovich (half sack, half knockdown, two half stuffed runs) wasn’t far behind. Dane Fletcher had terrific coverage on tight end Bear Pascoe and then Victor Cruz, which forced Manning to take a sack on a crucial third down before the end of the third quarter, leading to a field goal. For some reason, it was his only snap.

Secondary Rating: 2 out of 5

The secondary executed very well except at some crucial spots. Sterling Moore (two passes defensed, open-field tackle on third down) failed to get a good jam on Mario Manningham on the first play of the final drive, and Patrick Chung hesitated just a bit in coverage. Both small miscues gave the Giants just enough room for the spectacular catch. Both Moore and Chung (pass breakup and defensed) played well overall. Kyle Arrington was terrific in limiting Cruz. James Ihedigbo played inside leverage on Cruz’s touchdown yet still allowed him to go inside. Amazing that Jerod Mayo didn’t tip the pass. So Moore and Ihedigbo failed to execute proper jams, which was a pervasive problem from Week 1. Fitting. Devin McCourty’s failure to tackle Hakeem Nicks on second and 3 with 1:15 to play set the stage for the allowed touchdown. Huge play. The Giants kept finding weak link Antwaun Molden when they needed a play.

Another big surprise was the Giants outperforming the Patriots here. That almost never happens. But Steve Weatherford outdid Mesko with three terrific punts downed inside the 10. Each kickoff unit allowed one big return.

ON HIS GAME
Brandon Spikes, linebacker
For a defense that played passively, he was one of the very few tone-setters with one stuffed run and four standout tackles. A great game for him to build off into next season, when he needs to take the next step.

OFF HIS GAME
Logan Mankins, guard
If Nate Solder and Sebastian Vollmer didn’t split time, they’d be up for this. But Mankins failed to perform in his second straight Super Bowl, with one sack, two hurries, and one stuffed run allowed. He also had a false start and a poor run-block.