Odds are with their latest line 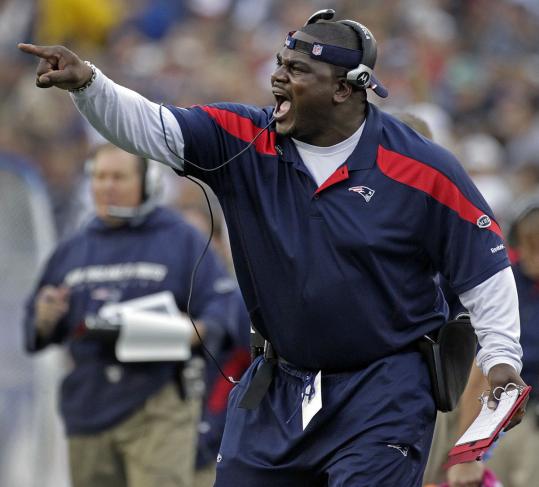 At one point during Patriots training camp this season, each of those defensive linemen was on the roster, and they weren’t the only ones: Bill Belichick had no fewer than 20 in camp, whether they stuck around a day or two, suffered an injury and were lost for the year, or remain today, as the Patriots face the Giants in Super Bowl XLVI.

After using a three-man defensive front as his base package for years, Belichick went into camp this season focused on switching to a 4-3. The 3-4 is still part of the package, but in 14 of 18 games, the Patriots started with a four-man front. Last season, that happened once (they started with only two down linemen in two games, three-man fronts in the other 14).

It took a while for all the players to grasp the concepts and techniques, a problem compounded by a training camp that was both shorter in length and on-field intensity - under the new collective bargaining agreement, players couldn’t be in full pads for the first few days, then only once a day.

“Coming from a 3-4 style defense to a 4-3, it’s a totally different technique, mind-set, everything,’’ said Brandon Deaderick, who began the season on the physically-unable-to-perform list. “Even though we did run it last year some, it wasn’t our base front, so of course when you go to a different scheme, that takes some getting used to. But we had a great mix of personnel, we had the speed guys, we had power guys, speed and power guys, quick guys - so I think it was a nice blend and ultimately, like doing anything new and different, you’ve just got to work at it and perfect your craft.’’

Once the group of 20 began to be whittled down - Warren was a surprise cut just a day into camp; Moore, Alex Silvestro, and Darryl Richard were part of the final cuts; and Pryor and Wright were placed on injured reserve in September and October, respectively - the unit did show improvement.

After four weeks, New England was ranked 18th against the run, a statistic the linemen have long prided themselves on. But by Week 6, the ranking improved to ninth, and they remained in the top 10 through Week 13.

“Once we got rotation and the looks and the reps and all that good stuff, I think we started playing more sound upfront,’’ said Wilfork. “But it took those games. Normally it won’t take games, it will take offseason, minicamp, it will take training camp. Coming into the season, what we had to deal with, with the lockout and everything, I think a lot of teams had to go into the season saying, ‘Hey, it’s going to take some games for us to get the reps that we actually need as a team.’ It happened for us also.

“But once we did that, I think guys started to feel comfortable about playing the defense, understanding the plays that we needed to make and being successful. I think they’ve done a really good job of that all year.’’

Late-season slip-ups against the Redskins, Broncos, and Eagles meant their ground-game ranking slipped. Deaderick said it was some “little, itty-bitty’’ mistakes. Then Andre Carter was lost to a torn quadriceps and adjustments had to be made again.

Longtime assistant Pepper Johnson has been the defensive line coach since 2004. It was his job to oversee the changes this season, both as the personnel and techniques changed.

“They’ve done real well. We’ve come together and really started working with each other very well,’’ said Johnson. “We’ve had some ups and downs. We’ve had some bad plays. Specific language plays, but we also have some real good plays out there, and I think that’s expected of guys. The A-plus plays are the ones that you strive for, go over, and talk about in the meeting rooms. It’s not just for my emphasis, but things that the players preside over. I definitely let them elaborate and talk, and talk about things that they envision. Then, they go out there and execute it, which is tremendous.’’

What was once a mass of 20 has been reduced to seven or eight for about a month, and in the postseason, the group has been stout against the run and applying pressure.

Against Denver in the postseason, the line didn’t repeat the mistakes it made in the Week 16 meeting, and then the Ravens’ Ray Rice, who has gashed New England (and every other team, really) was held in check in the AFC Championship game.

Now the unit has one last challenge: the Giants offensive line, running backs Ahmad Bradshaw and Brandon Jacobs, and trying to get to Eli Manning.

“They have a great defensive front that is playing great,’’ Giants center David Baas said. “Everybody wants to talk about Wilfork but they have [Mark] Anderson, who is playing really well and there is plenty of them to go around. You can’t just single out a couple guys.

“They are going to try to exploit things against us that they see on film and we’re going after them with things. It is going to be a battle. We’ve created a game plan to help us with matchups and to create opportunities where we saw certain things. It comes down to execution. We know we are going to get a lot of different looks and we are trying to continually go through mentally, physically any looks or changeups that we think they might throw at us.’’

After a number of challenges and changes, New England’s linemen will be ready.