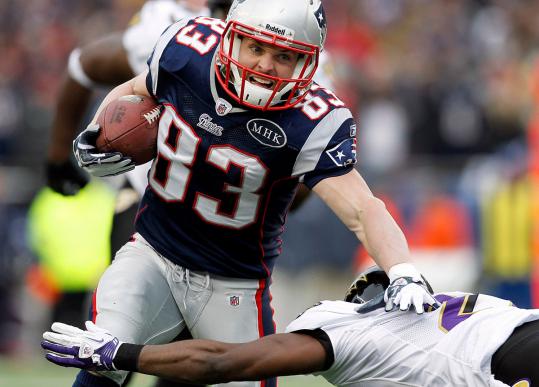 INDIANAPOLIS - Against the Patriots on Oct. 10, 2004, Wes Welker, then playing for the Dolphins, became the first player in NFL history to record a field goal, extra point, kickoff, punt return, and kickoff return in the same game.

The Patriots beat Miami at Gillette Stadium, 24-10, and about the only thing Welker didn’t do for the Dolphins that day was catch a pass.

But an impression was indelibly left on the New England decision-makers. Drawn by his versatility, they gave Miami two draft picks in a trade for Welker prior to the 2007 season. Since then, he has never been called on to kick. But there has never been a game in which he hasn’t caught a pass.

Welker’s numbers as a Patriot are staggering. Over five seasons and 83 games, Welker has 600 receptions, an average of more than seven per contest. Included in that are 46 catches in six playoff games, never fewer than six.

To say that Welker is an important part of the Patriots offense probably wouldn’t be fair, because it wouldn’t be giving him enough credit.

“He comes out consistently and plays at a high level, so I don’t know how much more important someone can be,’’ said teammate Julian Edelman, like Welker a receiver and punt returner.

What’s not clear is whether Welker will be an important part of the Patriots’ future. Lost in the excitement of the franchise’s seventh appearance in the Super Bowl is this: Today’s game at Lucas Oil Stadium could be Welker’s last in a Patriots uniform.

As an unrestricted free agent after this season, Welker would be free to sign with another team, unless the Patriots place their franchise tag on him, which many assume they would do if a contract extension can’t be reached. A new deal, though, appears to be what both sides would prefer.

Patriots owner Robert Kraft, before the team left for the Super Bowl, said, “We want him here. Hopefully when the season ends, both sides will be wise enough to consummate something. He’s pretty special.’’

He is also about to receive a nice bump in pay. Welker’s base salary for 2011 was $2.15 million, which put him 22d in the league for his position. None of the 21 players ahead of him caught as many passes during the regular season as Welker’s 122, and only Detroit’s Calvin Johnson (1,681) had more yards than Welker’s 1,569.

In four of the five seasons that Welker has been with the Patriots, he has caught at least 100 passes and eclipsed 1,000 yards. The exception was 2010, when he had 86 for 848, but Welker tore knee ligaments in the 2009 regular-season finale, and his return for the following season was uncertain.

The fact that he was ready for the opener, eight months after his injury, surprised many, and spoke to his dedication and willingness to work hard.

His best season has been this one, and he is expected to be a primary target for Tom Brady tonight, much like four years ago against the Giants, when Welker tied a Super Bowl record with 11 catches.

Back then, he was stuck in the stands on Super Bowl Media Day, overshadowed by the other stars on his team. This past week, he has been front and center, singled out and sought after.

“It’s kind of surreal in a way,’’ Welker said. “You just strive to be the best you can, and do what you can out there on the field. It’s great to see your career develop into what it is today.’’

Welker is certainly most responsible for that, but having a great quarterback throwing him the ball and playing in a pass-friendly offense that utilizes his strengths hasn’t hurt, either.

Small by receiver standards - Welker is generously listed as 5 feet 9 inches and 185 pounds - he has learned enough over his eight seasons in the league to come up big, game after game. He has been durable, dependable, and consistent.

Welker’s impact can come in many different ways: a third-down catch in traffic that keeps a drive alive; a key block on a running play or catch by a teammate; a 99-yard catch-and-score in the season opener against the Dolphins, the team that traded him away.

“I tell you what, he has done a great job this season of taking care of himself,’’ said receivers coach Chad O’Shea. “He’s been on a very strict diet, he’s done a great job within our building of training, of doing the things necessary that he needs to do to make it through the season at a high level.

“He’s an unbelievable worker, he’s got outstanding intangibles, does a great job of preparation, understands when to get down and not take unnecessary hits. He’s too hard of a worker, and he’s matched that with a lot of talent as far as route-running and overall quickness.

“I think the difference for him is the investment that he’s made off the field, which he’s always done, but I really think he’s done a great job this season and it’s helped him endure.’’

The Super Bowl always has a tendency to spotlight these, but Welker’s truly has been an unexpected journey. He went to the only Division 1 school that offered him a scholarship (Texas Tech). He wasn’t drafted, was released after appearing in one 2004 game for the Chargers, then traded away by the Dolphins.

But he found a home with the Patriots, and has transformed himself from a multidimensional novelty in that 2004 game into one of the best receivers in team history. Whether he gets a chance to pass Troy Brown as the all-time reception leader among Patriots (only regular-season catches count, and Welker’s 554 trail Brown by three) remains to be seen.

The future can wait. It has to. There is a much more important game to play tonight.