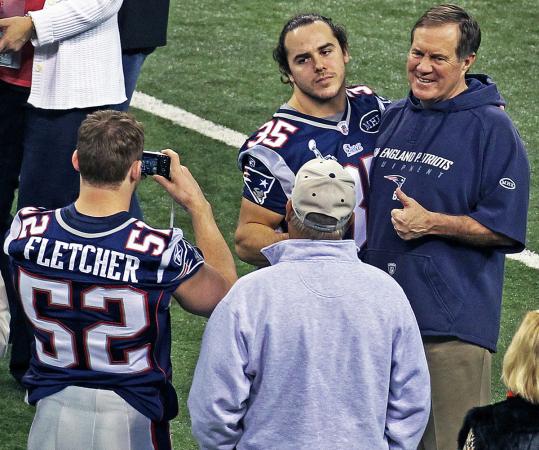 Bill Belichick was all smiles as he posed with Ross Ventrone for a picture snapped by Dane Fletcher. (Jim Davis/Globe Staff)
By Bob Ryan Globe Columnist / February 5, 2012
Text size – +

INDIANAPOLIS - Everybody wants to know why Bill Belichick has been so downright bubbly - by his standards - this week.

The answer is simple. He loves this particular group, perhaps as much as any he’s ever coached.

It’s far from his best team. There’s no 1,600-yard rusher such as Corey Dillon. There are no Seymours, Bruschis, Vrabels, Harrisons, Laws, or Milloys on defense. Ah, yes, the defense. As the coach himself might say, “It is what it is,’’ not as bad as the gruesome yardage totals would indicate, but not the lock-down, get-’em-off-the-field defense one would ordinarily associate with a Super Bowl champion, either.

But it became clear at various points of the season that he was very pleased with this team. After the win over the Eagles, for example, he stood there far longer than his norm taking questions, to the point where you half expected him to say, “C’mon, guys, ask me more questions so I can heap more praise on these guys.’’

Now you would think the way to earn your way into the coach’s heart never deviates. Work hard, keep your mouth shut, do your job. Your job, not the job of the guy next to you, but your job. We must surmise that it’s harder for some guys to pull this off than others. And, as always, raw talent is merely the jumping-off spot. Arrogant, me-first raw talents don’t last long with the Bill Belichicks of this world.

Belichick loves this team so much he even forgave it its little late-season foibles, such as falling behind by a combined 38-0 in the last two games against Miami and Buffalo. I’m sure the day-after film sessions weren’t 100 percent pleasant for the lads, but what the coach did for public consumption following those comeback triumphs was to accentuate the positive. The words “proud of’’ were in there somewhere. No matter what happened on the field this season, Belichick always made it clear that he was indeed proud to be associated with this team.

It turns out he’s not alone. A major team leader is right there with the boss. He, too, is very proud to be associated with this team.

“If Bill has said that, well, I feel the same way,’’ announces Vince Wilfork, who is a certified Big Man with the Patriots in more ways than one.

“I feel the same way toward this team, no matter how you slice it,’’ Wilfork says. “This is a together group, a special bunch, guys that love football. I cannot express how much the team means to me.’’

Wilfork is not all that surprised to be at Super Bowl XLVI. “From Day One, we knew,’’ he says. “If we play football the way we know how to play football, we can beat any team. If you look at the games we lost, we weren’t blown out. We had lost opportunities.’’

There is another important individual who feels the same way about this edition of your New England Patriots. I am speaking of the man who signs the checks.

“This is my 18th year,’’ says Robert Kraft. “There is only one other team that I loved the locker room [like this], but this team is something special. This might be my favorite.

“I have, like, 53 extra sons. They presented me with a painting that had to be planned out 6-to-8 weeks in advance. In this world where wealthy players are narcissistic and selfish, to take the time to give me something that was meaningful, I think every coach and player contributed to that. The painting will be in the locker room, and to know the players come in from the field and touch it and kiss it; it’s brought them together.’’

The painting, of course, is of Bob Kraft’s recently deceased wife, Myra.

How does all this affection translate to the playing field? No one knows the answer to that question. What we do know is that no Belichick team takes the field anything less than 100 percent prepared.

Special teams man extraordinaire Matthew Slater summarizes it well. “I think there’s definitely a mentality that you have to have, you just don’t come in here and think ‘We’re the Patriots and we’re going to win and everybody else is lying down.’ That’s not the case at all, so there’s a lot of hard work that goes with that. But it does start with a mind-set of ‘Hey, we’ve got a goal in mind and we’re going to do everything we can to achieve that goal of winning.’ ’’

You might even say there really is such a thing as a Patriot Way.

“It’s consistency, coming to work every week with the same mind-set, never taking anything for granted, never taking a week or a day for granted,’’ suggests guard Brian Waters, a seasoned NFL veteran playing his first season in Foxborough.

Every coach is selling something. The question for every coach, in every sport, at every level, is “Are they buying?’’

The answer in this case is an emphatic “Yes.’’ So if the coach is happy, you should be happy, too.