Ferentz has found home with Patriots 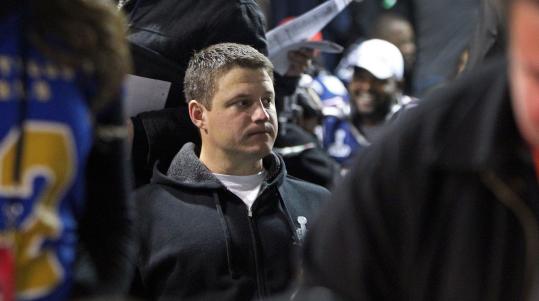 INDIANAPOLIS - At first, the football life was one of nomadic hardship for Brian Ferentz, the 28-year-old tight ends coach of the Patriots and son of Iowa head coach Kirk Ferentz.

Once Brian would begin to feel at home in his new surroundings, it was time to move with his father to a new job in a new town, which meant enrolling in a new school and making new friends.

Four times during the years between ages 7 and 16, Ferentz was uprooted by his father’s coaching career, which took the family from Iowa City to his father’s first college head coaching job at the University of Maine. It led to relocations for NFL jobs in Cleveland, where his father coached the offensive line for Bill Belichick, and to Baltimore before his father’s career wended its way back to Iowa City.

The latter move came as a welcome return to Brian’s birthplace, where his father started out in 1981 as an offensive line coach for legendary Iowa coach Hayden Fry.

It was where Brian spent the first seven years of his life and grew to be a lifelong fan of the Hawkeyes, and where he later was as an offensive lineman from 2001-05 for his father, now in his 13th season as Fry’s successor.

“The moves weren’t always easy, like I think it is for a lot of families that move,’’ Kirk Ferentz said from Iowa yesterday. “I know when we left Cleveland, it was a very difficult move for him. When we left Iowa, quite frankly, back in ’89, it was a tough adjustment. Cleveland was easy, but [leaving for] Baltimore was hard. It was a process for both of us.’’

Brian grew to appreciate the football life. He embraced the opportunities it presented him, including the chance to win a Super Bowl ring in just his fourth season with the Patriots when they face the Giants in Super Bowl XLVI Sunday.

After going undrafted in 2006, Ferentz landed in Falcons training camp.

“It’s every kid’s dream to play in the NFL,’’ he said. “I never got to play in a real NFL game. I played in a preseason game, which was great. In fact, the first preseason game I ever played was against the New England Patriots in 2006.’’

After spending the 2006 season on the Falcons’ practice squad, Ferentz was cut in 2007.

“That was the last moment for me in professional football.’’

As a player, that is.

A call from Scott Pioli, then the Patriots’ vice president of player personnel, convinced Ferentz his future in football was behind the scenes as a scout. “I ended up going into the organization the next year, going upstairs with Scott,’’ Ferentz said.

But it wasn’t some cushy office job. In fact, the job didn’t even come with an office.

“The first time I went up there to visit him, he and three other guys had desks out in the hallway, so he was truly starting at the bottom,’’ Kirk Ferentz said with a chuckle. “They were making DVDs and things like that for scouts. He started at the bottom.’’

But Brian worked his way up by moving downstairs to the locker room, where he took a coaching assistant position in 2009. The next season he became an offensive assistant coach under Bill O’Brien. His role expanded this season, when he was charged with tutoring talented tight ends Rob Gronkowski and Aaron Hernandez, a challenge he embraced even though he never really played the position.

“In eighth grade, I actually played tight end,’’ Ferentz said. “I caught one ball, for like 4 yards - on a check-down,’’ Ferentz recalled. “And that was like my only competitive catch . . . ever.’’

“And when was that? In practice?’’ the elder Ferentz said, needling his son. “He was probably screwing around with some other guys. I’ve seen a lot of his action, but I don’t remember that catch.’’

When told it was when Brian was in junior high, his father replied, “Oh, OK, I missed a few of those games.’’

It was but one of the many sacrifices in a football life. But Brian made up for lost time when he got the opportunity to play for his father and witness him do his job.

“When you grow up in a household where your dad’s in coaching, you don’t see your dad as much as you would if he had more of a 9-to-5-type job,’’ Brian said. “So, growing up, I had a great childhood. My father was very involved in my life.

In his fourth season on Belichick’s staff, Ferentz has clearly drawn upon those experiences, helping Gronkowski and Hernandez emerge as a monster tandem. They combined for 169 receptions and 2,237 yards, the most by a pair of tight ends in NFL history.

“For me to sit here and take any credit for what Gronk and Aaron have done this year would be wrong,’’ Ferentz said. “They work as hard as you can possibly work at getting better at the game. Are they young? Can they be a little wild and hard to deal with sometimes? Sure, like all young people.

“They like to have a good time, but when it comes time to do work, I can’t complain,’’ Ferentz said. “For me to take any credit for them wouldn’t be right, because they’re so self-made.’’

The same could be said of Ferentz.

“Brian is very mature for his age, and he has a lot of football experience,’’ Belichick said. “I think that the whole life experience of growing up in a coaching family, growing up with a coach and having football in your blood almost from the day you were born, you pick up some things by osmosis. I know that is the case with him, as it was with me and many others who have lived the life in a football family.’’

Ferentz’s journey clearly resonated with Belichick, one football lifer to another.

“He’s done a great job in all of the responsibilities that he has, particularly in the development of our young tight ends,’’ Belichick said.

It has been Brian Ferentz’s aim to share that knowledge.

“My dad’s always told me that good coaches are great teachers,’’ he said. “And all I ever wanted to do was to be like my dad.’’

Not the same ballgame