Standout symbols of a program on the rise 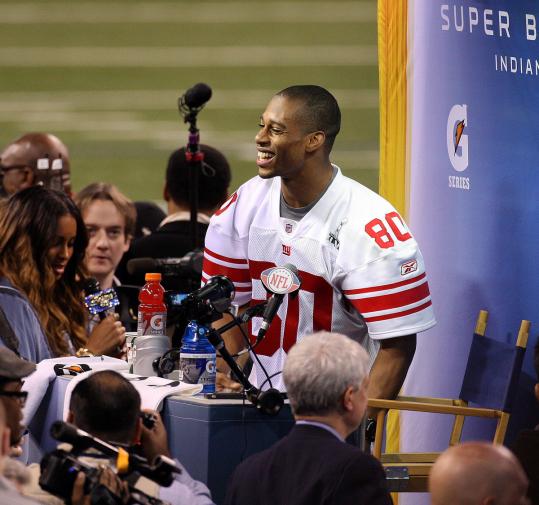 INDIANAPOLIS - Charley Molnar hasn’t spent much time in the football offices at the University of Massachusetts since he became head coach in December.

With the program moving up to the Football Bowl Subdivision next season and joining the Mid-American Conference, Molnar has been on the road recruiting. But he did find time to do a little interior decorating.

Hang a left when you walk through the doors, and there on the wall are super-sized photographs of Patriots defensive back James Ihedigbo and Giants wide receiver Victor Cruz. The display is a reminder to the current players and recruits visiting campus that the Minutemen have two players in the Super Bowl.

“I want every player who comes through our program to know they can do great things, just like Victor and James did,’’ Molnar said. “They were on the same practice fields and in the same weight room and look where they are now.’’

Until this season, only two players from UMass had appeared in the Super Bowl.

Bruce Kimball, a Beverly, Mass., native, was a reserve offensive lineman for the Redskins in 1984 in their loss against the Raiders.

In 1967, Phil Vandersea played for the victorious Packers in Super Bowl I. A native of Whitinsville, Mass., Vandersea was a linebacker and defensive end.

Boston College has five players on the active rosters of the Patriots and Giants, while Florida, Fresno State, and Michigan have four each. But UMass has more than Nebraska and Texas, who each have one.

“Every recruit who has stepped foot on campus knows about Victor and James already,’’ Molnar said. “All we’re doing is giving them the rest of the information and filling out the story.’’

Today is national signing day for recruits, and Molnar believes that Cruz and Ihedigbo being in the spotlight helped his efforts as UMass makes the difficult transition to the next level.

“Absolutely,’’ he said. “Recruits can look at UMass and say, ‘If those two can do it, why can’t I?’ Any time one of our alumni does something special on a national scale, it’s to our benefit.’’

None of this was expected. Cruz did not become a starter for the Minutemen until his junior year in 2008 after being expelled for poor grades the year before. Ihedigbo was a walk-on from Amherst Regional High who earned a spot on the team after being red-shirted as a freshman.

Cruz and Ihedigbo developed into all-conference players but attracted little attention from NFL scouts. Both went undrafted and latched on as free agents. Ihedigbo spent parts of three seasons with the Jets before being released and signing with the Patriots in August.

Cruz appeared in three games for the Giants in 2010 without making a catch. He emerged as a star this season, catching 82 passes for a franchise-record 1,536 yards and nine touchdowns.

“People on campus are really happy to see what they’ve done,’’ said Jay Asser, sports editor of the Massachusetts Daily Collegian. “Most of the students here are Patriots fans and they all realize that Ihedigbo is from UMass. He’s big around here.

“Now Cruz has a big following, too. Even people who aren’t UMass sports fans per se have a lot of pride about what they’ve done.’’

As Cruz and Ihedigbo prepare for the Super Bowl, the UMass men’s basketball team is 16-5 and undefeated at home in 11 games.

“From my perception, it’s nice to see. UMass sports are starting to gain a little more attention,’’ said Asser, a senior from Salem. “It couldn’t come at a better time. It’s a great chance for the football team to capitalize on that.’’

Bob Otrando, the school’s strength and conditioning coach for 19 years, said the excitement on campus is something you can feel.

“Everybody is proud of the fact that we have two players in the Super Bowl,’’ he said. “The big question is who you’re going to root for.’’

Otrando recently met with a group of recruits and their parents in the weight room just as ESPN began showing highlights of Cruz playing for the Giants.

“I told them to watch Victor before I started talking. It seemed like divine intervention,’’ Otrando said. “It gives us credibility as a program, being able to say we helped produce Victor and James. The exposure can’t be beat.’’

Otrando is the only coach on the staff who was with the program when Cruz and Ihedigbo were playing. He thought both had potential, but the idea of NFL careers seemed unlikely.

“What are the odds of having two players in the Super Bowl?’’ he said. “One is like a dream come true. The odds are less than 1 percent a high school player can get to the NFL. But they worked hard and found a way.

“Victor had great athletic ability and James had that work ethic. I use them as examples all the time. I’m so happy for them. Victor was a humble guy and he had his rough times. But now he’s showing people what he can do. James was the same way.’’

Molnar, who came to UMass from Notre Dame, is working to develop a relationship with Cruz and Ihedigbo. He met Ihedigbo at Gillette Stadium on the day he was named coach at UMass. They have since exchanged text messages.

“It’s just a great thing for our football team to have two players in the spotlight like they are,’’ Molnar said. “I’m excited to watch the game. They’re representing their teams but also our university. That’s something we can really build on.’’

Before they were Pats