No gain without some pain 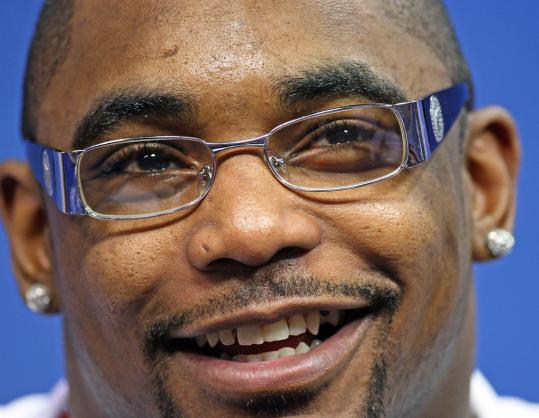 INDIANAPOLIS - On most days, when he walks into the Giants practice facility, Ahmad Bradshaw looks like he’s shaking off a car collision or two.

At this point, after suffering stress fractures in both feet the past three years, he’s practically walking on gravel.

He’s been listed on the Giants’ injury report every week since Week 9, after suffering another stress fracture in his right foot in October.

But he’s played in all but four games this season, leading the Giants in rushing (659 yards), toughing it out one grueling step at a time.

“With me and my feet, man, some mornings I just don’t want to get out of bed,’’ said Bradshaw. “It’s tough to. You get out of bed, you’re walking on broken bones. But I’ve gotten through it. I’ve been blessed, been able to fight through it, just fight hard.’’

When his foot failed him this season, he didn’t have the slightest idea. He carried the ball 13 times for 50 yards in a win over the Miami Dolphins Oct. 30 and when he felt the pain, he figured it wasn’t enough to keep him off the field.

“When I first played with my fracture, I didn’t even know it was fractured,’’ he said. “When it happened this time, I was like maybe I could play through it.’’

He couldn’t. The injury cost him four games. During that stretch, the Giants went 1-3. Sitting out was difficult for Bradshaw, but in the locker room, among players who had seen him play with stress fractures, the issue was never if Bradshaw would return, but how soon.

“It was never a question for us that he was going to play through,’’ said Brandon Jacobs, Bradshaw’s running mate in the Giants backfield. “He just had to give it a little time for the bone to heal and he’d be back.’’

When Bradshaw returned in December, the Giants won three of their final five games before going on the tear that set up their Super Bowl XLVI matchup with the Patriots.

Teammates see his toughness and feed off of it.

“I always told him he has one of the biggest hearts on this football team,’’ said defensive end Justin Tuck. “Considering what he went through this year with the injuries to his feet and things like that - he’s not healthy right now - and he still continues to go out there and work his butt off every Sunday. For players on this team that know what he went through this year with his body, Ahmad is very inspirational to watch.’’

Jacobs, who rushed for 571 yards accepting his role complementing Bradshaw, said “He don’t look hurt to me when he walks in. He has a few problems, but nothing crazy. He’s fought through it, he’s been strong, and he’s an inspirational person to me.

“I can look at what he’s gone through and what he’s fought through and played with and know that there’s worse things he can have. But I think he’s fighting strong and hanging in there.’’

The bruises he’s played with are nothing compared with the ones he’s left defenders with this season.

Bradshaw has left a string of bodies scattered across the field, running over and more often through tacklers. There’s probably still a skid mark at the 6-yard-line at MetLife Stadium from where Bradshaw trucked defensive back Brodney Poole in the Giants’ Week 16 win over the Jets.

He’s racked up 432 yards after first contact, according to ProFootballFocus, or 66 percent of his total yardage. Because of his 5-foot-10-inch, 214-pound frame, Bradshaw’s crash-and-bang approach to running sneaks up on defenses. In theory, Jacobs is supposed to be the power back and Bradshaw would be the changeup, but when he tried to describe it, Tuck stole a line from a 49ers defensive back.

“He’s a power back in a scat back’s body,’’ Tuck said. “It is interesting to watch how many times he falls forward. Ahmad isn’t the biggest of running backs, but he runs with a lot of heart, with a lot of determination.

“They complement each other very well. Brandon comes in and, as defensive players we like to say, softens them up. Then Ahmad comes in and at first you think he’s going to try to run away from you, but I’ve seen Ahmad break more tackles this year than probably even Brandon. I think mentally, it kind of wears on a defense because you don’t know what to expect from him. He has the ability to break you down and run past you but he also has the ability to run through you. So you have to play him honest. And if you’re a defensive player playing him honest, he’s going to win most of those battles.

Vince Wilfork has had some run-ins with Bradshaw and said tackling Bradshaw is “like tackling myself.’’

“I think Bradshaw is one of the most underrated running backs in the league,’’ Wilfork said. “This guy - I’ve been saying this for a long time - this guy is a tough, tough running back. I put him up there with some of the best in the game today.’’

Bradshaw was a rookie when the Giants beat the Patriots in Super Bowl XLII, and joked that even though he has one ring, “My other hand’s jealous.’’

His hands aren’t the issue though, and he says at this point, with a chance to rest last week and prepare this week, neither are his feet.

“Now, I feel healthier than ever,’’ he said.

Before they were Pats