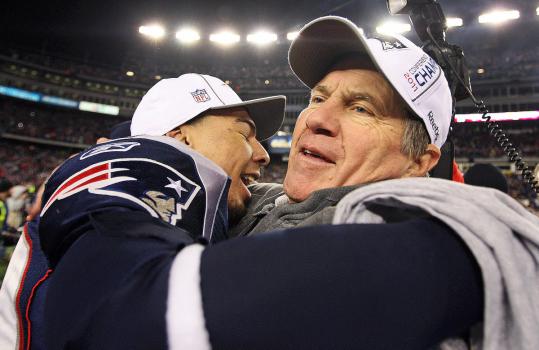 In late November, after returning to the Foxborough area after a win in Philadelphia, a game in which he made his third consecutive start for the Patriots at safety, Sterling Moore was wandering around the Best Buy in Mansfield when he was approached by not one but two shoppers looking for help.

Moore wasn’t wearing one of the bright blue shirts employees of the electronics store must don; he was in a gray hoodie, about as nondescript a piece of clothing as there is.

But two months ago, Moore was about as nondescript as his hoodie, a player largely unknown, even to Patriots fans, who was being plugged into a secondary that was having its share of issues and injuries.

After last Sunday’s AFC Championship game, however, when he broke up two potential game-winning touchdown passes, every New England fan knows his name.

Whether they’d recognize him at Best Buy is another story entirely; Moore joked Sunday night that he probably could still walk through the store anonymously.

The funny thing is that, once upon a time (don’t all Cinderella stories start that way?), Moore was employed by Best Buy in Pittsburg, Calif., and as he tweeted on that November day, “4 years ago I woulda been happy to answer ur questions.’’

It was around that same time frame that Moore’s football journey began. He started playing the game only as a senior in high school, and began his college career at Laney College, a junior college close to home, in Oakland.

He was an All-JUCO pick in California, but bigger programs weren’t exactly beating down his door. One of the programs he received an offer from, Hofstra, wound up dropping its football program.

But fortunately for Moore, Southern Methodist defensive backs coach Derrick Odum saw him, and liked what he saw.

“I looked at the film and I said, ‘This guy, he can play the game. I’m taking him,’ ’’ Odum said yesterday. “And I got a lot of flak from some of the people that are around the program, as far as he wasn’t a highly recruited guy and that type of thing.

“I said, ‘Well, I don’t know how he’s ranked but the guy can play the game and that’s all I go off of.’ We took him and from day one he did a great job for us.’’

It wasn’t all smooth sailing for Moore at SMU. When he was on the field, he was a standout, with 19 pass breakups and 22 passes defensed in two seasons. But he played in just eight games as a senior, sustaining a left knee injury that required three surgeries in two years (his kneecap kept popping out of place).

His hometown Raiders gave him a shot (Moore said he despised the Patriots for the Tuck Rule game against Oakland growing up, though he has gotten over that this year), but Moore was released from their practice squad a couple weeks into the season.

The 5-foot-10-inch, 190-pounder wasn’t jobless for long, however, acing a tryout for the Patriots and being signed to their practice squad nine days after Oakland cut him.

“When he did get cut, I had a good feeling that he would get picked up because he had a lot of good things on film from preseason games with [the Raiders],’’ said Odum. “It worked out well. He ended up going to a great organization and I was really happy for him. I knew if he got another opportunity, he was going to do well.’’

Before landing at SMU, Odum was at Utah, where he coached Chargers All-Pro safety Eric Weddle. When asked why he considers Moore to be special, Odum points to similarities he sees between the Patriots rookie and Weddle.

“Some guys have that knack for playmaking ability,’’ said Odum. “Some guys are guys that are close, they’re right there, but they don’t finish. And he’s a finisher. He finds a way.

Ever the coach, Odum sent Moore a text after the AFC title game, reminding him to keep his head up when he tackles - Moore did give up a touchdown to Torrey Smith - but also to tell him good job on his pass breakups in the closing seconds.

“The bigger the game is, the bigger he plays,’’ Odum said.

If the rookie from the Bay area can come up with a big play in the biggest game of all, his Cinderella story will be complete. And he likely would lose any chance to be anonymous in the Mansfield Best Buy.