Wilfork no longer a forgotten man 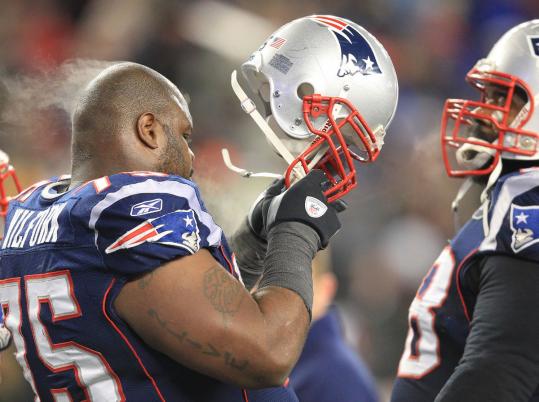 FOXBOROUGH - The talk all week leading up to yesterday’s AFC Championship game was about the stars.

For the Patriots, it was quarterback Tom Brady throwing to Rob Gronkowski, Aaron Hernandez, and Wes Welker.

Ravens talk centered around Terrell Suggs, Ed Reed, Haloti Ngata, and Ray Lewis, running back Ray Rice, and whether quarterback Joe Flacco could get it done.

The heartbeat of the team thumped louder than anyone in the 23-20 victory at Gillette Stadium that sent New England to its fifth Super Bowl in the past 11 seasons.

“He leads the way for us on defense,’’ coach Bill Belichick said. “Vince is obviously our most experienced player and he’s been a great leader, great captain all year. His leadership has been tremendous.’’

It might have been the finest performance in Wilfork’s sterling eight-year career.

Considering the stage and stakes, it likely very well was.

Officially against the Ravens, Wilfork had six total tackles, a sack, and three tackles for a loss.

Throw in a half stuffed run (carries for 1 yard or less outside of short yardage), and four quarterback hurries (one on which he caused Mark Anderson’s sack) for a season-high five total quarterback pressures.

And Wilfork saved his best for when the team really needed him.

Fellow defensive lineman Kyle Love talked about the game plan for their group to foreshadow the play.

“We knew their offensive line likes to run, and teams run with them,’’ Love said. “That’s where you get hurt. Our main thing was not to run with them and create our own seams and slow [Ray Rice’s] momentum down.’’

The Ravens were in a shotgun formation with three receivers. The Patriots had three down linemen and Wilfork, who lined up most of the day at left end on right tackle Michael Oher on running downs, kicked inside and was over center Matt Birk.

It didn’t happen. Wilfork stayed on his mark, didn’t run with the play, beat Grubbs straight up the field, and took down Rice for a 3-yard loss that knocked the Ravens out of field goal range for a game-tying attempt.

“I think to be honest with you, on the run, I think they just cut me loose,’’ said Wilfork, who helped hold Rice to a 3.2-yard average. “I’m always taught when someone [doesn’t] block you, it’s a set up and all. I don’t know if they just missed a block or it was a setup block and I just beat it. I don’t know. Critical plays like that, you just have to take advantage.

“At that split second, the only thing I saw was: Did he have the ball? If it was a setup block, they got me. They didn’t get me.’’

The Ravens decided to go for it on fourth and 6. A quick line shift again put Wilfork over Birk before the snap.

Birk had Wilfork one-on-one and the captain drove Birk straight back 7 yards into Flacco, got a hand on the quarterback, and wouldn’t let go as Flacco just threw the ball out of bounds.

“He’s a great player, he really is. Even though he makes the Pro Bowl and stuff, probably underrated.’’

Wilfork certainly holds great value in the locker room. All of the players said that Wilfork, the only player on defense with a Super Bowl ring, had a different look in his eye the entire week.

“To be honest with you, Vince was ready last week to play this game,’’ linebacker Jerod Mayo said. “He has a ring and no one else on this defense has a ring. And he just expressed the joy that you would get from winning this game and he’s not a liar.’’

Wilfork was triple-teamed once, and doubled nine times.

Maybe Baltimore should have been more worried about Wilfork. Then again, none of us was talking about No. 75 during the week.

The heart of the Patriots beats onto the Super Bowl.