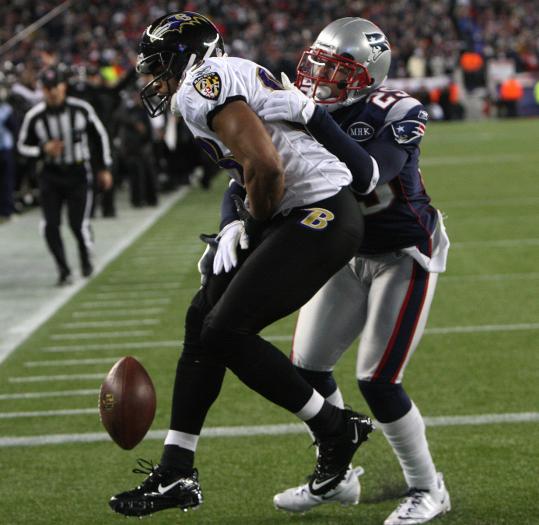 Sterling Moore knocks the ball out of Lee Evans’s hands in the end zone, saving what may have been the winning touchdown. (Barry Chin/Globe Staff)
By Shalise Manza Young and Michael Whitmer Globe Staff / January 23, 2012
Text size – +

FOXBOROUGH - It is, as Devin McCourty mused, “the life of a DB.’’

In one game, Patriots rookie Sterling Moore experienced both the lows and highs of playing cornerback - of playing sports - when he gave up a touchdown to the Ravens’ Torrey Smith in the third quarter to give Baltimore its first lead of the game, but then broke up back-to-back passes in the closing seconds to force the field goal attempt that Billy Cundiff missed, giving the Patriots the win.

The first pass Moore broke up, on second down, was intended for Lee Evans in the end zone, initially looked like the winning touchdown. But at the last second, Moore batted it out of Evans’s grasp.

Moore said after the game he didn’t even know what defense the Patriots had called on the play; since Baltimore was in hurry-up, he simply scrambled to his position and decided to play man-to-man. It worked.

Did he ever find out what the defense was?

“No, not yet,’’ he said a little sheepishly.

On third down, Moore found himself in coverage on tight end Dennis Pitta. Pitta asserted after the game that Moore held him, but Moore gave a wry smile when asked if he felt that he had.

“I knew he was on my back pretty good,’’ Pitta said. “It’s one of those plays at the end of the game where you don’t really anticipate getting a call. You just have to fight through it. I didn’t put up much of an argument because I knew that’s probably the way it would go. We would love to get the call, but we don’t anticipate getting those.’’

Moore said one of the first people to come up to him after Smith’s touchdown, when he had the receiver wrapped but couldn’t bring Smith down, was Brandon Spikes. Spikes told Moore to forget about it, and that all of the Patriots were giving up plays.

The rookie, who grew up in Oakland as a Raiders fan and said he despised the Patriots after the Tuck Rule game in the 2001 playoffs - a feeling he’s gotten over this year - saw his game yesterday unfold like his season has this year.

He was re-signed and has been playing a role on defense over the last few weeks, though now he’s playing cornerback and not safety.

Even though he’s had some good plays - he had two interceptions in the regular-season finale against Buffalo, bringing one back for a touchdown - Moore felt like the Ravens would be looking for him.

“I felt like going into the game they were going to target me, you know, undrafted rookie, bounced around practice squad, etc., etc., moved from safety to corner. I always feel like, with my background, there’s a target on me,’’ Moore said.

But in the biggest moments, Moore came up with the plays of the day.

It’s not to the same extent - fortunately for the Patriots - but Rob Gronkowski feels Tom Brady’s pain. The tight end was injured late in the third quarter when his left ankle was landed on by Bernard Pollard, the same player who caused Brady’s season-ending knee injury in 2008, when he played for Kansas City. Also Pollard, then with the Texans, was also the closest player to Wes Welker when the Patriots receiver tore his anterior cruciate ligament in the 2009 regular-season finale.

After being rolled into, Gronkowski limped off the field and was taken into the locker room. He returned in the fourth quarter, and was spotted on the field after the game wearing a protective boot. He caught five passes for 87 yards.

Now Gronkowski and anyone else who might need extra recovery time will get it, since there’s two weeks before the Super Bowl.

Kyle Arrington also left in the second quarter with an eye injury, and returned in the fourth quarter. Vince Wilfork briefly left the game and returned with a wrap on his left elbow.

Surrounded by television cameras and reporters in the postgame locker room, team owner Robert Kraft was handed a cellphone, glanced at the caller ID, and said simply, “It’s Elton.’’

Elton John was calling his good friend, extending his congratulations from Los Angeles.

The iconic singer, Kraft said, has been a family friend for more than 25 years.

“He always used to call, and he’d speak to my wife first, when we won Super Bowls,’’ Kraft said. “He’s never called for an AFC Championship.’’

Among the seven inactive players for the Patriots were receiver Chad Ochocinco and running back Stevan Ridley, who both were healthy scratches for the first time this season.

Ochocinco, who missed the game in Philadelphia Nov. 27 because of what the team called a hamstring injury, was on the field for just one offensive snap in the playoff win against Denver. He flew to Miami on Friday to attend his father’s funeral, but according to a league source, returned to New England in time for yesterday’s game. Ridley, a rookie from LSU, fumbled in two straight games, losing one last week against the Broncos.

Spikes said he had a dream about the AFC Championship game a few days before it was played.

“The outcome was sort of like this,’’ Spikes said.

Spikes intercepted Joe Flacco in the fourth quarter, the only turnover the Patriots forced. He also was a participant in a number of after-the-whistle scrums, but was never whistled for a penalty.

“You know how it is in the playoffs,’’ Spikes said. “The refs let us play a little bit, so you sort of play some mind games.’’

The Patriots lost the turnover battle for the second straight game. Brady had two interceptions, and Danny Woodhead fumbled a kickoff that was recovered by the Ravens.

Las Vegas made the Patriots an early 3-point favorite over the Giants for Super Bowl XVLI. The Giants defeated the Patriots, 24-20, Nov. 6, snapping New England’s 20-game home winning streak . . . Left tackle Matt Light, when asked what he did when Ravens kicker Billy Cundiff lined up for a game-tying field goal attempt: “I had my eyes closed, man. That’s a little too much stress for this guy.’’ . . . The four honorary Patriots captains - Drew Bledsoe, Tedy Bruschi, Ty Law, and Troy Brown - were introduced and took the field before the game to loud applause, then gathered at midfield, where they put on their blue numbered Patriots jerseys.