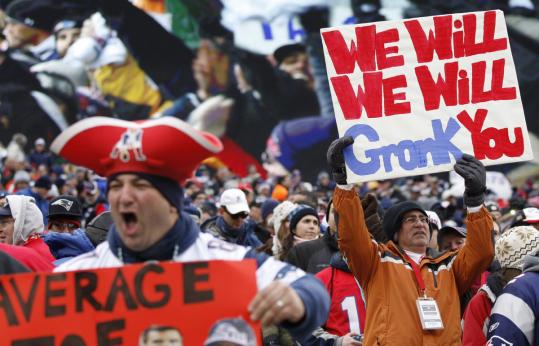 FOXBOROUGH - Feeling 10 years younger today? You should. Your Patriots are going to the Super Bowl and it feels just like 2001-02, when the stars aligned and the Patriots were unlikely kings of the NFL.

A decade ago, we had the Tuck Rule, snow angels, and a bunch of overachievers who redefined the word “team’’ and carried their magic to the Super Bowl in New Orleans.

Now the Patriots are blessed with a no-name defense, cosmic attrition of NFL superpowers, and the indomitable spirit of Myra H. Kraft, who died shortly before an unlikely season that ends Feb. 5 in Indianapolis against the same New York Giants who derailed New England’s historic 18-0 season on Feb. 3, 2008.

Making their own breaks, while accepting more gifts from the football gods, the Patriots defeated the Baltimore Ravens, 23-20, yesterday in the AFC Championship game at Gillette Stadium. It was a spectacular 60 minutes of football, not decided until a kicker from Harlan, Iowa, missed a 32-yard field goal with 11 seconds left on the clock. Thank you, Billy (Buckner) Cundiff.

Bingo, as Troy Brown would say. There were mistakes aplenty in the 2012 AFC Championship game, but you could watch it 10 more times without getting bored. It was a smorgasbord of hard hits, near misses, and big plays. Plus, the Angel of Myra.

“It wasn’t always perfect, but they fought to the final gun and we came out on top,’’ said Patriots coach/football historian Bill Belichick.

This will be Belichick’s fifth trip to the Super Bowl since taking over as head coach in 2000. Only Don Shula (six) has coached in more Super Bowls.

Patriots quarterback Tom Brady - Bill Russell to Belichick’s Red Auerbach - will be making his record-tying (John Elway) fifth start in the ultimate football game. Brady needs one more Super Bowl win to tie Terry Bradshaw and Joe Montana’s record (four). Yesterday’s victory was Brady’s 16th in the playoffs, tying him with Montana for most all time.

Belichick, Brady, and owner Bob Kraft are the constants in this 21st century NFL dynasty. In an era designed to make teams fall after they succeed, the Patriots have rewarded their fans annually, watching other rivals (Colts, Jets) fizzle and fail.

The 2011 Patriots were suspect in the first half of the regular season. They lost three of their first eight games, gave up more yardage than almost every NFL team, and came into January portrayed as paper tigers who might fold in the playoffs. Last weekend’s division-round rout of the ordinary Denver Broncos established the Patriots as favorites to return to the Super Bowl, but there was nothing easy about beating Baltimore.

It became clear early that the Ravens were not going to turtle and die in the face of the mighty Patriots and a loud Gillette sellout. The Ravens intercepted two Brady passes and forced Danny Woodhead to fumble on a kickoff.

The Patriots trailed, 20-16, after three quarters and didn’t take the lead for good until Brady extended the football over the goal line and vaulted over a pile of bodies for a 1-yard TD plunge with 11:29 left. This was big-boy football. Brady was speared in the kidneys by Ray Lewis after he scored, but just got up and went to the bench.

Baltimore had multiple chances to tie, and/or win. With his team down 3 with 2:53 left, facing fourth and 6 from the New England 33, Ravens coach John Harbaugh eschewed the 50-yard field goal attempt in favor of a pass play that went incomplete. Wilfork, a monstrous presence all day, was holding a piece of Joe Flacco when the Baltimore QB delivered the no-hope pass.

With a chance to end the game then and there, the Patriots went three-and-out, surrendering the ball to Baltimore for one last high-wire act.

It was a beauty.

Over and over again, the Patriots flirted with danger.

They allowed the Ravens to advance to the New England 14-yard line. They almost allowed a touchdown pass from Flacco to Lee Evans, but Evans didn’t have the ball quite long enough before it was knocked loose by Sterling Moore. By rule (absurd rule), the play was not reviewed.

Then Moore denied a pass to Dennis Pitta at the 3-yard line. Perhaps a mugging. Perhaps a great play. But there was no call. The clean-living Patriots - always an attraction for the league and the television networks - were flagged once in this game: 5 yards for having 12 men on the field on a PAT.

After those near misses, Harbaugh finally ordered a tying field goal attempt. Enter Cundiff. When the ball left his foot, Harbaugh grimaced and then slumped his shoulders.

“It was a kick I’ve probably kicked a thousand times,’’ said Buckner/Cundiff. “There’s really no excuse for it.’’

It was confetti time in Foxborough.

“Tonight was a big night for all of us,’’ said Wilfork. “The fans. The organization. The coaches. The players. Everyone.’’

Wilfork is one of the holdovers from the Patriots’ last Super Bowl victory in Jacksonville in 2005. He also was on the field in Glendale, Ariz., four years ago when the 18-0 Patriots were denied immortality, losing Super Bowl XLII to the New York Giants.

Now they are back in the big game, which means a chance for redemption and immortality for Messrs. Belichick and Brady - who have never fully recovered from the damage done in Glendale, Ariz., four years ago.

“I sucked pretty bad today, but our defense saved us,’’ said Brady (0 touchdown passes). “And I’m going to try to go out and do a better job in a couple weeks.’’

With the Celtics in sunset and the Red Sox making luxury-tax avoidance their top priority, it’s nice to have the Patriots poised to put the Duck Boats back on the streets of Boston.

Atop the temporary platform during the Lamar Hunt Trophy presentation, Kraft pointed to his noble team and said, “They’re a great brotherhood. They’re a family. And just like all of you out in the stadium - you’re part of our family. Thank you for all the support you’ve given us this emotional year.’’

A year that will end 13 days from now in Lucas Oil Stadium, a rematch of the game Which Must Not Be Named.