Hard running and a patchwork effort from Green-Ellis 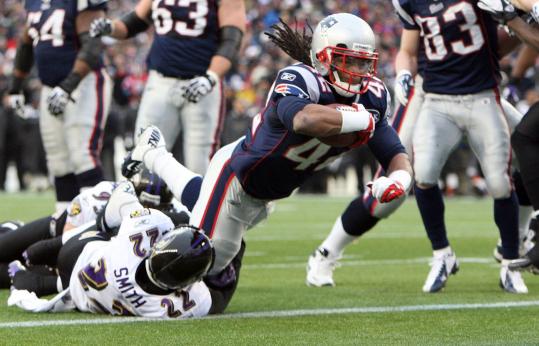 FOXBOROUGH - Robert Kraft stood surrounded by media in the Patriots locker room following yesterday’s 23-20 victory over the Ravens in the AFC Championship game.

The Patriots owner had the Lamar Hunt Trophy cradled in his left arm. His right arm was draped around the shoulder of his 15-year-old grandson, Harry, whose job it seemed was to tether his emotionally drained grandfather and keep him from floating away amid the jubilation after the Patriots advanced to their seventh Super Bowl and sixth of the Kraft Era.

He was asked about the touching gesture he made to his late wife, Myra, during the trophy presentation.

Just as BenJarvus Green-Ellis had done when he powered his way into the end zone on a 7-yard second-quarter run to give the Patriots a 10-3 lead and paid homage to the organization’s matriarch - tapping the MHK patch on the left side of his jersey and blowing a kiss to the heavens - Kraft twice tapped the MHK pin on his lapel, and blew a kiss to the heavens.

Asked if he was imitating Green-Ellis’s gesture, Kraft was momentarily stunned.

“I didn’t know he did that? Oh, he did?’’ Kraft said. “I missed it. I was talking to Steven Tyler, he was distracting.’’

The small clutch of reporters broke into laughter.

“Really? Holy mackerel, honest-to-goodness, I didn’t see it,’’ Kraft said, turning to his grandson for confirmation.

Harry nodded in the affirmative. “Oh, I love him even more,’’ Kraft said of Green-Ellis. “I’m going to give him a kiss.’’

The crowd of 68,756 at Gillette Stadium probably wanted to join their owner in giving Green-Ellis a smooch after the powerfully built running back rushed 15 times for 68 yards and the first postseason touchdown of his career.

And he celebrated the same way he had on all 11 of his touchdowns during the regular season.

“You know it’s been a trying year for Mr. Kraft and his family,’’ said Green-Ellis. “She meant so much to this organization and we wanted to get that for her.’’

Myra Kraft’s spiritual presence was not to be overlooked or denied, especially when Ravens kicker Billy Cundiff missed wide left on a 32-yard field goal attempt that would have tied it with 11 seconds to go.

“We’ve had that patch on our jersey and you cannot help but think about her every game we play,’’ Green-Ellis said. “We just take our hats off to her.’’

Green-Ellis attacked a physical Ravens defense with a head-on, downhill running style. It was evident in the way he sparked New England’s 10-play, 75-yard scoring march with hard runs up the middle for gains of 13 and 11 yards.

“Anytime we can be productive in the run game, that’s a good day for us,’’ said right guard Brian Waters. “We know that teams are so concerned about how we throw the ball, and who we’re throwing the ball to, that we almost feel a little bit taken for granted that we’re still able to produce in the run game.

Green-Ellis accounted for 43 of the 75 yards the Patriots gained on that critical drive, even drawing an 8-yard facemask penalty from Dannell Ellerbe that gave New England a first-and-goal from the Ravens 7.

Ellerbe stripped Green-Ellis of his helmet as the running back lunged for a 1-yard gain. Lardarius Webb lowered his head and drew a bead on Green-Ellis, who escaped serious injury when he ducked and got to the ground quickly.

“I know I need my head to play football, so I got down when I saw him coming,’’ Green-Ellis said. “I’ve been playing football a long time. I’ve played without a helmet before playing pick-up tackle in the backyard, so it wasn’t anything new.’’

On the next play, Green-Ellis punched it in from 7 yards and paid his respects with a heartfelt gesture his owner missed, but sincerely appreciated.

It prompted Kraft to seek out Green-Ellis in the locker room.

“Someone said, ‘Are you copying Benny?’ and I didn’t even see you,’’ Kraft said as Green-Ellis roared.

Turning to the media gathered in front of Green-Ellis’s locker, Kraft said, “Sorry for interrupting you all. But how lucky are we to have this guy?’’

Then, holding up the gleaming Lamar Hunt Trophy so that Green-Ellis could admire it, Kraft said, “Do you like the old one better or this one?’’

That would be the best gesture of all.