Patriots headed back to Super Bowl 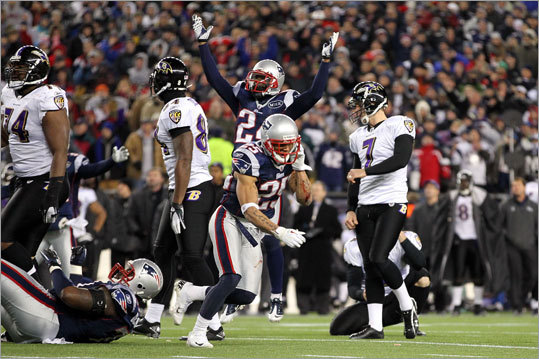 (Getty Images) The Patriots celebrated after Ravens kicker Billy Cundiff missed a field goal in the final seconds of the AFC Championship that could have tied the score.
By Shalise Manza Young Globe Staff / January 22, 2012
Text size – +

FOXBOROUGH – The New England Patriots are headed to the seventh Super Bowl in franchise history after a hard-fought, edge-of-your-seat, 23-20 win over the Baltimore Ravens in the AFC Championship game that was only sealed when Ravens kicker Billy Cundiff pulled a potentially game-tying 32-yard field goal with 11 seconds to play wide left.

The miss was jaw-dropping for Baltimore players, who stood on the sideline in disbelief and set off a wild celebration at Gillette Stadium. Patriots defensive tackle Vince Wilfork, who had a huge role in the game, took off his helmet, his arms outstretched, steam coming off his bald head and bare arms.

After being battered all season, the New England defense forced the Ravens’ field goal on the game's final possession. Rookie Sterling Moore, who earlier missed a tackle on Torrey Smith that led to a touchdown, bounced back mightily, breaking up two end zone pass attempts from Joe Flacco on the Ravens' final possession.

The snap and hold looked good for Cundiff’s kick, but he simply misfired from a manageable distance.

"All the credit has got to go to the players," Patriots coach Bill Belichick said. "Those guys fought for 60 minutes. It wasn’t perfect, but they went out there and they played their hearts out and sometimes good things happen when do that. "

As the Patriots waited to receive the Lamar Hunt Trophy given to the AFC Champions, signs honoring team owner Robert Kraft’s wife Myra, who died on July 20, were everywhere, from the patches on players’ jerseys, to the signs in the stands from fans who waved giant “MHK” and “Win it for Myra” posters.

"I want to congratulate these great players and the coaches. They’re an amazing team. They’re a great brotherhood," Kraft said in a television interview after the game. "They’re a family. And just like all of you out in the stadium – you’re part of our family. All of you and all of the people watching on television who are Pats fans – you’re part of our family. Thank you for the support you’ve given us this emotional year."

Patriots quarterback Tom Brady plunged one yard over the goal line on fourth-and-goal in the fourth quarter to put New England on top, 23-20. Brady completed only 22 of 36 passes for 239 yards and no touchdowns, and harshly criticized his performance in a television interview afterward.

"Well, I sucked pretty bad today, but our defense saved us," Brady said. "And I’m going to try and go out and do a better job in a couples week, but I’m proud of this team, my teammates. You know, you fans were unbelievable today. You were a 12th man and we needed it. We’re going to try to go out and kick some butt in a couple weeks."

The Patriots will make their seventh appearance in the Super Bowl, and first since losing to the Giants in Super Bowl XLII, the only defeat the Patriots had following a 16-0 regular season in 2007.

Super Bowl XLVI is Feb. 5 in Indianapolis. The Patriots will face the Giants once again.

Flacco had pulled the Ravens ahead, 20-16, when he hit Smith on a 29-yard pass play that Smith ended by diving for the pylon. Flacco was 22-for-36 for 306 yards and two touchdowns.

In the first half, the game was as tight as it was expected it would be, though New England may have squandered some early chances. The Patriots went into the locker room up 13-10 – they had the ball with just under a minute to play and with two timeouts in hand, but opted to take two knees rather than try to get more points.

The early opportunities came on the Pats’ first three possessions: New England started at their own 40, own 39 and own 40, but was only able to score three points despite the short fields.

In the opening minutes, the Patriots’ defense was the story, as it came out strong. Baltimore lost the coin toss but the Patriots, as is their custom, elected to defer, and forced a three-and-out, with Mark Anderson bringing Flacco down from behind when he tucked the ball on third down and tried to run for it.

On Baltimore’s second possession, it faced a third-and-3, but Vince Wilfork pressured Flacco and Anderson took him down for a seven-yard sack.

Wilfork came up huge the next time the Ravens had the ball, bringing Ricky Williams down by his jersey – while Wilfork himself was on the ground – for a five-yard loss, and then abused center Matt Birk on third-and-long, getting a five-yard sack of Flacco and forcing another punt.

After a quick three-and-out, the first time they got the ball, the Patriots offense was more effective the second time out, getting some luck along the way. On second-and-9 from the Baltimore 27, Brady looked for Wes Welker. The ball was high, and Welker batted it up; Bernard Pollard grabbed the ball out of the air, but the interception came off the board because cornerback Lardarius Webb was flagged for illegal contact. New England kept the ball and got a first down.

Six plays later – after Brady overthrew tight end Rob Gronkowski, who was wide-open, in the seam for what would have been a touchdown -- Stephen Gostkowski put a 29-yard field goal through the uprights for the first points of the game.

While the first potential interception was wiped out by a penalty, the Patriots weren’t so lucky the second time. After Wilfork’s sack led to a Ravens punt, Brady’s pass for Julian Edelman ended up in the hands of Webb, who made a great catch falling backward, similar to an interception think Patriots cornerback Devin McCourty made in San Diego last season.

Baltimore tied the score off the turnover, with a 42-yard pass from Flacco to rookie Smith on the first play putting the offense into New England territory quickly. When a third-down dumpoff to Anquan Boldin was just short of a first down, the Ravens took a short field goal.

The Patriots responded with something and someone we haven’t seen much of recently: the ground game and BenJarvus Green-Ellis. The running back picked up 24 yards on the first two plays from scrimmage, then later in the drive saw his helmet yanked off while he was running by linebacker Dennell Ellerbe.

The penalty gave the Pats first-and-goal from the 7; on the next play, Brady went right back to Green-Ellis, who got some nice blocks from Logan Mankins and Welker on his way to the touchdown.

The Ravens once again tied the game, getting two big plays: on first down, old foe Lee Evans, who is in his first season with Baltimore after beginning his career with the Bills, had a 20-yard gain; two plays later, Boldin broke through the tackle of Kyle Arrington and ended up gaining 37 yards.

Flacco hit tight end Dennis Pitta in the front of the end zone for the score.

The Patriots added a 35-yard field goal before halftime, then upped their lead to six points just off the half on another short field goal.

Two key plays on the drive came when Brady picked up four yards on second-and-1, getting up and barking at linebacker Ray Lewis, and on third-and-6, when Aaron Hernandez caught a screen behind the line of scrimmage and put a nice move on Pollard for a 12-yard gain.

But the Ravens answered right back, going 78 yards in 11 plays for their first lead of the game, then getting the ball right back when Danny Woodhead was stripped on the ensuing kickoff return. The New England defense made a big stop, with McCourty breaking up a pass in the end zone and James Ihedigbo sacking Flacco on third down to force a field goal.