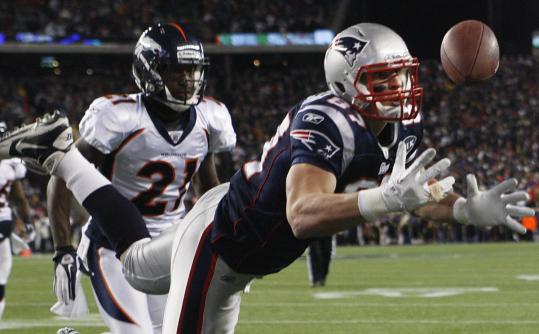 FOXBOROUGH - Route One was Easy Street. Foxborough was The Big Easy. Everybody at Gillette had that Peaceful, Easy Feeling. The game could have been dedicated to the late Easy Ed Macauley.

Winning their first playoff game in four years, the Patriots annihilated the Denver Broncos, 45-10, at frosty Gillette Stadium last night. It was a beating of - dare we say - biblical proportions.

Tom Brady threw for six touchdown passes, Rob Gronkowski caught three TDs, and the Patriots advanced to the AFC Championship game a week from today back at Gillette. A win next week puts the Patriots in Super Bowl XLVI in Indianapolis Feb. 5, which would be a chance for ultimate redemption for Bill Belichick and Tom Brady.

“It’s all about winning,’’ said Brady. “You lose a few playoff games and it’s a bitter way to end a season. It sits on your mind for quite a while. Now we’ve got eight days to get ready for the biggest game of the year.’’

“What a great time to put it together,’’ added defensive lineman Vince Wilfork, one of the few holdovers from the golden years. “We’re just playing good football all around. We’re getting better every week. Hopefully, it won’t stop now.’’

It’s been popular to denigrate the Patriots because of the caliber of their opponents, and the dismal Broncos did nothing to dispute the notion that the Patriots are beneficiaries of the easiest schedule in NFL history. The Patriots are believed to be the first NFL team to advance to the conference championship without defeating a team with a regular-season record over .500.

But maybe it’s time to start thinking of the Patriots another way. Maybe New England’s team is the best team in the NFL. Maybe a 45-10 playoff victory is pretty darned impressive.

Last night’s slaughter was much worse than the final score indicated. It was 35-7 at halftime and 42-7 early in the third quarter. The entire second half was a glorified scrimmage. Just don’t get hurt.

Brady completed 26 of 34 passes for 363 yards and a playoff-record-tying six TD strikes. His counterpart, the much-hyped Tim Tebow, completed 9 of 26 passes for 136 yards, rushed for a paltry 13 yards, and was sacked five times. Representatives of Time Magazine, People, GQ, and The New Yorker had seats in the press box and none of them came to write about Rob Ninkovich, but the Tebow story line never materialized. It was vaporized by Belichick.

“I can’t say enough about our players,’’ said Belichick. “They were obviously ready to go today. We got contributions from everybody. It was a good solid team effort. We’ll enjoy this for a little while and then find out who we play in the AFC Championship game. It’s an honor to be in it.’’

The Patriots will play the winner of today’s Baltimore-Houston game. The 12-4 Ravens figure to be the more difficult opponent. Given the way things have gone for the Patriots this season, the likely scenario would have the Texans beating the Ravens but losing nine starters in the process.

The Steelers must have been asking themselves, “How did we lose to the Broncos?’’ when they watched Denver stumbling all over the Gillette turf last night.

Denver won the coin toss, which was coach John Fox’s only victory of the night. Denver opted to kick off to the Patriots, which backfired when the hosts roared down the field in less than two minutes, taking a 7-0 lead on Brady’s 7-yard touchdown pass to Wes Welker.

The Broncos told us all week they planned to do better than they did Dec. 18 when they fumbled three times in a 41-23 loss to the Patriots. They did not do better. Tebow coughed up the football on Denver’s sixth play from scrimmage and the Patriots, naturally, turned it into another touchdown (Gronk’s first spike-inducing score) and a 14-0 lead with 6:42 still remaining in the first quarter.

The Broncos’ only shot came when they turned a Brady interception (his only mistake of the night) into 24-yard touchdown drive. When Willis McGahee rumbled 5 yards into the end zone, it was a 14-7 game and there was hope back home in the Rockies.

It was short-lived. The Broncos hurt themselves with a stupid unnecessary roughness penalty, couldn’t dig out of brutal field position, and soon trailed, 21-7. When the Patriots struck for two more touchdowns before intermission, it was time to abandon those red suite seats and come in from the cold.

It was a bad night for Fox. The Denver coach looks like Grady Little and played into New England’s hands. He tried to stop Brady with coverage, instead of pressure, and Brady carved up the Broncos with surgical perfection. In homage to conservative nitwit coaches across the universe, Fox sent his placekicker onto the field for a 41-yard field goal while trailing, 42-7, with 6:16 left in the third quarter.

Speaking of mercy, Belichick showed little. Coach Hoodie had the Patriots in hurry-up mode with a 35-7 lead in the third and went for a field goal with a 42-10 lead in the fourth. Brady showed us his punting skills, booting a 48-yarder in the final quarter.

The Patriots can’t be faulted for beating the teams they’ve been asked to beat. You can’t do much better than 45-10 in a playoff game.