Brady out of practice 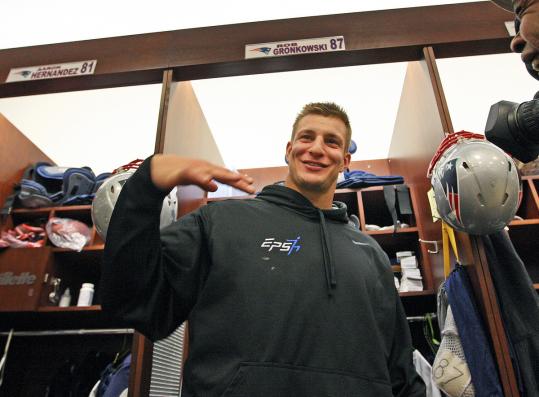 Rob Gronkowski has reason to be smiling, having been named to the Pro Bowl for the first time. (Jim Davis/Globe Staff)
By Julian Benbow Globe Staff / December 29, 2011
Text size – +

FOXBOROUGH - Although Tom Brady was listed as missing practice yesterday for non-injury-related reasons, he had X-rays done to check for a separated left shoulder, according to Tom Curran of Comcast SportsNet New England.

Brady ran three quarterback sneaks - and scored two touchdowns - in the Patriots’ 27-24 win over the Dolphins Saturday, but he may have injured his shoulder on his lone touchdown throw, a 1-yard pass to Deion Branch in the third quarter.

After letting the ball go, Brady took a hit from Dolphins linebacker Cameron Wake and was driven shoulder-first into the ground. He was favoring the shoulder after the play, but finished the game and led the Patriots to the come-from-behind win.

Brady was named to his seventh Pro Bowl this week and honored as AFC Offensive Player of the Week, but as he prepares for Sunday’s matchup with Buffalo, he is more concerned with cleaning up some of the miscues from his first meeting with the Bills, when he threw four interceptions and the Patriots lost, 34-31, despite being up, 21-0.

“We had some great opportunities,’’ Brady said. “We had a pretty good lead there in the second quarter and we turned the ball over right before halftime. That really hurt us.

“They’ve really done a great job scoring points off turnovers and getting a bunch of turnovers.

“They certainly take advantage of bad offensive football, which certainly we did a lot of that in the first game. I think it was just a very frustrating day because we didn’t play to the level of our expectations and they took advantage of it.

“They have some very skilled players, and if you make a mistake, they’re ready to capitalize, especially the guys in the secondary. Hopefully, there’s no repeat performance.’’

When Bill Belichick asked to see Matthew Slater Tuesday night, Slater hoped he wasn’t getting called into the principal’s office.

“I was a little worried at first, because you don’t want to get called into his office,’’ Slater said.

“He kind of had a little smirk on his face,’’ said Slater.

But the news Belichick was sitting on was good. After four seasons grinding between wide receiver, safety, and special teams, Slater was rewarded. He was one of eight Patriots named to the Pro Bowl, the first appearance for the 28-year-old.

“It was very humbling,’’ Slater said. “I’m very thankful for the honor.

Tight end Rob Gronkowski also received his first nod, and he, too, had to double-check when he was summoned to Belichick’s office.

“I asked real quick if it was anything bad,’’ Gronkowski said.

Offensive lineman Brian Waters was selected for the sixth time - the first as a Patriot.

“It never gets old,’’ Waters said. “You definitely set particular goals for yourself, you want to play good football and feel like you’re doing a good job at your position, always want to be considered one of the best, or something like that.’’

For the Slater family, this makes eight Pro Bowl selections. Slater’s Hall of Fame father, Jackie Slater, was a seven-time selection as an offensive lineman.

“You would have thought he made the Pro Bowl the way he was acting,’’ Matthew Slater said. “He was extremely proud.’’

For Slater, the journey from fringe player to special teams captain made him appreciate the honor more.

He still remembers a late-season matchup with the Steelers in his rookie year when he filled in for Ellis Hobbs and fumbled a kickoff in the third quarter that set up a Pittsburgh touchdown. The Patriots went on to lose, 33-10.

“Through it all, I just sort of kept my head down and kept working,’’ Slater said. “It’s even moreso humbling. I thank the lord and savior Jesus Christ because it’s been a long journey. He’s brought me a long ways, a lot of adversity from my rookie year to this point.’’

His role is still to be determined, and after 16 weeks of sitting by the phone, he is now learning the Patriots system on the fly. But newly signed fullback Lousaka Polite said he is ready to dive in.

“It’s been a long 16 weeks, but I’m ready to learn as much as I can and contribute wherever they want me to,’’ said Polite, a seven-year veteran who started the year in Dolphins training camp but was released Sept. 3.

“You just never know, as the weeks go by, you just don’t know what’s going to happen, and there’s always a little tiny bit of doubt because you don’t know what to expect. But you just stay ready, stay in shape, and luckily I got the call.’’

He acknowledged that the fullback position is going the way of the typewriter.

“The game is always evolving,’’ he said. “Things happen. Fullback’s kind of a dinosaur position, I guess you could say. But as long as I’m healthy and I’m here, I’m going to do my best to stick around.’’