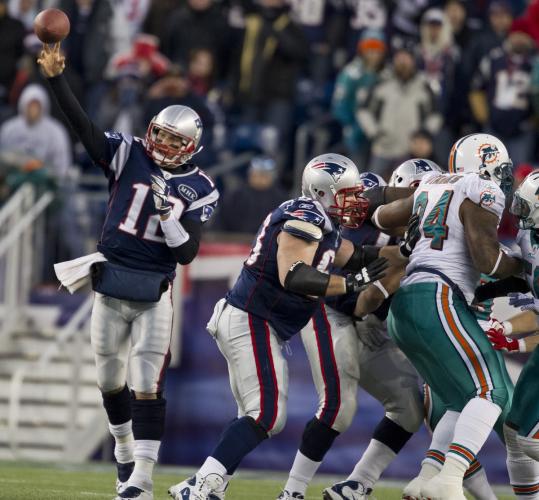 In the second half, Tom Brady had more time to do things, such as this game-clinching completion to Wes Welker. (Matthew J. Lee/Globe Staff)
By Greg A. Bedard December 27, 2011
Text size – +

In the victory over the Broncos, it was defensive coordinator Matt Patricia who made the right adjustments to change the course of his ravaged unit.

Against the Dolphins, it was offensive coordinator Bill O’Brien’s turn.

The Patriots obviously did not expect the Dolphins to blitz quarterback Tom Brady mercilessly in Saturday’s game.

Why should they have? In the season opener, Dolphins defensive coordinator Mike Nolan only sent more than four pass rushers seven times.

Nolan blitzed the Patriots 15 times in the 2010 season finale, but that was with Brian Hoyer at the helm most of the game.

In the first matchup in ’10, Nolan blitzed Brady four times.

In the previous two battles against Brady and the Patriots, Nolan sent an extra pass rusher a total of 11 times.

On Saturday, Nolan matched that number with 5:41 remaining in the second quarter.

By the end of the first half, Nolan had blitzed Brady on 14 of his 22 dropbacks, including seven heavy blitzes of six players or more.

Nolan didn’t change his game plan once Matt Light was ruled inactive before the game. With nothing to play for, Nolan was coming after Brady whether Light was in the lineup or not.

Obviously, the Patriots didn’t handle the pressure well, and that includes Brady.

The Patriots trailed, 17-0, Brady had completed just seven passes on 22 dropbacks, and averaged 5.1 yards per attempt.

They were, in a word, inept.

But O’Brien and Brady have to be credited for changing course at halftime.

O’Brien saw what the Dolphins were doing and decided to make things easier on his quarterback.

In the first half, the Patriots ran just two plays with zero running backs on the field, and six with an empty set (no backs or receivers lined up next to Brady).

The Patriots ran the first five plays of the second half with no backs on the field and an empty set.

By the end of the second half, the Patriots had run 18 plays with no running backs, and 20 empty sets.

That adjustment spread the Dolphins out more so Brady could tell where the blitzes were coming from. It also allowed the beat-up line to get a better idea of where the threats loomed.

That helped Brady carry out the second big adjustment: getting rid of the ball quicker.

Against 13 blitzes in the first half, Brady held the ball an average of 2.24 seconds. He was sacked twice, hurried three times, and knocked down twice for seven total quarterback pressures.

In the second half, against 17 blitzes (only one of six rushers), Brady was hurried once and knocked down twice. Against those blitzes, Brady’s release time was 2.04 seconds. That’s an eternity for an offensive line.

Armed with a better plan, Brady completed 20 of 27 passes for 217 yards (8.04 yards per attempt) as the Patriots scored 27 straight points to pull off their biggest come-from-behind victory since 2002.

Here are the positional ratings against the Dolphins.

The Patriots just weren’t ready for the pressure onslaught by the Dolphins, and that’s not on Brady. His performance early will only embolden defensive coordinators. It was right by the book: bang him early, he becomes unsure of his reads and he doesn’t see the game as clearly. He missed at least four open receivers in the first half, instead throwing into traffic. Brady must have gotten an earful at halftime because his first throw of the second half, a 22-yard laser to Rob Gronkowski in a small opening in zone coverage, was vintage Brady.

Running backs Rating: 4 out of 5

Pass protection from the running backs was so bad in the first half the Patriots took them off the field in the second. Danny Woodhead is going to have trouble with some matchups because of size, but on the first sack he doubled on Logan Mankins’s man (in what should have been a penalty for a chop block) and let safety Yeremiah Bell go through. BenJarvus Green-Ellis also allowed a knockdown in the first half. We’re seeing a changing of the guard at running back. Rookie Stevan Ridley is starting to get the carries Green-Ellis usually does late in games. Why shouldn’t he? Ridley takes care of the ball and he has stopped moving side to side. He broke three tackles, in which he picked up another 27 yards (42 percent of his 64 yards on the ground). With 3:10 left in the third quarter, Ridley bailed Gronkowski out on a poor run block when Ridley broke the shoestring tackle of end Phillip Merling 2 yards behind the line and picked up another 7 yards. Ridley followed that up with another 4 yards after contact with a run to the 1 by breaking the tackle of linebacker Karlos Dansby.

Two drops (Wes Welker, Aaron Hernandez) and three penalties (Hernandez two, Chad Ochocinco) marred an otherwise good outing. Welker was terrific once again with four tough catches and two great routes against tough man-to-man coverage. Gronkowski and Hernandez had as many poor run blocks as good ones. Gronkowski is almost impossible to take down in the open field. His 9-yard reception while breaking three tackles when the Patriots were backed up at the 2 was a big play that takes the life out of a defense. Deion Branch didn’t run out of bounds near the end of the first half, a decision that cost the Patriots time and some yardage before Stephen Gostkowski missed a 51-yard field goal. For the second time this season, Ochocinco covered up the tight end leading to a penalty. His lone catch was terrific.

If you’re grading on a curve, this wasn’t a bad outing considering the line was playing without three starters. But they did allow three sacks (two by Nate Solder), seven hurries (two from Brian Waters, 1 1/2 each from Dan Connolly and Marcus Cannon), two knockdowns, and four stuffed runs (those of 1 yard or less outside short yardage). Waters, who allowed 1 1/2 stuffs, was obviously trying to keep the group together and he did an admirable job even though his own performance wasn’t stellar. Cannon showed a lot of promise; it was evident he can handle a lot of stuff thrown at him. As soon as he gets an offseason under his belt, that is going to be a huge asset. Donald Thomas was decent. The greatest compliment you can give the members of the line is they held their own. No one was dominated. And considering how far down the depth chart the Patriots were, that is saying something. Other teams would have been run over.

Defensive line Rating: 3 out of 5

This unit was up and down against a Dolphins line that isn’t very good, especially with left tackle Jake Long only able to go 17 snaps before leaving with an injury. Shaun Ellis contributed in his 44 snaps (most since Week 2) with a sack and two stuffed runs. Ellis definitely worked the matchups. His sack came against puny H-back Charles Clay, a rookie. He had a run stuff against undrafted rookie Will Yeatman, who was in camp with the Patriots and performed about the same as he did here. The Dolphins showed why they’re 5-10 when in the span of four plays early in the second half. Quarterback Matt Moore fumbled the snap from center, held the ball for 4.51 seconds, took a 10-yard sack by Brandon Deaderick, and then the right tackle failed to block Rob Ninkovich on his sack. A looming problem is more gap and containment issues against the run. It’s not improving, especially with Vince Wilfork getting more double teams now that Andre Carter is out for the season.

Linebackers Rating: 3 out of 5

There was a lot of good play, mostly from Dane Fletcher, and some not so good play against the run. Jerod Mayo had a big sack when the Dolphins didn’t block him late, but outside of that, Mayo didn’t do much and had a big hand in why Reggie Bush kept gashing the Patriots with cutbacks. The Patriots are going to have to be a lot better against the run in the postseason. It’s every bit as poor as the pass defense right now. Fletcher is hitting a lot more than he’s missing the more he plays. Fletcher made a terrific play on Bush’s 4-yard loss with 12:20 left in the second quarter. He read the power run perfectly and stuck his nose in. Great read by Ninkovich on the throwback to the quarterback, but not good tackling. Moore escaped the sack - and a penalty - when he threw the ball away.

The ups and downs for Devin McCourty continue. On Brian Hartline’s 39-yard gain on the opening possession, McCourty bit on a double move and was roasted on third and 9. That also happened late in the game against Brandon Marshall. On Marshall’s 47-yard catch, McCourty was in position but he did not turn around for the ball. Can’t make a play if you don’t see the ball. Shades of the Redskins game when McCourty had another careless pass interference penalty on third-and-long. It’s debatable whether the pass over Hartline’s head was catchable, but McCourty shouldn’t be putting the officials in that spot with a blatant grab for a penalty.

McCourty really has a tough time in man coverage, but he did have four pass breakups (two dropped by Marshall), although the interception was an underthrown gift from Moore. On Marshall’s 19-yard touchdown, he went in motion, which kept Kyle Arrington from getting a jam. Arrington tried to hold up Marshall down the field, but he’s too strong. Would like to see Sergio Brown be a little more helpful. Brown later got yanked for Ross Ventrone near the end of the third quarter when he tackled the turf instead of Bush on an 8-yard run. Brown didn’t even come close to Bush. Five of the team’s 10 missed tackles came from this group, with two each from Arrington and James Ihedigbo.

Special teams Rating: 4 out of 5

The Patriots clearly won the battle, even with Gostkowski’s miss and Gostkowski having to make a possible touchdown-saving tackle on a kickoff. Upon further review, Brown and Woodhead also would have had a chance to bring down Clyde Gates. Even with one poor punt (3.28 seconds of hang time with a 25-yard bounce), Zoltan Mesko beat the Dolphins’ Brandon Fields by TKO. Mesko averaged 4.35 seconds of hang time. Fields was at 3.8 and got worse as the pressure intensified. Niko Koutouvides continues to do a nice job in coverage. Gostkowski is showing no fatigue in his leg with a 4.24-second average hang time on kickoffs.

Greg A. Bedard can be reached at gbedard@globe.com. 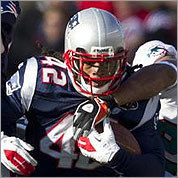