Rookie running back aided Patriots’ cause

Rookie running back Stevan Ridley had a season- and team-high 13 carries against the Dolphins Saturday, the second straight week he led the Patriots in rushing attempts.

Ridley totaled 64 yards, nearly all of them coming in the second half - a recurring theme in the game for the New England offense - and his final carry, an 18-yard scamper, gave the Patriots the first down they needed to kill the clock and seal the 27-24 win.

The third-round pick out of Louisiana State impressed teammates and coach Bill Belichick.

“He’s a great runner,’’ said offensive lineman Donald Thomas, who made his first start as a Patriot. “Young, energetic, is going to fight for those yards.

“As you saw, once he gets going, once he gets that little head bobbing, trying to get the crowd going, you know he’s going to run real good. You just have to get on your guy; he’ll make guys miss for you.

“When his number’s called, he’s ready to go, and I think that he really showed up. He did a great job.’’

Center Dan Connolly added, “He’s a good running back. He’s a hard worker and we trust that he’s going to do a good job when we need him.’’

In general, Danny Woodhead is the running back who gets the bulk of the work when New England switches to the no-huddle offense. But as the Patriots made their comeback against Miami, Ridley was frequently the one on the field.

In the first half, he had only two carries for 4 yards, but in the second, he had 11 for 60 yards. For the day, Ridley averaged 4.9 yards per attempt, which is right in line with his number for the season.

A week earlier in Denver, Ridley had 11 carries for 65 yards, which is nearly 6 yards per carry. His best game was against the Raiders, when he had 97 yards on just 10 rushes, including a 33-yard touchdown.

“I think he’s doing everything he possibly can to help the team,’’ said receiver Deion Branch. “That’s one position that [requires] you to get in a groove. He has to get in synch with the front line and they have to get in synch with him. We shuffle so many guys [at running back], but when he gets the opportunity, he takes advantage of it.’’

On Saturday, six players registered carries, including Aaron Hernandez, Wes Welker, and Tom Brady, who had two rushing touchdowns in a game for the first time since 2007. Woodhead’s four carries all came in the first quarter; BenJarvus Green-Ellis had just three in the game.

New England drafted two running backs last April, with Shane Vereen taken in the second round and Ridley in the third. Vereen has struggled with a hamstring injury much of the season, and with Kevin Faulk on the physically unable to perform list for the first six weeks, Ridley got his chance as the third running back.

He has had ups and downs, as all rookies do. One of the biggest lessons for young backs is pass protection. Against Miami, with several changes on the offensive line, the running backs didn’t help with Brady’s protection early on.

But Ridley did have one nice early blitz pickup; on the next play, third and long, Woodhead whiffed on a safety blitz, Brady was sacked, and New England had to punt.

Asked about Ridley’s performance against the Dolphins, Belichick gave him a nice compliment.

“I think Stevan has run well for us all year,’’ he said. “He had really a couple of strong runs, ran through a couple of tackles.

“There are still a lot of things he could do better, but he made some plays and there are other plays that could have been better.

“But he runs hard with the ball.’’ 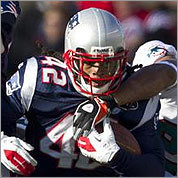