Hernandez gets help growing up 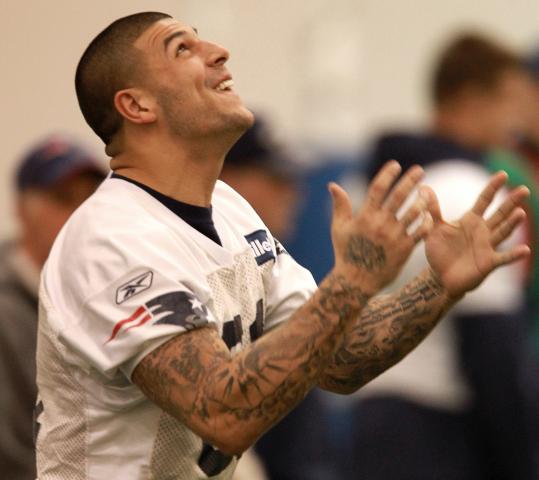 FOXBOROUGH - Most days, Aaron Hernandez goes through the many tasks all football players must attend to, his focus on practice or the weight room or film study.

But there are days when he realizes if he turns around he’ll be looking at Tom Brady and Deion Branch, players who, not so long ago, he watched on television while growing up in Bristol, Conn.

“Honestly, sometimes I sit back and think about it - it is definitely a dream come true,’’ Hernandez said yesterday. “I’m playing with a lot of the players that I watched, like Deion Branch, Wes Welker, Tom Brady, so it’s definitely an honor playing with them. Some days I walk around here like it’s normal, but other days I’m like, ‘Wow, it’s an honor.’ ’’

The road to get here - a budding young star in the NFL, one half of the best tight end tandem in the league - had its share of bumps for the 22-year-old Hernandez, some of them, he’ll admit, he created.

Yet something else he’ll admit is that he wouldn’t have made it this far without his older brother, D.J.

“He’s always in my ear telling me what I need to do, what I don’t need to be doing,’’ Aaron said. “I was one of those kids that always did my own thing and it wasn’t always the best decisions, especially when my father passed away. So [D.J.] was always there for me and he was the one that gave me my work ethic because always watching him work hard and succeed. I always wanted to succeed, so I always wanted to follow his role.’’

In January 2006, their father, Dennis, died from complications after hernia surgery. Dennis Hernandez was only 49, and like his sons, was a star high school player in Bristol. He went on to play at UConn.

Aaron was only 16 when he passed, D.J. was 19 and had begun his own college career with the Huskies.

Their father’s death hit the close-knit family hard, and rocked Aaron in particular. He began to act out. “Just not making a lot of smart decisions,’’ he said, blowing off school work or cutting corners in football, until D.J. stepped in and helped Aaron get back on track.

The brothers were already close, their bond forged over highly competitive games of one-on-one basketball in the backyard (or anything else they could compete against one another in), and they’ve grown closer in the years since.

D.J. and Aaron got to play together at Bristol Central High for one year, when D.J. was a senior. His first pass that season was a touchdown to his baby brother.

Back then, Aaron was all potential in an awkward body.

“He was one of those guys who was - you saw talent, but he just didn’t really grow into his body,’’ D.J. said from the football offices at Brown University, where he just completed his first season as quarterbacks coach. “He was a taller, skinny kid with a size 13, 14 shoe and I just called him a big goof.

“I didn’t see him play much his sophomore year because I was playing at UConn, and then I come back his junior year and I couldn’t keep my eyes off him on the field. It was just something special to see him out there.’’

Aaron was special. In his final season at Bristol Central not only was he the Gatorade Connecticut player of the year, he established a national high school record for receiving yards per game (180.7) and set state single-season records for receiving yards (1,807) and touchdowns (24), and was rated as either the best or second-best tight end prospect in the country.

(The player ranked just ahead or behind Hernandez? Rob Gronkowski.)

Initially, Hernandez chose to follow in the footsteps of his father and brother and play at UConn, but the University of Florida came calling and he opted to play for the Gators.

He continued to excel on the field, becoming the first SEC player to win the Mackey Award as the nation’s top tight end, but off the field he still had problems. The Globe reported after he was drafted that Hernandez failed multiple drug tests at Florida; in a statement, Hernandez said he failed one.

He slid in the draft, and was there in the fourth round for the Patriots to select him. New England had chosen Gronkowski in the second round.

Coming off a career game in Denver last week (9 catches, 129 yards, 1 TD), Hernandez has surpassed his impressive rookie numbers. With two games to play, he has 68 receptions for 736 yards and six touchdowns.

Both he and Gronkowski have endeared themselves to Brady, both on and off the field. Brady affectionately says Hernandez is like a little brother, and the quarterback will easily discuss the development of the two tight ends, who have become an integral part of the offense.

Brady mentioned this week that Hernandez has learned from the veterans and is taking better care of himself. D.J. saw that firsthand on a recent visit, and knows it’s part of his brother’s continued growth.

“The thing people forget is last year he’s 21 years old and as mature as he thinks he is’’ - D.J. said, with laughter in his voice - “and as wise as he is, he’s young.

“I think just being around those guys, being around that coaching staff, has allowed him to grow and mature and I think he really understands how physical and how demanding the game is. In order for him to be playing for a while like he plans on, he needs to continue to take care of his body because that’s part of the game as well.’’

Aaron and D.J. talk almost every day, despite the demands of their respective teams. They talk about X’s and O’s, game plans, and opponents, but they also still talk about adversity and coming through it, and life.

“I listened at times, didn’t listen at times, but he was definitely there for me,’’ Aaron said. “He’s actually one of the main reasons I am where I am today.’’