For the Gator glory, it’s Hernandez this time 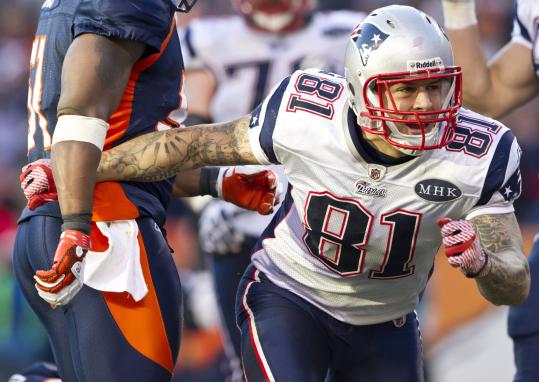 DENVER - The fact that a Florida Gator played a key role in determining the outcome of yesterday’s Patriots-Broncos game was not surprising. That it was Aaron Hernandez, and not Tim Tebow, might be.

Hernandez enjoyed the best game of his two-year professional career, catching nine passes for 129 yards and a touchdown in a 41-23 win that gave the Patriots the AFC East title for the third straight season, and eight of the last nine.

The number of receptions and receiving yards are game bests for the 22-year-old tight end, and marks just the third time he’s topped 100 yards in 27 NFL games. It came on a day that began with Hernandez being completely overshadowed by his former college teammate, who had carried the Broncos to six straight wins.

“I just tried to get open and make some plays, and Tom [Brady] came to me and I tried to make some plays with it,’’ Hernandez said. “Every win is a great win, and knowing we’re division champs, it’s definitely an honor.’’

Hernandez was involved in the Patriots’ plans from the start, catching a short pass from Brady and taking it 46 yards on the team’s third play from scrimmage, which came on third and 9 and extended the opening drive. Two plays later the Patriots were in the end zone, and leading, 7-6.

While not in a slump, Hernandez had gone six games since his last touchdown. He ended that drought in the second quarter, on perhaps the Patriots’ most important drive of the game. Denver had built a 16-7 lead, scoring all three times it had the ball, but the Patriots answered with a 12-play, 80-yard march. It culminated with a 1-yard touchdown pass from Brady to Hernandez, cutting the deficit to 16-14. It began a string of 27 unanswered New England points.

Asked what prompted his career day, Hernandez pointed to a single cause: his positional colleague, Rob Gronkowski.

“The reason I had a big game is because they were probably more focused on him,’’ Hernandez said. “I don’t know why any team wouldn’t, he’s 6-6, 260, good speed. It just leaves me some opportunities to make some plays for the team.

“That’s one thing about us, we’re never really competing with each other because we see each other as one. We both work together, when he has a great game I’m happy for him, and when I have a great game I know he’s happy for me.’’

While Hernandez was going more than a month without finding the end zone, Gronkowski had 10 touchdowns over the past six games, at least one in every contest. That streak was snapped with yesterday’s four-catch, 53-yard effort, but if it allowed his teammate to get open and make plays, Gronkowski was perfectly fine with that.

“He came through huge for us,’’ Gronkowski said. “You never know who’s going to get all the yards in a game. You don’t know what the coverages are going to be, so that’s why everyone has to be ready. Anyone can have a big game any day.

“That’s how it always works. If they’re focused on me, well, Aaron’s a great player, you’ve got to focus on him, too. Sometimes they focus on him, which gets me open. It works great.’’

Hernandez had six catches in the first half. He thought he had a seventh - and his second touchdown - but referees ruled his attempt to bring in an end zone pass incomplete.

After the Broncos had cut their deficit to 34-23 with a touchdown in the fourth quarter - Tebow Time, as it’s come to be known - Hernandez had his final two catches on the Patriots’ final scoring drive. He had a 16-yard reception to push the ball to the Broncos 19, and after an offensive holding call nullified a short Hernandez catch, he took a Brady pass 22 yards to the 1, nearly scoring again. The ensuing touchdown run by BenJarvus Green-Ellis snuffed out any hope the Broncos had of pulling off a Tebow-led fourth-quarter comeback for the fifth straight game.

Almost all of the questions Hernandez faced in the week leading up to the game involved Tebow. The postgame focus was on his exploits, although he was asked if he had a chance to speak with his friend.

“Before the game and after the game,’’ Hernandez said. “I said I’m proud of him and he said he’s proud of me.’’