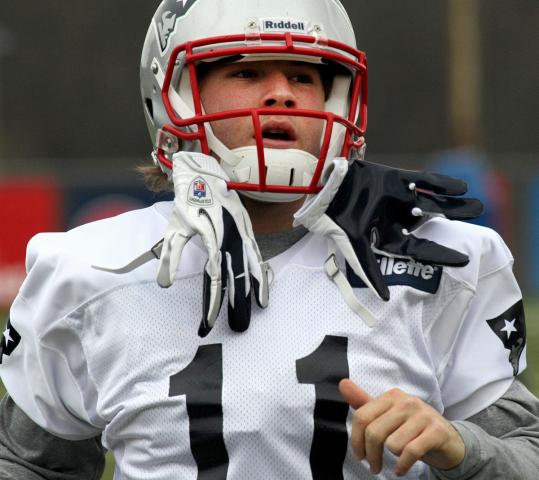 FOXBOROUGH - Prosecutors decided to drop charges against the Patriots’ Julian Edelman, who was arrested on Halloween night after allegedly groping a woman at a Boston nightclub.

Suffolk County prosecutors made the announcement yesterday, saying in a court filing withdrawing prosecution that they would not be able to meet their task of proving the charges beyond a reasonable doubt.

Edelman, 25, was arrested Nov. 1 after an incident at the Storyville nightclub, and charged with indecent assault and battery after he allegedly touched a woman inappropriately. His next scheduled court date was Jan. 10.

“After a thorough investigation of this case by the Boston Police Department’s Sexual Assault Unit . . . the Commonwealth has concluded that it would not be able to meet its burden at trial of proving each of the elements of indecent assault and battery beyond a reasonable doubt,’’ the filing read. “Specifically, a review of both witness statements and video surveillance has revealed that the Commonwealth would be unable to prove beyond a reasonable doubt that the defendant intentionally engaged in a harmful or offensive touching of the complainant that would be regarded by society as immodest, immoral, and improper.’’

According to the accuser, in a complaint she filed with police, Edelman approached her on the dance floor, reached under her Halloween costume, and grabbed her crotch. He was arrested at 1:30 a.m. outside the nightclub and appeared in Boston Municipal Court later that morning, where he entered a not guilty plea.

The accuser’s complaint said that a witness who was with the woman observed Edelman bump into her, then saw her face “change into an expression of shock.’’ Police were told that the woman and the witness informed nightclub staff about the incident and requested that Edelman be removed from the club.

At the time of his arrest, Edelman denied groping the woman to police.

News of the charges being dropped came at about the time the Patriots were beginning their practice at Gillette Stadium. Edelman, who was not spotted in the locker room but was on the practice field, released a statement through the Patriots.

“I am very appreciative of the hard work of the County’s public officials and of my attorney, Amy McNamee,’’ Edelman said in the statement. “I am humbled by the support of my teammates and the Patriots organization. I’m just looking forward to focusing on football.’’

Prosecutors yesterday also released surveillance video from Storyville of the night of the incident. According to a release by Suffolk County District Attorney Daniel F. Conley, evidence gathered by analyzing the surveillance tape and conducting interviews with the accuser and witnesses indicates the physical contact between Edelman and the woman was fleeting, and did not meet the elements of any crime.

“To constitute indecent assault and battery,’’ the release said, “physical contact must be intentional; potentially physically harmful or an affront to the victim’s integrity; fundamentally offensive to contemporary moral values; and without justification or excuse. Prosecutors could not prove these elements with the evidence contained in the surveillance imagery, witness statements, and other sources.’’

The notoriety of the accused, according to an official, had nothing to do with yesterday’s result.

“The decision was based solely on the provability of the case,’’ said Jake Wark, press secretary for the Suffolk County District Attorney’s office. “The identity of the parties had absolutely nothing to do with the decision.’’

Messages left yesterday for Timothy J. Bradl, an attorney representing the woman, were not returned.

Edelman, a third-year player from Kent State who was picked in the seventh round of the 2009 NFL draft, has helped the Patriots in all three phases this season. He has three receptions for 27 yards, made 10 tackles as a defensive back, and is averaging 11.7 yards on his 23 punt returns, which included a 72-yard touchdown against Kansas City.