In grand scheme, some hope 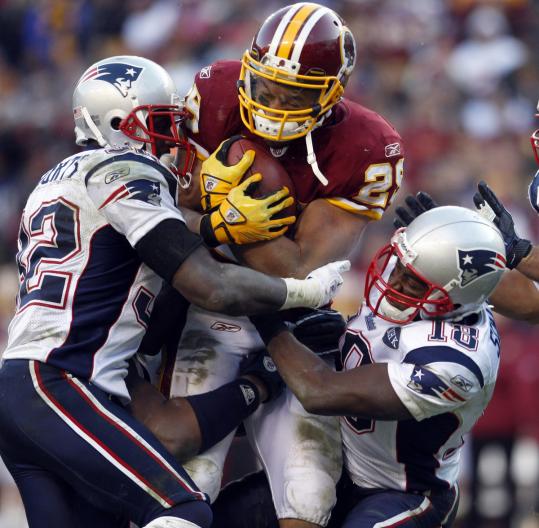 Redskins running back Roy Helu, who had a big day against a Patriots defense that showed signs of improvement, is stopped by the teamwork of Devin McCourty (left) and Matthew Slater. (Evan vucci/Associated Press)
By Greg A. Bedard Globe Staff / December 14, 2011
Text size – +

If the Patriots are going to make a postseason run - and that’s still abundantly possible no matter what you thought of their 34-27 victory over the Redskins Sunday - two things are going to have to happen.

For one, the Patriots are going to have to be nearly perfect on offense.

Tom Brady might have been frustrated in the final moments of Sunday’s game, but the Patriots played exceedingly well offensively against the Redskins.

If not for a few poorly timed mistakes, the Patriots could have scored in the 50s and likely should have.

Maybe that’s why Brady was so ticked off.

He also probably wasn’t thrilled the defense gave up nine plays of 20 yards or more to a Rex Grossman-led offense.

That simply can’t happen in the playoffs.

The Patriots don’t have to shut down the opponent - they don’t have the talent to do that - but they need to make them work as hard as possible and hope for a few miscues along the way.

If there’s a silver lining in the defense’s overall poor performance against the Redskins, it’s this: Bill Belichick feels good enough about the way the players take coaching to greatly expand the defensive package.

The Patriots really spun the defensive play-calling wheel and that gives schematic hope heading into the postseason.

For the first time all season, the Patriots played nearly the entire game in a base 3-4 defense with some nickel and dime sprinkled in.

That’s a comfort zone for many of the players and even defensive play-caller Matt Patricia.

The Patriots dialed up a season-high 12 blitzes against the Redskins and even threw in a zone exchange for good measure.

That’s the kind of unpredictability the Patriots have gone without all season.

Belichick said he went with the 4-3 early on, in part because the lockout wouldn’t enable the many newcomers to get the scheme. The Patriots have played 17 games including the preseason. That’s a lot of football.

Whether they can execute it well enough to win in the postseason is the question. They obviously did not against the Redskins.

But at least they’re trying some different things.

The big question is personnel, and you can tell Belichick is trying as many combinations as possible. Being 10-3 buys you a lot of time to try different things.

And we’re not talking about Matthew Slater at safety. He is merely a caretaker and will not be playing when Patrick Chung returns.

At this point, Slater is fast and won’t let defenders get behind him - something the only other safety on the roster, Sergio Brown, can’t be trusted to do.

Slater can’t stay on the field if Belichick wants to use his preferred defensive tactic of being unpredictable and changing coverages.

Against the Redskins, Mark Anderson and then Andre Carter played outside linebacker. Dane Fletcher was in the lineup where Brandon Spikes will be. Once Chung returns, James Ihedigbo can use his versatility near the line of scrimmage better since a capable safety can roam the back end.

Schematically, the Patriots are making progress on defense. They are beginning to do the types of things that make postseason success possible.

But the Patriots didn’t make enough good plays against the Redskins.

Getting the right players in the right positions is the next chore in the final three games.

A look at the positional ratings against the Redskins:

Quarterback Rating: 4 out of 5

A 60 percent completion rate from Brady isn’t anything to write home about, but like matchups against the Jets, Cowboys, and Steelers, there was a lot on his plate and he played very well. If Aaron Hernandez and Wes Welker don’t drop touchdown passes and Tiquan Underwood breaks harder and runs parallel to the end line on the final pass, we might be talking about Brady’s best game of the season. Redskins defensive coordinator Jim Haslett blitzed 13 times and about half (six) came on Brady’s first eight attempts. It was similar to Romeo Crennel’s plan with the Chiefs. The book on Brady is to have a chance, you need to make him feel pressure early and hope that speeds him up for the rest of the game. It worked in the early going. Five of his six poor passes or decisions came on the first five drives.

This was an average performance all around from the backs and the offensive line. We’ve certainly seen worse out of the group. Patriots had a great play call on second-and-9 on the third series, when the Redskins brought another blitz. Offensive coordinator Bill O’Brien called a screen to BenJarvus Green-Ellis, but he dropped it. It was set up to be a big play. Danny Woodhead probably wants the first-down run at the Redskins’ 6-yard line on the final drive back. It wasn’t an egregious misread, but if he was just a sliver more patient and bounced it outside instead of inside, he might have scored.

Receivers Rating: 4 out of 5

Two big drops by Welker and Hernandez, and the route by Underwood on the interception, were the miscues. The group was outstanding all around, with Rob Gronkowski, Welker, and Hernandez combining for 14 above-average pass plays both in catches and yards after the catch. Even Chad Ochocinco got into the mix with an outstanding route on a big third-down reception. That’s what they hoped he would bring all season. Why he couldn’t help take the place of an injured Deion Branch is a mystery. Ochocinco’s knowledge of the playbook must still be lacking.

Offensive line Rating: 4 out of 5

Brady should buy left tackle Matt Light and rookie right tackle Nate Solder something nice this week. Both were stellar dealing with outside linebackers Brian Orakpo and Ryan Kerrigan. Light continues to play terrific. He and Woodhead had some confusion with a stunt on Brady’s interception, when Orakpo got an open shot, and that ended a streak of 137 snaps in which Light allowed one pressure (a hold against Tyler Brayton of the Colts) against Pro Bowlers Trent Cole (Eagles), Dwight Freeney (Colts) and now Orakpo, whose only hurry came in his one matchup with Solder. Light blanked Orakpo in 24 one-on-one battles. The holding call against Light on a Woodhead run was bogus. Solder was nearly as good against Kerrigan, a promising rookie: one hurry on 24 one-on-one matchups. Logan Mankins (three hurries, two poor run blocks) had another rough go, mostly against tackle Stephen Bowen, who blew up Mankins at the point of attack on a big third-and-1 run that went for no gain in the fourth quarter. Nick McDonald got his second straight start at center and gave up a sack and a knockdown.

Defensive line Rating: 3 out of 5

After getting one pressure in the previous two games, Carter was back with a sack (forced fumble), hurry, and five quarterback knockdowns against undrafted rookie end Willie Smith and journeyman Sean Locklear. Carter did fail to take down Grossman on a third-and-7 play that went for 10 yards. Vince Wilfork had two stuffed runs but also got shoved out of his gap twice. His personal foul penalty was a good call. Wilfork led with his elbow. If he leads with his hand, there would have been no call. Brandon Deaderick had one of his best games of the season with a coverage sack, a hurry, and two strong plays against the run. Ron Brace made two nice stops on goal-line runs. Kyle Love was inconsistent. He made some terrific plays but as the game wears on he can get shoved around.

Linebackers Rating: 3 out of 5

Anderson was a surprise starter at outside linebacker in the 3-4. He didn’t have much of an impact and was essentially replaced by Carter after failing to contain Roy Helu on a 26-yard run. Fletcher instantly brought live legs. He had a knockdown, two stuffed runs, and two other strong plays against the run. Fletcher played well most of the time, but there are occasions in which he tries to do too much and is too aggressive. On the 12-yard gain by Helu with 8:58 left in the third quarter, Fletcher probably should have tried to stay flat against the stretch play instead of getting hung up with Smith. A similar situation happened on the 15-yard run by Evan Royster late in the third quarter. Fletcher went inside the tackle and Royster went outside. Jerod Mayo showed him how to do it on the next play when the Redskins ran a similar play to the weak side. Mayo played straight up with Smith and when Royster came through, he stuck his helmet in. It was a 3-yard gain instead of 15. But Fletcher’s aggressive play does pay off at times. More playing time will allow him to be more consistent. Mayo had a knockdown early and the interception off a deflection late. In between he didn’t have much of an impact. He struggled getting the right depth in pass coverage at times.

On the 51-yard pass to Donte Stallworth on the Redskins’ second drive on third-and-9, the Patriots were in Cover 3 with Slater as the deep safety and cornerbacks Devin McCourty and Kyle Arrington helping to divide the field. McCourty can’t let the receiver get behind him. Slater was correct in not providing help because Santana Moss threatened a vertical route before pulling up. McCourty looked like he had designs on undercutting the route but Stallworth stayed vertical. McCourty’s pass interference penalty on third-and-18 with 4:32 left in the first quarter changed the game. The Patriots might have blown the Redskins out if McCourty doesn’t hook Jabar Gaffney. McCourty must have gotten caught peeking in the backfield on the Redskins’ first touchdown. It didn’t appear that Ihedigbo was supposed to help. He was watching the tight end, which stayed in to block. On David Anderson’s touchdown on third-and-goal that tied the score at 27, it would have been more effective if McCourty stayed with Anderson after the pick play into the flat and passed Gaffney off to Ihedigbo. Either way, the Redskins probably have a touchdown. Great call against a two-man blitz by the Patriots. The Patriots are a heavy blitz team on third down and in the red zone. The Redskins caught them. But McCourty didn’t play it well from the start. A good solid jam might stop the play.

Fletcher started with a terrific tackle on the opening kickoff. That’s where he’s really going to help the Patriots. Julian Edelman and Niko Koutouvides each had two tackles. Brown showed nice awareness downing Zoltan Mesko’s best punt, at the 2-yard line. Stephen Gostkowski didn’t have one touchback. Not sure if that was by design. The kicking game overall was average on a tough surface.