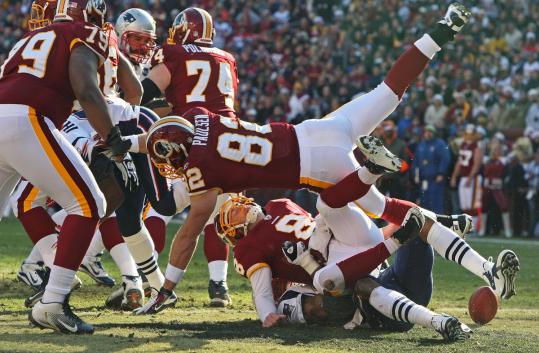 Redskins quarterback Rex Grossman (8) is stripped of the ball - and some of his dignity - by Andre Carter on the play that led to Vince Wilfork’s first touchdown. (Jim Davis/Globe Staff)
By Shalise Manza Young Globe Staff / December 12, 2011
Text size – +

Yesterday, he got the score that had eluded him, though Wilfork said it didn’t happen as he’d envisioned.

Three plays into the Redskins’ second possession, on third and 9 from their 5-yard line, Andre Carter beat rookie left tackle Willie Smith and drilled Rex Grossman in the back, forcing a fumble in the end zone.

Rob Ninkovich was the first Patriot to get a hand on the ball, and then Wilfork came diving in to grab it, holding on at the bottom of a pile for his long-awaited first touchdown.

“It wasn’t what I thought it was going to be, but a touchdown is a touchdown,’’ Wilfork said. “I saw the ball come out and I just went to get it; I’d let the refs decide if it was a fumble. I had to fight for it in the pile.’’

Wilfork kept the ball, and presented it to his wife, Bianca, who travels to every road game.

“Any time I do my thing with the ball, if she’s in reach she’s getting the ball,’’ he said. “She was waiting for me.’’

“Vince has certain personal goals he has set for his career, and getting a touchdown has always been one of them,’’ she said in an e-mail. “I was so proud of him, between that and his two interceptions this year, we are just grateful and humbled.’’ After making one catch for 8 yards in the first half, Wes Welker played a bigger role in the second half, finishing with seven receptions for 86 yards and a touchdown.

Welker has an even 100 catches on the season, the fourth time he’s reached the century mark, all four as a Patriot.

Welker is just the third receiver with four 100-catch seasons, joining Jerry Rice and Marvin Harrison. No player has ever recorded five.

Welker’s 24-yard touchdown catch, in which he beat D’Angelo Hall in one-on-one coverage, was his ninth of the season, a career high. He had eight in 2007, his first season with the Patriots.

The 30-year-old Welker, who is in the final year of a five-year contract, has 532 receptions for 5,875 yards as a Patriot, both of which rank third in franchise history.

After his last-minute interception, linebacker Jerod Mayo limped off the field.

“Just a little cramp in the calf,’’ he said. “When it’s cold outside you don’t think you’re sweating, but you really are.’’

The game-time temperature was 40 degrees.

Nick McDonald started at center for the second straight week, but was replaced for a bit in the second half by Ryan Wendell.

According to McDonald, the move was not performance-based.

“We didn’t know when it was going to happen, but we knew they wanted to get [Wendell] some reps to get him back up to speed,’’ McDonald said.

McDonald returned, and finished the game.

Dan Connolly, who stepped in as the starter when Dan Koppen broke his left ankle in Week 1, missed his third straight game because of a groin injury.

Redskins coach Mike Shanahan was asked if he was considering going for a potential winning 2-point conversion had Washington scored a touchdown in the final minute.

“Oh, yeah,’’ he said. “You have to get a little lucky with the [overtime] coin flip. Those are the things that are going through your mind at the time. You have to feel good about your 2-point play. Unfortunately, we didn’t get a chance to see, either way.’’

The Patriots have faced a 2-point conversion just once this season, stopping the Raiders in the fourth quarter of a 31-19 win in Week 4.

It took 13 games, but a team finally passed for at least 300 yards against the Redskins. Tom Brady threw for 357 yards and went 22 of 37, including three touchdowns. His fourth-quarter interception was his first in 202 attempts, which had been the NFL’s longest active streak . . . It also took 13 games, but the Patriots finally allowed a 100-yard rusher. Redskins rookie Roy Helu carried 27 times for 126 yards, the third straight game he’s topped 100 . . . Defensive end Eric Moore, brought back to the Patriots on Saturday, said he was “kinda, sorta’’ surprised to hear that the team wanted to re-sign him. The call was the first time Moore had heard from the Patriots since his release in early September. “I know what’s going on, so I guess that’s why they brought me back,’’ he said . . . Redskins starting right tackle Jammal Brown suffered a groin injury in warm-ups and did not play. He had been listed as questionable with a hip injury . . . Chad Ochocinco had one reception, a 15-yarder on third and 10 in the second quarter that led to a field goal. He has 13 catches in 12 games this season . . . Deion Branch was said to have suffered a groin injury during the game, while James Ihedigbo had to be tended after suffering a shoulder stinger for the second straight game . . . The Patriots won on the Redskins’ home field for the first time, having lost on their two previous regular-season trips to the D.C. area . . . NFL Players Association head DeMaurice Smith, a Redskins season ticket-holder, attended the game. In the hallway outside the Patriots’ locker room after the game, he and Brady were engaged in conversation . . . The Patriots’ inactives were Ryan Mallett, Gerard Warren, Patrick Chung, Brandon Spikes, Shane Vereen, Sebastian Vollmer, and Connolly. Warren’s healthy scratch was a surprise.

Michael Whitmer of the Globe staff contributed to this report.