THIS STORY HAS BEEN FORMATTED FOR EASY PRINTING
Patriots 34, Redskins 27

Patriots hold on for victory over Redskins 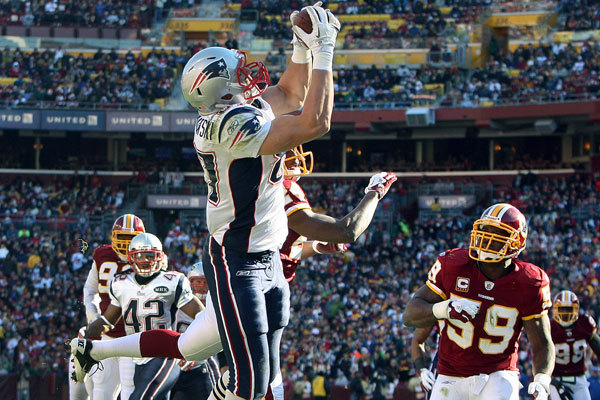 LANDOVER, Md. -- The Patriots escaped Washington with a 34-27 win over the Redskins today thanks to a goal-line interception from Jerod Mayo in the closing seconds.

Redskins receiver Santana Moss was a scapegoat not once but twice for his team: he had a touchdown taken off the board when he was called for offensive pass interference, and it was a pass attempt from Rex Grossman to him a couple of plays later that he bobbled. Moss batted the ball as he tried to get a grip on it, and Mayo plucked it out of the air for his second interception in as many weeks.

After a booth review confirmed that Mayo held onto the ball, Tom Brady took a knee to run out the clock, and New England was able to breathe a sigh of relief.

New England is now 10-3 on the year, though it was far from a solid effort for the team and also included a verbal altercation between Tom Brady and offensive coordinator Bill O'Brien; O'Brien had to be pulled away from the quarterback by Bill Belichick and others.

The episode came after Brady threw an end-zone interception on a pass intended for Tiquan Underwood. Underwood may have run the wrong route on the play, and Josh Wilson pulled the ball away from Underwood.

"I deserved it," said Brady. "I threw a pretty bad interception so he wasn't happy with that. There is probably a long line of coaches and players that were pretty pissed at me."

A few minutes after the fireworks, Brady and O'Brien were sitting next to each other on the bench.

For the second week in a row, the Patriots saw an anemic offense score fairly easily on them: last week the Colts' 24 points tied their season high, and this week it was Washington, who came into the day scoring just 16.8 points per game, 27th in the NFL.

The Redskins had 20 points at the half, the first time since the Patriots' Week 12 loss in New Orleans two years ago that they've given up that many points in the opening half of a game.

New England got on the board first in an unconventional way. With the Redskins backed up to their own end zone and facing third-and-9, Andre Carter beat left tackle Willie Smith, who was making his first start due to the four-game suspension usual starter Trent Williams was handed by the league earlier in the week for violation of the drug policy. Carter drilled Grossman in the back, and the quarterback dropped the ball; Vince Wilfork fell on it in the end zone for his first career touchdown.

Wilfork delivered the ball to wife Bianca, who was seated right behind the Patriots bench in the stands. The nose tackle had another strong game, building on last week's effort against Indianapolis, and is turning in another standout season despite playing a higher percentage of defensive snaps than ever before.

But New England's third-down defense, which has had its share of ups and downs, was in a down pattern Sunday. When the Skins got the ball back after Wilfork's score, Grossman completed a 51-yard pass on third-and-9 to former Patriot Donte Stallworth. Washington, however, could not get into the end zone and had to settle for a chip-shot field goal from Graham Gano.

New England answered with a two-play, all-Gronk drive. First Brady found Rob Gronkowski for a short pass that the tight end turned into a 49-yard gain. Gronkowski realized he wasn't downed by safety DeJon Gomes, getting up and escaping sideline tackles by both Gomes and Reed Doughty and staying inbounds, then finally stumbling forward a few steps after Josh Wilson dove at his knees. Redskins coach Mike Shanahan challenged the play, but it was confirmed.

On the very next snap, Brady looked to Gronkowski again, with a pass in the end zone that was too high for defenders but not the 6-foot-6-inch Gronkowski.

Redskins defensive back Josh Wilson said of the Patriots tight end, "The guy's a gargoyle."

Gronkowski spiked the ball then chased after it, realizing he wanted to keep it as it was his record-setting 14th touchdown of the season, the most ever for a tight end. Gronkowski briefly held the record last week, but the official ruled his third touchdown against the Colts a lateral, and therefore a rushing score.

Washington responded with a touchdown to another former Patriot, Jabar Gaffney, cutting the score to 14-10. The Patriots scored two more field goals before the half and the Skins had a touchdown and field goal for a halftime score of 20-20.