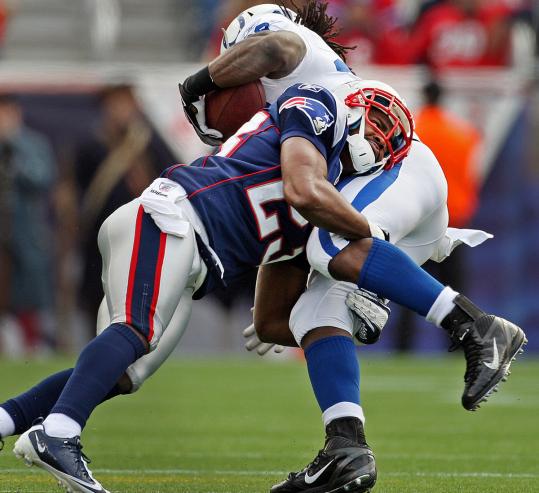 FOXBOROUGH - Matthew Slater, who hadn’t taken snaps at safety, even in practice, for two years, started at that position. Niko Koutouvides, who hadn’t started a game in seven years and hadn’t played a snap with the Patriots’ defense this season, was with the first 11 at linebacker. Nate Jones, signed less than a week ago, got a start at safety as well.

The defensive personnel coach Bill Belichick had on the field Sunday against the winless Colts raised eyebrows. It also raised questions about whether Belichick saw the Colts as the challenging opponent he claimed they would be, or whether he used the game to get inexperienced players snaps all over the field.

Belichick said yesterday he isn’t concerned about the reactions.

The Patriots did win, 31-24, against Indianapolis and quarterback Dan Orlovsky, a journeyman with no experience with winning in the NFL. In 2008, he started seven games for the Lions, the first team to go 0-16, and last week was named starter of a team that entered Sunday’s game 0-11.

“I thought Nate did a good job,’’ he said. “He wasn’t even familiar with what we were doing, so he had a steeper learning curve, but he’s a more experienced player, so there’s a tradeoff there.

“He played the defenses pretty well, was good in communication, got his hands on a couple balls, made a few plays. It was far from perfect, but I thought he did a good job.’’

His comments about Slater were similar.

“There were certainly things he could have done better,’’ Belichick said. “For his first game back there - he really hadn’t had a lot of practice time back there either, to be honest with you, this year, although he’s done it in the past - we didn’t have a lot of assignment problems. We had some execution problems, but we played pretty well through a big stretch of the game.

As was the case during his postgame news conference Sunday, Belichick didn’t seem to be in a great mood yesterday despite the victory.

He did not give players the day off, as he often does after late-season wins, and in meetings he emphasized the team must play better.

Receiver Taylor Price, cut by the Patriots Saturday to make room for offensive lineman Nick McDonald, was awarded to the Jaguars yesterday. Jacksonville, Miami, Tampa Bay, and the Jets all put in waiver claims, and the Jaguars, by virtue of their 3-8 record, had priority.

Price had five catches for 105 yards and a touchdown against the Jaguars in the preseason this year, one of the few standout moments of his brief New England career.

Asked for a reason or two Price, a third-round draft pick a year ago, was released, Belichick said, “I would say it just didn’t work out. I don’t know what else. That’s probably the easiest way to put it. It was a combination of factors. In the end, we felt like we needed Nick McDonald [against Indianapolis], so we had to create a spot for him.’’

The Patriots are off the hook for the two-plus years remaining on Price’s rookie contract.

Mayo on the ball

Jerod Mayo collected the first interception of his four-year career in the fourth quarter Sunday, and he did it in rather impressive fashion, diving across the middle of the field, arms outstretched, to pull in the ball.

Belichick liked the play, too.

“It was really an outstanding play that he made on the ball,’’ the coach said. “A lot of players probably wouldn’t have made that catch, but the fact that he not only got to it, but then actually caught it, was a heck of a play. I’d say overall pass defense is a strength of Jerod’s.

“In practices he’s certainly gotten his hands on balls. But the first one in a game was good - opportune time.’’

Mayo also broke up a potential touchdown pass in the first quarter.